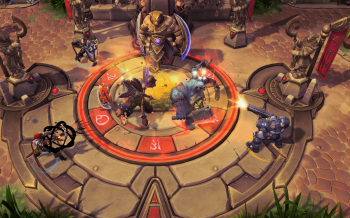 A friend playing on my team was absolutely dumbfounded - and actually upset. As a hardcore gamer and experienced MOBA player, he was left disgusted that we could have won that game, and actively wanted us to lose so as to not reward the inexperienced players on our team for the mistakes they were making. In his opinion, the early- and mid-game in Heroes are completely meaningless, since the match's outcome is ultimately decided by one or two final plays in the late-game, and that it's absurd that a team can be winning throughout the entire match and then lose because of one team fight.

I argue, on the other hand, that if a team is truly dominating, the late-game won't ever be reached (I've had my share of 13-minute victories, as opposed to the more typical 20-minute games), and that comebacks are only possible because the winning team isn't performing as well as it appears to be. So yes, comebacks are possible, and that's what keeps the game exciting for me, because it means the outcome of a match isn't determined in the first five minutes. Had a rough start? At least you don't have to suffer through another 15 minutes of slow, steady loss. Gained an early lead? At least you won't grow bored as you spend the rest of the game slowly progressing to assured victory. The winning team cannot grow comfortable in its position and start to slack - the players must continue to play at the top of their game throughout a match to ensure victory, and I cannot see why that's a bad thing.

But is that the reason I like Heroes and not other MOBAs? I'm sure it ties into things. Admittedly, the ability to instantly recognize just about every hero and have a fair idea of what to expect from them thanks to a familiarity with Blizzard's franchises is a draw. Being presented with an enormous pool of characters in other MOBAs felt daunting - I felt I needed to memorize a Periodic Table of Champions before I could even start to consider myself ready to play and not drag my team down. I suppose Heroes may pose the same challenge for those unfamiliar with Blizzard's other titles, but... let's be fair - the majority of people playing Heroes have played another Blizzard game.

A game of Heroes also ends quicker than most other MOBAs, with an average of 20-minute matches. Teamfighting happens more often and sooner, without a prolonged period of what effectively is warm-up before the real game starts. Games feel faster and more action-packed. The different maps help keep things fresh. All of these are points in favor of Heroes, but really, I believe the greatest factor for me was the choice to drop itemization from the game. Managing gold as a resource - knowing how and when best to acquire and spend that gold - felt like a major hurdle to mastering a game and, simply, not a fun mechanic for me. You can argue that's a defining characteristic of the MOBA genre, in which case, I suppose I don't like MOBAs... I like Hero Brawlers.