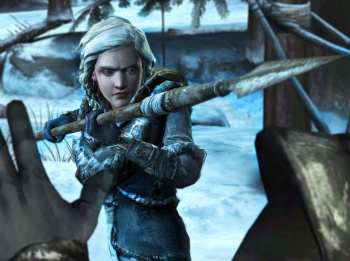 But it's the personal drama itself that really tugs on the heartstrings. Rodrik is perhaps the weakest ruler in the Forrester's history, both physically and metaphorically. He has no authority or military strength to repel the Whitehills - especially since doing so could draw the ire of the sadistic Ramsey Snow. And thanks to his physical injuries, he's barely capable in a one-on-one match with Gryff, the youngest Whitehill son with a massive chip on his shoulder. But hands-down the most heartbreaking confrontation is with his finance Elena, whose father is reconsidering their engagement in light of the changing political climate.

Through it all, Rodrik's nobility and inner strength shines through as he fights for his people. The visual of a broken leader slowly rising to oppose a powerful foe is immensely compelling and satisfying, even if the encounters don't always turn out as you hoped. Depending on your choices, Episode 4 can offer a fantastic climax when you find potential allies against not only Gryff, but his father Ludd. Of all the Forresters, Rodrik's story in Game of Thrones is the most consistently compelling - here's hoping Episode 4's latest twist doesn't herald an early end for it.

Not that the rest of the Forresters aren't engaging in their own right. Episode 4 was my favorite portrayal of Mira so far as she finally finds her place in King's Landing's hostile social circle. Previous episodes clearly established her as an innocent handmaiden well out of her depth, constantly disappointing either Queen Cersei or Lady Margery. But with a conspiracy against her house underway - one that even personally targeted Mira with an assassin - Mira truly steps up play the Game of Thrones, uncovering secrets with deception to get what she needs.

What makes Mira's depiction especially satisfying here is there's more than one way to play the game. For example, the player could choose to be cold and threatening like Queen Cersei, but Lady Margery's killing-with-kindness approach is equally manipulative - and perhaps more satisfying. Finding a choice that leads to success and turning the tables with a "You're not threatened by a handmaiden" line makes Episode 4 one of Mira's greatest victories. The question now is whether any moral compromises she made along the way will have consequences in Episodes 5 and 6. 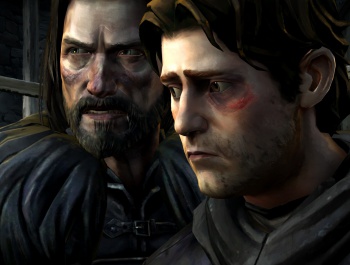 Gared Tuttle doesn't have quite as much to do in Episode 4, but that perhaps that's fair - he's already spent the past few chapters filling in as this game's best noble hero. More so than perhaps any other character, Tuttle tries to do the right thing - and usually ends up punished in response. Attempting to save his father's life gets him sent to the Wall. Tracking down the North Grove will put him in opposition to his Night's Watch brothers. But that all pales in comparison to Episode 3, when the man who killed his family arrives at the Wall as his latest brother.

As you can imagine, the encounter doesn't end well - which means he's now an outcast among the Night's Watch as well. His only remaining option is to flee among the Free Folk and hope he can find the North Grove. As such, there are very few choices that carry the same weight, but there is some fantastic foreshadowing. No matter what happens to the Forresters, it's very clear Tuttle's story will be the most tragic - and depending on what exactly the North Grove contains, his sacrifices could be the most necessary.