Developed by Gambrinous. Published by Versus Evil. Released July 17,2015. Available on PC(Reviewed) and Mac. Review copy provided by publisher.

You might think you've seen everything there is to see when it comes to exploring dungeons, fighting baddies, and collecting loot, but if you've never played Irish indie studio Gambrinous' Guild of Dungeoneering, you've probably still got something to learn. Where you've likely enjoyed exploring in games as the hero like in Diablo, and you may have enjoyed building dungeons for others to die in, as you'd see in titles along the lines of Dungeon Keeper, GoD puts you in the precarious position of having to build the dungeon around an autonomous hero, with the goal of keeping them alive. 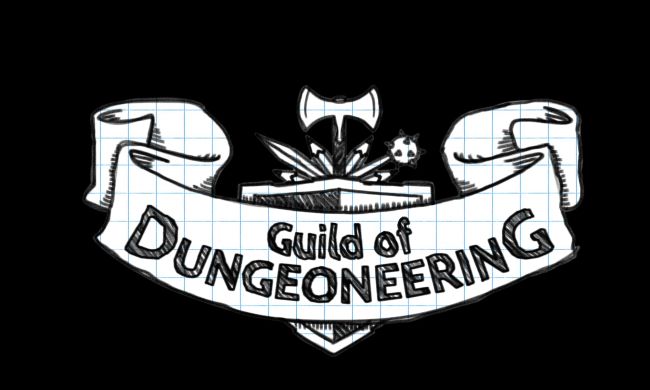 In GoD, you take on the role of Guild Master vying to bring glory to your own guild, while taking the pesky do-gooders of your rival guild down a notch. You're a startup guild, however, so you'll start with a minimal guild hall and a single mediocre-at-best adventurer. As you expand your guild hall with new rooms, you'll gain access to new, less terrible classes, unlock new equipment to find on your adventures, and valuable talismans that offer powerful enhancements to your adventurers. Building a guild hall isn't free, of course, so you'll need to send your crew into the dungeons to slay baddies, complete quests, and gather loot. There are three tiers of room you can build - rooms cost 50, 500, or 2000 gold, depending on their tier - which, as above, unlock classes, trinkets, or gear to loot within a dungeon. Aside from unlocking at least one class from the next tier, you'll almost certainly want to focus on the gear unlocks, since they're going to be what decides whether you win or die in the next dungeon run. Which brings us to the other layer of gameplay; dungeon runs.

In order to further your guild's cause, you'll need to prove yourselves as an adventuring group, which means sending your hapless recruits into the most dangerous dungeons in the area. Unfortunately, you don't have the luxury of telling your guildie exactly how to act, instead being relegated to constructing the dungeon around them in hopes of coaxing them into doing what you want. Each turn, you'll draw a handful of cards consisting of dungeon tiles, which make up the layout of the map, treasure cards, which help lure your guildie into the rooms you want them to visit, and monster cards, which give your guildie a way to earn experience and gain equipment. You'll place up to three tiles at the beginning of the turn, though you don't have to place any if you don't want to, and then your guildie will decide where they're going to meander. They're attracted to monsters of the same level and treasure, but they'll usually run away from higher level monsters. Half the fun of dungeoneering is figuring out how to convince your guildie to go to your objective, rather than wander towards that shiny treasure chest in the other direction.

When your adventurer lands on the same tile as a monster, it's time to fight. Fortunately, you do have control of how your hero squares off against the enemy, so you don't have to rely on the deliberately-obtuse AI that controls their movement. Combat is a CCG-style affair, where each combatant has a deck of cards that they draw from and play to try to kill the other with damage, while staying alive themselves. There are only physical and magic damage types, so the card game combat isn't as complex as you've seen from Hearthstone or Magic, but it's delightfully well implemented here, with a surprising eye on balance. You'll find that an impressive portion of your fights will result in you barely eking out a win, or dying as you strike the killing blow.

An interesting twist on the CCG mechanic is how cards are added to your deck. You'll begin each dungeon with a deck of low-powered cards based on the class you chose. Each time you defeat a monster or open a chest, you'll be presented with some equipment to choose from. Gear gives your character keyword traits, like "Fire 1" or "Stupidity" which gives you Fire-based magic cards and blank cards that will waste your turn respectively. As you level up these traits, however, such as by equipping two items with "Fire 1" you'll get access to the next tier of Fire spells. Tier 4 is the highest, with both Tier 3 and Tier 4 offering significantly more powerful cards than 1 or 2. This makes it particularly effective to specialize by focusing on a single trait, rather than diversifying. Some gear will offer a health bonus, which is incredibly important for your dungeoneer's survival since, as mentioned above, many of the fights will be seriously close, so a single point of health can spell the difference between success and failure.