Kalypso Media seems to be in a similar position as Deep Silver was a few years ago: decent-to-great games coming out, no major bad press about business practices (such as the split with Yager over Dead Island 2), and what seems to be an uncommon level of public trust. Thankfully, Crookz: The Big Heist continues the trend of worthy games, since as far as heist games go, it's among the greatest that have come out recently, second only to Payday 2.

The initial presentation of the game looks like someone took Monaco and injected it with distilled Austin Powers: Goldmember due to the game taking place in the '70s, and the characters definitely seem like they're from that time. The main character, Cleopatra, is one of the best black female leads I've seen in gaming, but that's not really a large pool to draw from. Instead of going the lazy route and literally stealing Beyonce's character traits from the previously mentioned movie, Skilltree opted to create an impressively soft-spoken and highly intelligent character. That trend carries through to all the characters, from the well-spoken dialogue to the subtle presentation. Bishop, the hippy lockpicker, has facial hair to spare, yet comes across as extraordinarily standoffish. Even Murray, the eventual antagonist, doesn't act like you'd expect; based on his appearance, I expected him to sound like the stereotypical Irish character akin to BioShock's Atlas, but is instead not only a normal-sounding American. He is, however, probably the smartest of the group overall. All of them are fairly well-defined through dialogue, which is rarely wasted on things other than character development. In the isometric view, they're also designed differently and have different colors, making finding them on the map amazingly easy.

Crookz takes an approach similar to Shadowrun Returns for perspective and uses a pauseable real-time gameplay style, almost entirely fulfilling my personal desire for a third-person stealth game that isn't Alpha Protocol. I found controlling multiple characters at once annoying, but that's something I've had a problem with for years, which I think is a problem with me instead of the mechanics inherent in that style. Part of me thinks it could have worked better in co-op, but the sheer potential for other people trolling by getting caught (which instantly loses the map) throws that idea out the window. The map can be fully moved, with controls surprisingly similar to Tropico, also published by Kalypso, which did actually give me a bit of a leg up. 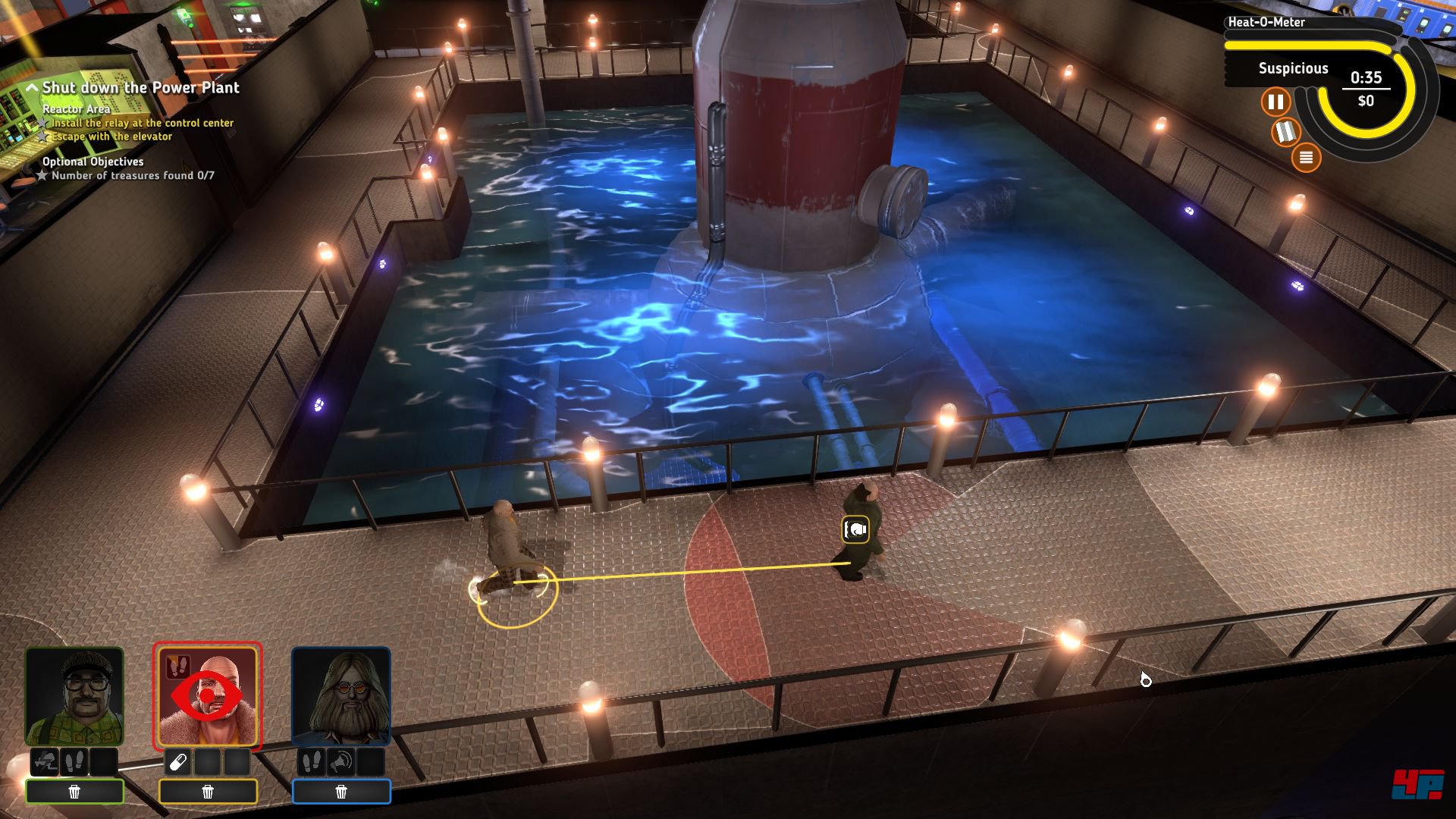 The main thing that makes Crookz (a name I really dislike, by the way) good is the rules of the game. They're consistent almost to a fault, making exploiting them simple enough to make me think that's required at higher difficulties. Each level starts with a briefing and a planning phase, which for the strategically-minded, gives them a perfect chance to plan their run to the final detail. Security cameras tell you exactly what they see, the guards follow a set path, and after you knock a guard out with either Rufus the bruiser or chloroform, they check set areas regardless of the direction you came from. Some doors are unlocked with switches, which can be left-clicked or hovered over to show what they affect, while the same can be done with guards to see their patrol routes. New mechanics are added per level, like different switch types, new tools like the chloroform I mentioned, or additional character abilities like Lobkowitz the Technician being able to temporarily disable security cameras by looping the footage. The skills added by new characters or unlocked through progression also allow you to obtain things you couldn't get in previous levels, like the first stage having a Locked Strongbox, which requires Bishop's second ability to unlock. There are also tools that let you duplicate other abilities with a slight drawback. A crowbar can get you past most locked doors, but it creates noise you don't get when lockpicking.

The problematic part for me was difficulty within the same "level," which is measured in stars numbering from 1 to 5. The first two levels go from a simple break-in to steal a fake version of the first plot object to breaking into a fairly large bank to grab some plans for a museum where the genuine article is being shown, with the map increasing in security and size accordingly. After a few stages, I managed to get a handle on the game, but the stage I'm on now, involving a prison break, seems to be a bit too much for my lack of skills to handle. This, of course, comes from a lack of familiarity with the subgenre of heist games, something that's easily not true for everyone. I expect a decent number of people will find the beginning stages simple to finish with all the potential loot placed throughout the level (or as much as can be gotten the first time through) which is where the Challenge Mode comes in.

The first stage outside of the tutorial is a one-star stage, the lowest difficulty. The first Challenge Mode stage not only starts at three stars, but you have a set crew to work with and your items are pre-selected, removing a great deal of choice as well as doing things like making the guards tougher and giving you a time limit. It's set on the tutorial level, which is both efficient design and good for the player since it's something they've already seen. It's also a well-designed level to me, level design being something I'm quite familiar with myself.

Bottom Line: It's good enough that it's easily worth the $30 price for fans of heist games, yet still good enough for people like me to get it at about a 33% discount on Steam. If it's $20 or less at some point and it looks interesting, get it. The characters alone are worth the money.

Recommendation: If you're the kind of person who plays any genre that has a stage take longer than 20-25 minutes on average or wanted a non-lethal variation on Payday, this is something you should get as soon as possible. However, if you have trouble concentrating on the same thing for a long time if it's moving slowly, you might want to save your money for something more appropriate.