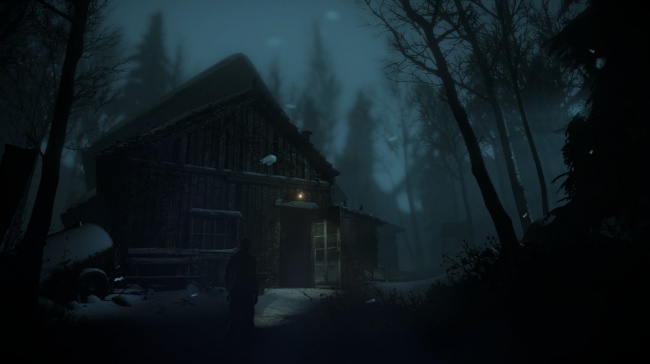 The game is also littered with files, pictures, cryptic notes and tidbits of seemingly useless information that slowly get pieced together to explain the game's major mysteries. At times, picking up all that paperwork can be rewarding, as far as collectibles go, because they directly influence character dialogue and sometimes even events. When one character who has walked through a scary mine meets up with another who waited in the haunted lodge, your collectible hunting informs their exchange, with the characters sharing information and figuring things out based on what they've learned.

So fairly often, Until Dawn is an effective experiment in interactive storytelling, and when it leans on horror movie tropes and ideas, it usually succeeds. It's often the game's video-gamey aspects that hold it back.

Until Dawn struggles with pacing: The game wants you to be informed about and interested in its eight characters, but you'll spend what feels like huge amounts of time with each one, to the point that you might lose track of others. Three or four whole chapters out of the game's 10 go by before one couple from the beginning shows up again, which is jarring enough to make you wonder, "Wait, who're they again, and where have they been this whole time?" This might be why the game insists on an annoying "Previously, on Until Dawn" recap about every 45 minutes - it knows it's too long for the way it wants to tell the story, and it's worried you're forgetting what the hell is going on.

It's also a generally clunky experience. Until Dawn started its life as a PlayStation Move game, and is full of strange-feeling motion control holdovers. Every time a character picks up an object, for example, you have to hold R2 to get them to actually grasp it, and then flip it over to learn anything about it. It's a meaningless mechanic that you'll do constantly the exact same way, and it does nothing but break the flow of any given scene or interaction.

Walking around is just as moderately irritating. Characters move slowly and are always getting hung up on stuff, especially because it's not always clear how to navigate a space. You'll spend most of the game slowly traveling down corridors and checking blind corners for collectibles. At least when two characters are together, they'll spend the time conversing, but when you're alone, these levels are just lengthy collect-a-thons. There's tons of slow-paced walking, and again, it doesn't add anything to experience; more like the developers thought that Until Dawn is a video game and requires video game-feeling things.

Luckily, though, the horror movie feel, the solid camera work and performances, and the (generally) intriguing script and characters make pushing past Until Dawn's issues feel worth it. Sure, the characters occasionally do something dumb, and you'll wonder why no gun seems to need reloading and no one has inquired about why the lights don't work in the lodge for the entirety of the game, but the scares and atmosphere come together nicely and you can get people killed fairly often and in gross ways. Trying to figure out exactly how you can keep characters alive only to screw up a reflex challenge builds a perfect kind of tension. If you can brave the portions where Until Dawn gets arbitrarily slow, the parts where it's moving quickly can make sticking around worth it.

Bottom Line: Until Dawn struggles with clunky video game elements and rough pacing, but mitigates it with B-movie slasher mainstays and a willingness to embrace player failure.

Recommendation: Best for horror movie fans, Until Dawn struggles in places but still manages to bring a fun and spooky experience.