Developed by Skyshine. Published by Versus Evil. Available on PC. Copy Provided by publisher.

Take one part tactical miniatures game, one part roguelike, and one part Oregon Trail. Blend it together with some Mad Max and a heaping helping of difficulty, and you end up with Skyshine's Bedlam, a post-apocalyptic game that is practically in its own genre. It tries to be a lot of things at once, and as a result can feel overwhelming. But if you can accept that you will die, and die a lot, you can at least have fun dying historic on the Fury Road Bedlam.

Bedlam has a lot of plot, but not a lot of story. It's the far future. Everything has dried up into a desert. Humans, cyborgs, mutants, and robots are all warring for the last few precious resources the world has to offer. Most people live in a hellish metropolis called Byzantine, ruled over by the selfish King Viscera and his bands of marauders. But rumor has spread about a paradise called Aztec City on the other side of the titular wasteland. Only the brave or the foolish would attempt to cross, but you just so happen to be both. So you pack up a band of 16 warriors and 1000-ish civilians into a gigantic moving fortress called a Dozer, and attempt to find a better home. It's too bad that King Viscera doesn't take kindly to deserters, and decides to give chase. At worse, he will kill you. At best, he will kill you and take Aztec city for his own. 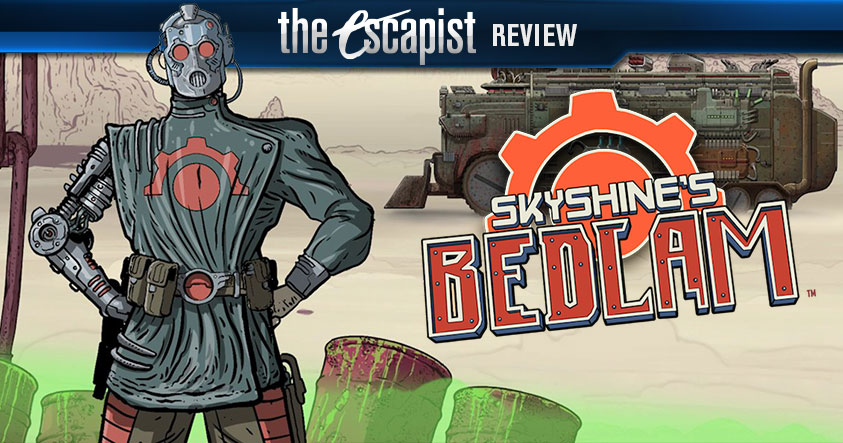 Thus, the game begins, and the story of Skyshine's Bedlam grinds to a halt. Although each individual member of your caravan has a full backstory, Bedlam eschews traditional storytelling for spurts of world building. Narrative is dished out in classic roguelike fashion, with an omniscient narrator describing your actions in the second person. This produces a feeling of detachment, which is appropriate for the post-apocalyptic world you are in, but makes it hard to attach yourself to any one character. Considering the ludicrous amount of permadeath you'll encounter this detachment might be a good thing, but I'll get to that in a bit. 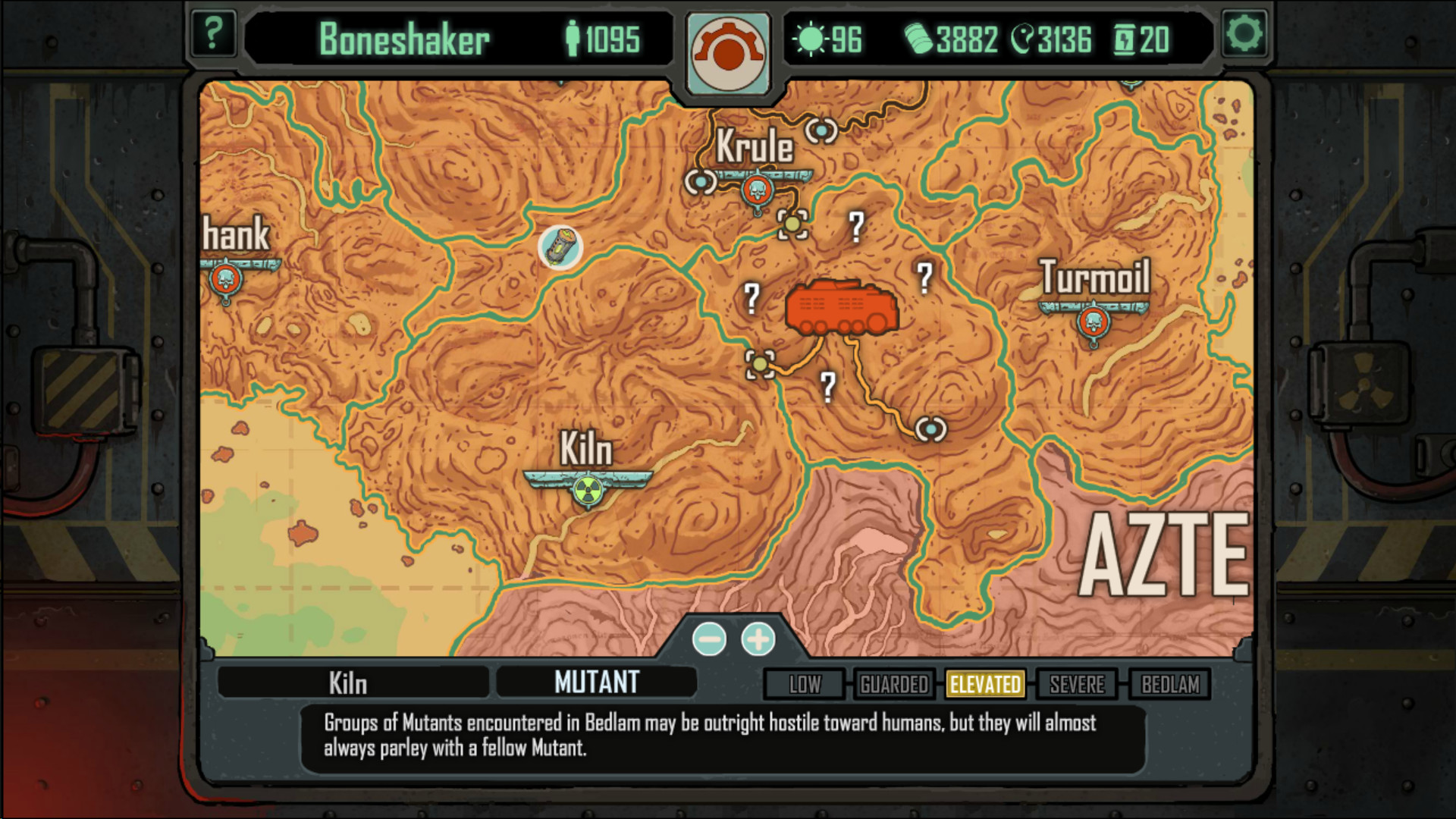 Basic gameplay takes place on a map with Byzantine on one end and Aztec City on the other. Your location is shown with several points of interest and travel destinations around you. Clicking on a point of interest will cause you to check it out, while clicking on a travel point will make your dozer move there. Either will cost you meat, to feed the residents of your dozer, and fuel, to make your dozer go. If you run out of either, you end up having to make tough decisions, like resorting to cannibalism, or converting dead bodies into fuel. It will also leave you open to bandit attacks. You have to strike a balance between pushing forward and exploring, in order to pick up more meat and fuel along the way.

Each time you travel you will be encountered with events and choices. Do you pick up the random band of travelers? Do you explore the strange caves? Do you raid the broken down fuel station? Most of these choices boil down to "will you fight for extra resources, or flee?"

And you will be doing a lot of fighting. Battles are the best place to earn resources, but they also put you at the most risk. Any character that dies in battle dies for good. Injured units take days to heal. Also, if the battle takes place in or near your own Dozer, losing the battle means you lose the game.

It's a good thing that battles are so incredibly fun. They run on the same engine The Banner Saga did, with a couple tweaks. Every turn you get two action points, which can be used to either move with a unit, or attack with a unit. Your units come in several varieties, including melee tanks called frontliners, short range shot gunners called trenchers, mid-range pistol wielding gunslingers, and long range snipers called deadeyes. The movement and range of these units varies wildly. Frontliners can move clear across the map, but do very little damage, while deadeyes can move one or two spaces at best and can only attack five spaces from their position, but do four times the damage of a frontliner. As I said before, it feels a lot like a tabletop miniatures game, where you do your best to position your enemy in such a way that you can spend double turns attacking with your most powerful units. It's simple at core, but individual interactions are varied and intricate.