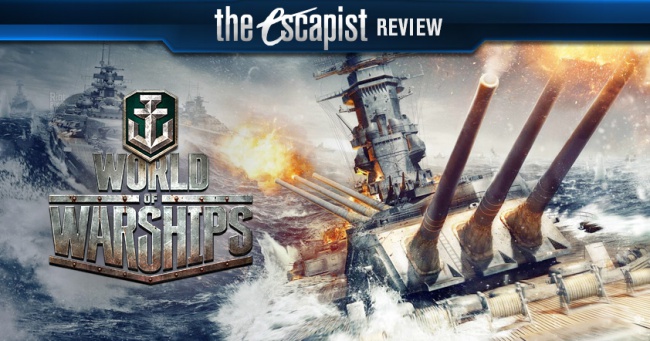 World of Warships is a free-to-play MMO where players command historic naval vessels in fast-paced battles for supremacy. It has no story, characters, or reason to progress outside of winning new ships or upgrades. It's the video game equivalent of taking a history professor's warship miniatures and making them fight in a bathtub. And it's an absolute blast. Whether you're dodging enemy torpedoes, launching artillery shells at a Battleship, or managing pilot squadrons flying above the waters, World of Warships sucks you into its waters until you're wishing you had time for one more round.

As you play World of Warships, you'll gain access to a fleet of Battleships, Cruisers, Destroyers, and even Aircraft carriers. Just like classes in a team-based shooter, each ship type supports a particular play style. Battleships are the heavies, capable of absorbing and dishing out insane amounts of damage. Destroyers are small, lightly-armored support craft, useful for scouting or rushing into position for a devastating torpedo attack. Cruisers are versatile mid-range ships, fast enough to move quickly in battle, but with enough weapons and defenses to put up a good fight.

Aircraft carriers are unique from the rest - they turn World of Warships into an RTS experience. Instead of controlling a single ship within the fleet, carriers are the mobile bases from which you can launch fighters and bombers. Aircraft carrier players are given a overhead view of the entire map, where they can assign flight patrols, bombing runs, or recall planes for repair and resupply. It's an interesting approach, although perhaps not one recommended for beginners, since the gameplay style is so different from other ships. But that doesn't mean Aircraft Carriers aren't valued - one or two well-managed Carriers can be essential resources for destroying a united enemy fleet.

Once you've chosen a ship, World of Warships drops you into a match where two fleets try to sink each other, or capture bases are located around the map. Standard battles give each team a base to defend while attacking the enemy. Domination mode puts 3-5 control points across the map which players have to focus their efforts on. Then there's Encounter, which places a single base at the map's center and lets both fleets duke it out to capture it. Each mode isn't so different from your average multiplayer shooter - but playing as warships arrayed with artillery guns and torpedo tubes completely flips that dynamic into something fresh and exciting.

What's truly impressive is how smooth and straightforward playing World of Warships can be. Traditionally, most PC war games are strategy-heavy affairs, where you micromanage a ship's functions just to get into firing position. But World of Warships' interface is so intuitive you barely need a tutorial to get the hang of it. Essential movement controls and ship functions are reduced to a handful of buttons, letting you focus on tactics without getting distracted by controls. After a single match, even brand-new players are well-versed enough to participate without falling too far behind. And unlike Starcraft or Call of Duty, you don't have to rely on lightning-fast reflexes to make meaningful contributions to the game.

That's not to say you'll be a World of Warships expert right away - there's a reason Wargaming is putting out tutorial guides after all. But the intuitive interface alone gives you a much better head-start than other multiplayer war games of its kind.