The G310 is Logitech's latest entry into the "compact keyboard" market - offering a small, lightweight solution for those who require a more portable keyboard: competitive gamers, hardcore lanners, frequent travelers, and the like. As a bonus - it's a mechanical keyboard, and it making use of Logitech's proprietary Romer-G mechanical switches.

Essentially the G310 is a stripped down version of last year's G910, cutting away the macro keys, media buttons, and numpad in order to make it as compact as possible. Gone too, is the ability to change the LED beneath each individual key, as the G310 simply glows the generic Logitech blue. The removal of most these features isn't really that big of a deal, as everyone bar hardcore MMOers shy away from macro keys, and customizable LEDs and media buttons are essentially pure fluff. 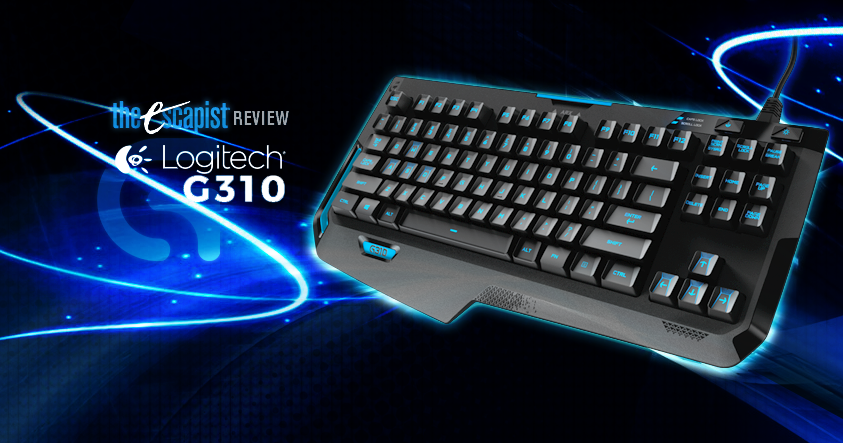 The removal of the numpad, however, is a pretty significant change. From a pure gaming standpoint it shouldn't really make a difference - after all, how many times do you use the numpad while gaming? - but does become annoying for all the times you use your keyboard outside of games.

But for these disadvantages, the portability of the G310 is second-to-none. It is small, sturdy, and light - easily able to be slipped into a backpack and taken whenever need be. If you're looking to reduce clutter on your desk, it could also serve a viable replacement for whatever current keyboard you're using.

As for precision... well, Logitech boasts that it can register key presses "25% faster than its competitors", but honestly, I didn't, and you probably won't, notice the difference from whatever keyboard you're using right now. On top of this, I ran into a problem with the keyboard early on, where occasionally a key would "stick", and give me a long, repeated press of a single key. It appeared to be a software, rather than hardware fault, and after a few hours tinkering around with various driver updates and keyboard settings, I was able to correct it by turning down my keyboard's default "Repeat Delay" option.

Software always seems to be something peripheral makers like Logitech and Razer struggle with. It seems that every mouse or keyboard or headset released these days comes with a companion program that the maker expects you to run at all times in order to get the most of your hardware. The G310 is no different, requiring the Logitech Gaming Software to make use of its features.

Unfortunately, the Gaming Software's exclusive features are fairly slim. Lacking the ability to customize LEDs, the only thing it actually allows you to do is change the overall brightness of the keyboard, and choose which keys are "turned off" when the it is switched to "gaming mode". It also allows you to hook up a smartphone via the "Arx Control" smartphone app, acting as a "second screen" to show a myriad of gimmicky information such as PC temperatures. It's a shame that such a touted feature (the keyboard even comes with a special "Arx Dock" smartphone holder) is so lame, and I turned it off (and uninstalled the Logitech Gaming Software) almost immediately.

Bottom Line: Gimmicks and software issues aside, the keyboard does exactly what it advertises: provides a mechanical keyboard solution for those who prefer smaller, more portable keyboards.

Recommendation: While it is a great little keyboard, with a hefty RRP of $180 - the exact same RRP of the G910 - it isn't really feasible to buy this guy over his big brother, unless you happen to be absolutely desperate for something smaller.