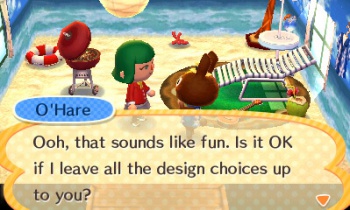 Some of the new material stands out. About midway through the game, the player unlocks the Happy Home Network: a computer that allows the player to upload their designs to the internet, and visit other players' designs. Once there, players can rate these designs on a scale from 1 to 3 as Cute, Cool, Unique, and "I'd like to live there." Getting to visit others' designs is actually very fascinating, and provides a great way to spend time outside of the enjoyable, if slightly monotonous, design day-night cycle that makes up the central mechanic in Happy Home Designer.

Likewise, there is an Amiibo Phone, which lets players visit and design unique villagers' homes as long as they have the Amiibo card corresponding to that villager. These special Amiibo card villagers can't be found in-game, so the only way to get access to their material is through the Amiibo reader on the New 3DS and New 3DS XL, or by buying an Amiibo reading peripheral for the older 3DS and 3DS XL models.

However, with the exception of the online and Amiibo features, most of the new material doesn't really feel as polished. When players have the option to pick out clients' lots, they're shown a map that's divided into several grids. The map itself appears to be of a single town, but once a lot is selected and should be used up, it isn't. Two subsequent clients be given the same lot without any consequences. I can understand having multiple lots on the map appear identical, but having the same geographical lot available to an infinite number of clients just feels weird. As though each lot is its own personal pocket dimension, where spacetime has no significance.

Likewise, clients can only be visited through menus by car. The town's facilities can be visited on-foot, but there are no villagers' homes near the offices of Nook's Homes. This contributes to the feeling of uncanniness, in which all of the villagers' homes are locked away, beyond the reach of earthly travelers. 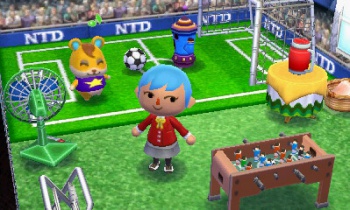 In addition the subtraction of the world map from former Animal Crossing titles, Happy Home Designer likewise removes bells, shops, the museum, and villagers' discussion topics are pared down to the barest minimum of personality beats. There hasn't been a game with Animal Crossing in the title that has ever lacked these. Without it, even if Happy Home Designer was built to be designer-minded, the game feels half-done. Instead of being a happy-go-lucky villager, the player-designer is instead an unpaid slave to the Nook's Home office. The only person in the entire building that seems to ever take clients, do work, and has to use their personal Play Coins to unlock furniture and game features is you. Many of these unlockables are objects one might think Nook would have paid for himself to run the office, but instead he offloads the cost onto the already unpaid employees.[1]

The actual design elements are excellent, and the Happy Home Network is far more social, friendly, and accessible than almost any other online feature in Nintendo's history. Further, unlike the slow, real-time clock attached to other Animal Crossing games, Happy Home Designer's quick one-job-a-day turnover is actually a really good fit for handheld gamers' daily commutes, and occasional stints in waiting rooms. However, when you get down into it, the parts of the game feel disconnected. As a result, a lot of Happy Home Designer feels like it takes place behind those sleek, beautiful, lovely glass panels. Beyond the invisible barrier, there should be a more robust game, but there isn't. Although there isn't anything expressly wrong with Happy Home Designer, it doesn't feel as full as other Animal Crossing games. It could at least use more of New Leaf's mechanics, since it's stealing New Leaf's game assets anyways.

Bottom Line: Although it doesn't feel as full as New Leaf, Happy Home Designer is a fine game that should've aspired to more.

Recommendation: Given how instanced and distant it all feels, it feels more like an expansion pack to New Leaf rather than a full price game. However, fans of furniture and home design in Animal Crossing will find it worth the cost.