Zombies are in - there's no way around it.

The Escapists: The Walking Dead embraces the jailbreaking tomfoolery of The Escapists while bringing the world's love affair with the hypothetical zombie apocalypse to unlife. Assuming the role of heroic cop Rick Grimes, you can craft, brawl, and puzzle-solve your way through five unique areas. While the game bolsters many similarities to its predecessor, you are now avoiding a horde of undead cannibals instead of escaping from prison.

The first level is a tutorial hand-holder, as you awake in a hospital after suffering from a gunshot wound. The level quickly shows how easily you'll die if you get too close to a large group of zombies, seamlessly highlighting the danger of your new enemy. After the tutorial you learn that at the core of the game's undead heart lies many of the typical The Escapists mechanics. The shelter includes exercise machines and books to help your character increase speed, strength, and intelligence, which allows you to run faster, suffer less damage per hit, and craft more items - all necessary to progress during the game. Crafting is particularly necessary for advancement, and continues the frustrating trend, established by its predecessor, of assuming that you know what to combine in order to make items that you don't even know you need yet. There are no concerns for this game handing you the answer - and for gamers who enjoy a semi-frustrating challenge, this is the perfect brain-bender. 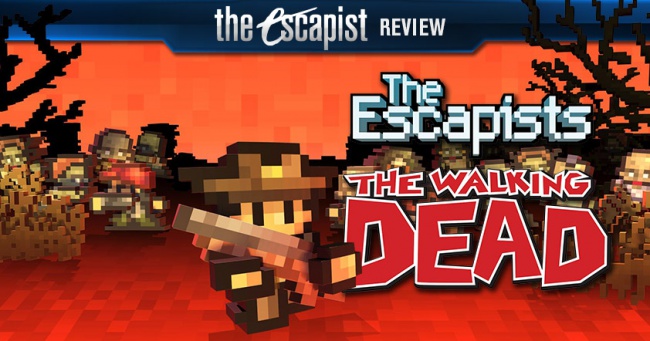 In order to keep your living area safe you will perform a number of rituals, including morning and evening head counts, chores, and meal times. Skipping one activity typically doesn't result in any serious consequences, but frequently doing so increases the risk of attack. A "zombie percentage" increases when you break routine, and lowers when you perform your duties. In your free time, you can scavenge, and keeping up with the routine helps to maintain morale, which translates to better company while scavenging. Stronger company allows you to go further, discover better loot, and unlock useful items for crafting better gear. Certain items can be difficult to locate, however vendors venture out in the night and often will conveniently be peddling exactly what you are looking for. The items are paid for with money that you earn from a variety of simple mini-quests, and is simple to earn.

The Escapists: The Walking Dead seems to discourage combat with the bulky movements, with speed being the most effective method of attack - the best offense is a strong defense is the unofficial mantra of the game. Speed will be your best friend as a player, and doing what is necessary to increase your speed, intelligence, and strength every day gets a bit repetitive. I'd like to the game implement a more combat-friendly approach for the not-so-passive players.

The overall tone of The Escapists: The Walking Dead sets it apart from other zombie titles with its one-two punch of adorable pixel art and lighthearted music. I would not hesitate to call it "charming." The charm extends to deaths as well - instead of a gory and over-exaggerated demise, your character passes out, waking up the next morning in his bed with an increased level of threat, but not too much else lost. There is a significant amount of substance offered on the surface, but after some time it becomes apparent that there's minimal tension to the game, with the emergent story rarely giving much more than "Well, that didn't work." Even for all of the game's charm, there's a lot of downtime in between the spurts of built momentum.

The Escapists: The Walking Dead is a delightful combination of nostalgic design and fresh features, utilizing some of the best parts of its legacy title while adding just enough to establish itself as a new and unique title. It's an addictive time and resource management game that can make the hours seem as though they are flying by, while still demanding enough patience to find the right combination of items to find your way through the game. However, it is not without its faults.

The gameplay can feel repetitive, and the story is more stale than I would hope for from something waving the Walking Dead flag. For all its charm, there's a level of frustrating precision and unforgiving requirements that will make The Escapists: The Walking Dead the perfect game for some people, and a chore for others. The game is fresh and mentally stimulating, and it isn't afraid of being challenging. If you liked the original, are a fan of zombies, and don't mind a game that can be a touch vague and often repetitious, then it would be worth your time to test your patience on this one.

Bottom Line: The Escapists: The Walking Dead is a clever puzzle game that brilliantly utilizes its strengths - but the strengths aren't powerful enough to outweigh some of the game's flaws.

Recommendation: The Escapists: The Walking Dead is a must-have for the patient gamer who wants a challenging puzzle and has the ability to repeat tasks without getting frustrated.