For Platinum Games fans, Devastation gives off the same worrisome vibes as last year's mediocre Legend of Korra game - it's a licensed game based off a popular cartoon series, is also published by Activision, and sells for less than the standard $60 price tag.

Fortunately, fans can cast that skepticism aside because Transformers Devastation is an exceedingly solid action/brawler that stands out as one of the best Transformers games to date. Devastation has its share of questionable design decisions, and I'd hesitate to put on the same level as Platinum's best, but the game is a ton of fun while it lasts, even if that isn't all that long.

Devastation is a welcome return to the roots of the Transformers franchise, with both a graphical style and story that will evoke memories of the 80s Saturday morning cartoons. The story is simple and predictable, but presented well enough to make it an enjoyable ride nonetheless. What starts out as a mysterious invasion of a city by Insecticons quickly becomes the usual battle of Autobots vs Decepticons as Optimus and his team try to stop Megatron from gaining control of a powerful device that will turn earth into a new Cybertron.

Again, it all feels very Saturday morning cartoony, a feeling that is compounded by the fact that nearly all of the original voice cast of the 80s cartoon reprise their roles. 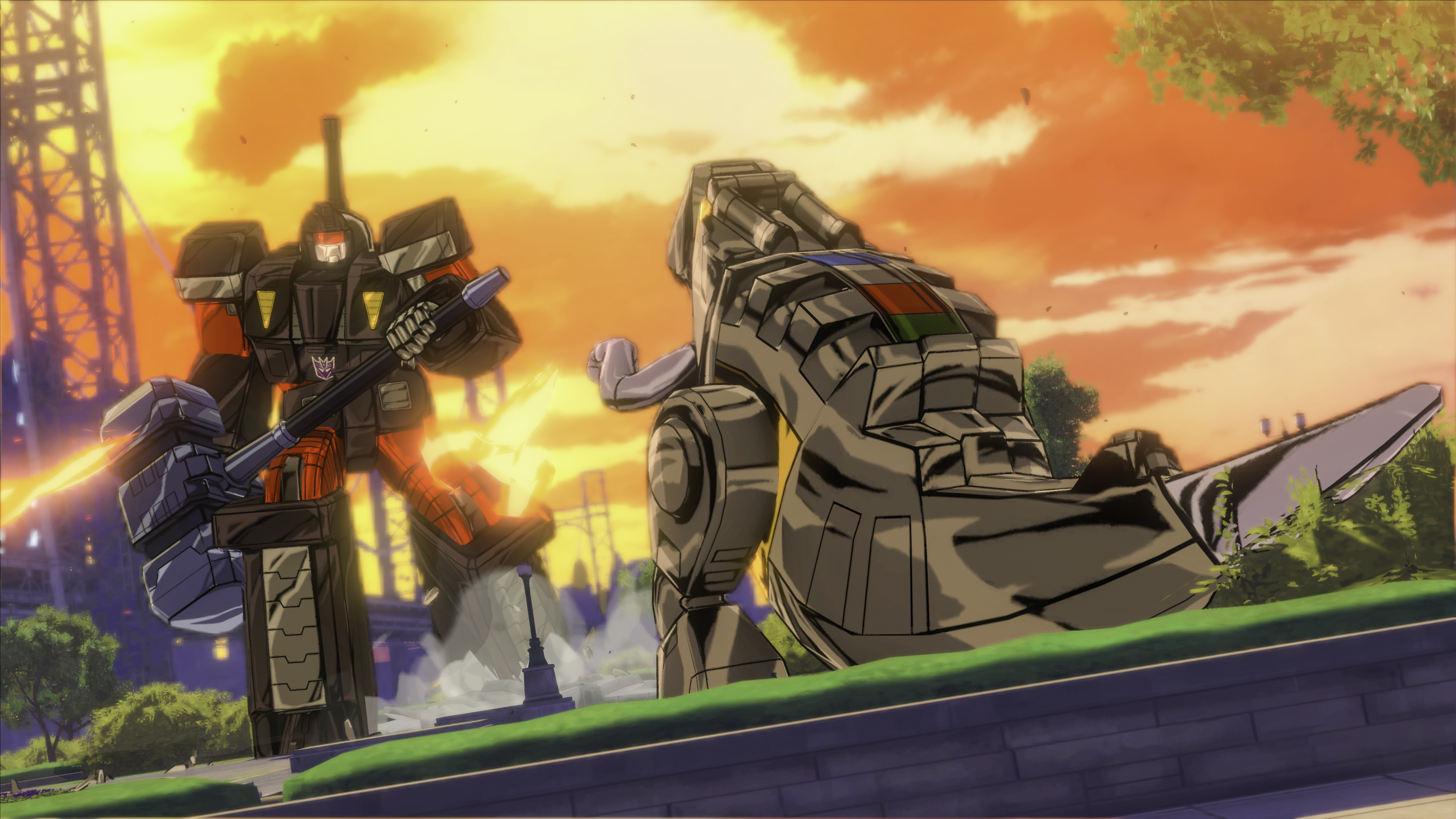 On the gameplay side, this is a Platinum Game through and through. The action is fast, flashy, challenging, and utilizes several gameplay mechanics that are directly ripped out of previous Platinum Games titles. Witch Time for instance, a mechanic introduced in Bayonetta that rewards players who dodge an attack at the last second with a brief moment of slow motion, is one of the core components of the combat system in Devastation.

In fact, the best way to describe Devastation's combat in a nutshell is by calling it a combination of Bayonetta and Metal Gear Rising, mixed in with some crazy car transformation combat that is only possible with a franchise like Transformers. Just like how Bayonetta would punctuate her combos with a powerful Wicked Weave ability, characters in Devastation are able to punctuate their combos with a Vehicle Attack that causes them to transform into their vehicle form and hurl themselves at an enemy for big damage.

Vehicle attacks are a crucial part of the combat in Devastation, and they're a smart way of rewarding players for being deliberate with their combo inputs, rather than just mashing buttons. You have only a second or so to press the right bumper at the conclusion of a combo to use the vehicle attack, and if you're just mashing buttons mindlessly, chances are you're going to miss the window of opportunity.