Hearts of Stone is CD Projekt Red's first paid expansion for The Witcher 3. Except, it isn't really an "expansion". In gaming, the word expansion conjures up images of huge packs of additional content, that often drastically changes the playstyle, or bring with it an entirely new experience. I think of Heart of the Swarm for Starcraft II, or Throne of Bhaal for Baldur's Gate. Hearts of Stone on the other hand, is best compared to the DLC "episodes" of games like Fallout 3 and Borderlands - a short, self-contained adventure that simply takes place within the original game's world. But please do not take this semantics discussion as a negative, for Hearts of Stone, despite not really being an expansion, is most definitely worth the price of admission.

For a quick, what-are-you-getting-for-your-money summary: Hearts of Stone adds a single, large main quest that will take you eight to ten hours to blow through. It also adds an assortment of side-quests and treasure hunts that will pad the total play time out to around twelve or thirteen hours. In the process of completing said quests, you'll unlock a new craftsman: the Runesmith, and a new love interest: Shani. There are also heaps of new items and weapons (that still aren't as good as Witcher gear), but no new potions/oils/bombs, and no new abilities (aside from the special runeword abilities). Some welcome quality-of-life changes, such as the ability to hotkey four consumable items (up from two) have also been added. 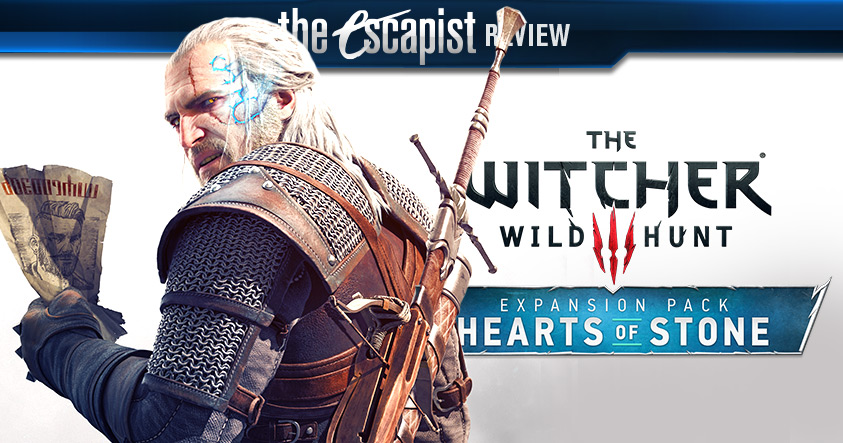 The main new story quest of the expansion revolves around a bandit leader known as Olgeird von Elric, and his "deal-with-the-devil"-type situation with Gaunter O'Dimm, whom you may remember as the enigmatic character that helped Geralt find Yennefer all the way back in White Orchard. As you would suspect from CD Projekt Red, the writing is absolutely top-notch, with O'Dimm in particular being one of the best-written characters I have ever seen in a video game. Despite Geralt's encyclopedic knowledge of men and monsters, O'Dimm remains outside of his realm of understanding, and that, my friends, is incredibly unnerving. It's the first time I faced a truly unknown entity, and despite O'Dimm acting as my ally, I just knew that he could never be trusted.

Olgeird's character does however fall a bit flat at times - especially in his over-the-top introductory sequence that doesn't really do a great job of roping you into his story. He did become more interesting as the story progressed, but in the end he just felt like Whoreson Junior version 2. His, err, "well-spirited" brother, on the other hand, is one of the highlights of the entire story.

The other new character you'll be spending a lot of time with is Shani, whom dedicated Witcher fans may remember as the Oxenfurt medic from the very first game. Being a woman, she is of course a love interest for Geralt. While her character is superb, and the interplay and flirting between her and Geralt is really natural, for anyone who has finished the game's main storyline and ended up with either Yennefer or Triss, Shani's relationship doesn't feel quite as significant. It's all sort of out-of-place... and herein lies the second problem of the use of the word "expansion".

Hearts of Stone doesn't feel like an expansion of The Wild Hunt's story - it feels like a completely separate adventure for Geralt. Again, this isn't a bad thing, but it doesn't really fit in anywhere with all the stuff going on in The Witcher 3. It kind of exists within it's own little bubble, despite taking place in existing areas of The Witcher 3's world - Oxenfurt and northern Velen. I feel like even CD Projekt Red knew this, and as such have added an option to play the expansion "standalone", in which you are given a fresh level 32 Geralt with appropriate equipment, and only have Hearts of Stone quests and sidequests available to complete. Indeed, Hearts of Stone's Geralt feels like he is from a different time than his Wild Hunt counterpart.

As a quick aside, if you don't decide to go for the standalone option and want to use your existing save, you'll want to make sure you are close to level 32 with a decent set of gear. The new monsters, and enemies, while mostly being variations on existing ones, were quite a challenge on the "Blood and Broken Bones" difficulty level. The first "boss" that I fought fairly early on in the expansion thoroughly kicked my ass, especially as I was used to steamrolling through everything in the main quest. I feel like Hearts of Stone was made in part for all of those min-maxing Witcher 3 players who were looking for a chance to try out all of the high-level mastercrafted gear they have collected.

The Runesmith should also help out said min-maxers, but be warned, you'll want to have stockpiled a crapload of gold to take advantage of him. Just unlocking his services will set you back 5000 gold, with two additional upgrades at 10000 and 15000 gold required to get the best enchants available. It is quite worth it though, as the runeword upgrades he can apply to your swords and armor are unique, and very, very powerful. For example, there is an armor runeword that will automatically give you a free Quen shield when you enter battle, and a sword runeword that makes grindstone upgrades last forever. They are cool little tweaks to existing abilities and mechanics that will really enhance your playstyle of choice.

Bottom Line: Hearts of Stone, despite not really adding that much new "stuff", tells an amazing, engaging story that is worthy of the $10 price tag. While The Wild Hunt was the conclusion to an epic, climactic saga, Hearts of Stone is simply another story in the life of Witcher Geralt.

Recommendation: If you're looking for an expansion of The Wild Hunt, you won't find it here, but if you are just looking for another bite of CD Projekt Red's incredible world-building and character development, then Hearts of Stone is for you.