Once upon a time, action films were about burly American heroes fighting back waves of enemies using machine guns, grenades, and grit. It was a very silly, oversaturated genre to be sure - but by God was it fun to watch its excessive ridiculousness unfold. Thankfully, Free Lives took that essence, distilled it into its purest form, and unleashed it as a parody video game called Broforce that excels at almost every level. And now that it's finally left Early Access, we can agree on one thing - playing Broforce is way more fun than going to the movies. 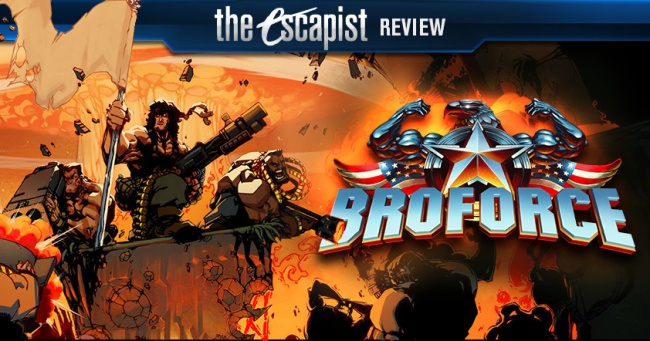 Broforce takes place in an action-movie universe where terrorists, aliens, and Satan threaten the interests of freedom-loving countries worldwide. Only one obstacle stands in their way - Broforce, the under-funded yet over-powered paramilitary group that solves every problem with excessive force. Travelling from Vietnam to Iraqistan, these American heroes fight evil, rescue hostages, and annihilate everything in their path with advanced weaponry, escaping on helicopters as the enemy base detonates behind them.

Please note: That last sentence is a literal description of almost every Broforce level. And it's as amazing as it sounds.

At first glance, Broforce's gameplay bears a resemblance to platformers like Contra, where uber-macho heroes fight to save the world from terrorists. Players proceed through jungles, caves, corrupt cities, and other terrorist bases and attempt to wipe out the evil within them. But Broforce goes a step further by directly parodying its action-movie source material and cranking up the violence to an extreme limit.

First of all, you have a huge range of parody characters at your disposal, each lifted from recognizable action films. There's Rambro, Bro Hard, Bromando, Brobocop, and more. New Bros are unlocked as you rescue in-game hostages, each one bringing a new weapon and grenade type to the table. Ash Broilliams carries a Boomstick shotgun and chainsaw. Bro Dredd fires homing rounds and launches guided missiles. The Bro in Black wields the explosive Noisy Cricket and activates a Neuralyzer that leaves enemies stunned. Cherry Broling fires machine gun ammo and explosive rounds from her leg. And Broheart lets loose his Freedom cry, which sends enemies fleeing in terror. There's no shortage of combinations to work with - or applications when destroying enemies.

Then you have destructible environments, which Broforce relishes like few other games can. Almost every single surface can be destroyed, whether from gunfire or area damage of explosions. Destroying everything around you has some strategic value, such as carving underground paths to get around challenging enemies. But more often than not, you'll be setting off complex chain reactions, taking advantage of explosive barrels and gasoline tanks to devastate huge portions of the map with just a nudge on your part. The twist is you can't really be an outside observer of the devastation - you're always in the thick of it. Trying to keep your distance from explosions doesn't mean the chain reaction can't reach you, forcing you to keep moving while praying you'll emerge unscathed.

This destructive process makes Broforce one of the few games where it's just as exciting to fail as to succeed. Watching the chaos spin out of control is a huge part of the appeal, and if you don't survive it will still bring a smile. Throw in co-operative play and the disasters become even more ridiculous. Imagine rushing through the jungle with four players, accidentally triggering every explosion in your path, barely dodging enemy blasts. Then you stand below the escape chopper... only to see a gasoline tank you shot earlier fling into the air and blow it from the sky. Causing it to land directly on your heads. In most games, that would lead to a moan of frustration before reloading. In Broforce, it feels like you unlocked an achievement.

That's not to say Broforce is without frustration. Between high enemy numbers, spinning chainsaw blades, and one-hit kills, you'll likely lose a few bros in the time it takes to spell "acceptable losses". What's worse, you can't choose which Bro you play as each level - which means you might get a useless weapon/grenade combo for the obstacle you're currently facing. And while local multiplayer is a blast, it's no less confusing, especially if you lose track of which bro you're controlling on-screen. Watching elaborate deaths unfold is only fun when you can tell what's happening after all.

That said, the frustration is mitigated with short levels and reload times, giving you fresh opportunities to blast through enemies. Meanwhile, the lack of player choice means you might find a useful ability you hadn't previously thought of. (MacBrover might not be my favorite character, but his plantable TNT sticks pulled me out of more than one jam.) And of course, once you finally grab the chopper ladder and escape a punishing level, you'll feel an immense level of satisfaction usually reserved for getting married or graduating from college.

And I've barely scratched the surface of Broforce's appealing elements. Level design is top-notch, balancing random chaos with edge-of-your-seat action strategy. Enemy types are varied and charming, from your standard terrorist thug, to chain-gun heavies, to attack dogs. And just when your standard Vietnam environments are getting old, Free Lives mixes up the formula. Crime-filled cities, Alien-infested hives, and the grisly underworld of Hell await you, each with unique enemies and new game mechanics.

I have played through Broforce multiple times in Early Access. I played it again for this review. Each time was an absolute joy, whether in single-player or co-op. Broforce was already a benchmark for Early Access gaming, and it's even better in its finished state.

Play this game. Play it for America.

Bottom Line: Broforce is a silly, but sincere love letter to iconic action movies, refined to perfection with rich environments and wonderfully-crafted enemies. Even when you're killed by an out-of-control explosion which you triggered, you'll be having an absolute blast with this game.