Animal Gods is a comfortable action-adventure platformer that's a bit like The Legend of Zelda with a hint of Ico's art. A young girl named Thistle must free the three animal gods in a distant land called Sky Mirror - she's on a religious pilgrimage of sorts. It's a Kickstarted game too, as I came to realize in the graveyard section of the game ("D. Wood" promised to "conquer the beast single-handedly" according to one epitaph). 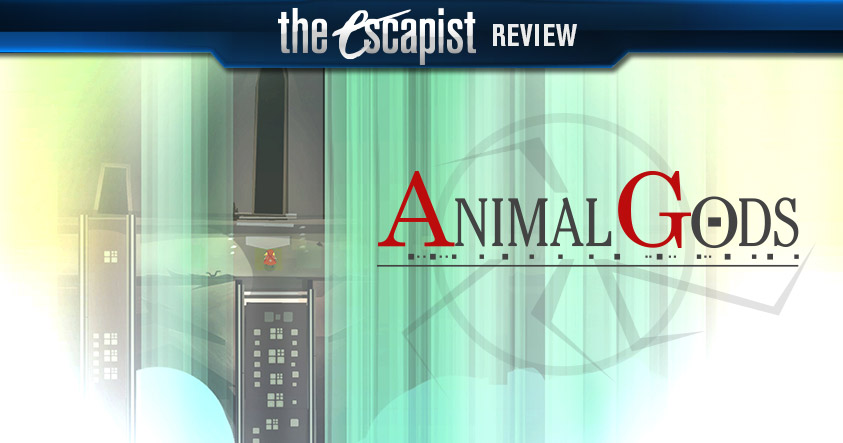 The sights and sounds of Animal Gods are relaxing to the point of meditation at times. The abstract art style of the landscape is a beautiful place to explore. The trees are clusters of green circles and ovals, the buildings and platforms are a careful assortment of rectangles of varied lengths and heights. Deep in the caves, there's dark red hues and brown smog polluting the air. Thistle's hair when viewed up close during dialogue is a series of goldenrod triangles. The variety of songs in the levels of Animal Gods are a symphony of New Age synthetic ambiance that's worth buying separately as a soundtrack, if you're into that sort of thing. 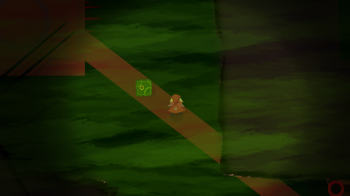 You'll need the calming music and visual stimulation to balance out the frustrating platforming. For example, in the Gardens of Gwyn dungeon, the protagonist has to use a dash ability to traverse moving platforms and walls of poison water. The default dash button is the spacebar. The difference between pressing the "dash" button and holding "dash" button down is tricky. This is something you'll do a lot, and it seemed to not be part of what the game intended in its challenge. Thankfully, there's plenty of glowing circles on your journey that serve as checkpoints you'll revisit every time you die.

When Thistle goes to the Coast of Syn, she gets a bow. By clicking down the right mouse button, you shoot a projectile that launches straightforward from where Thistle is facing. The main challenge in this section is dodging orange "crate" enemies and killing the pink and blue husks in every area to advance. While I would have enjoyed a more complex bow and arrow mechanic in this part of the game, the game developers behind Animal Gods constructed creative puzzles and obstacles with a simple mechanic. Later, a supercharged bow made the second set of challenges easy to annihilate with some precise shooting.

The Halls of Enyd, home of the snake god, grant Thistle a sword. Much in the same way as The Legend of Zelda, using your sword to kill everything is the key to victory here. The downside is that unlike the master sword Link uses, Thistle is confined to a short stub of steel for her weapon, and Thistle has to get up really close to enemy husks to do damage. The supercharged sword, later on, gives you the swinging abilities you'd expect from a video game sword.

The abstract landscape is filled with implicit hints as a guide of where to plan your dash from, to time your bow strikes amongst the rhythm of the crates and husks and picking the right place to swing your sword. Once you master those keys, the game isn't much of a challenge. Everything in the game is beatable if you remember to be patient and calm. The more you rage at the game, the more you'll fail.

Background story is told through diary entries the main character finds scattered in different platforming levels. A girl named Juliette found her way into the same world that Thistle is in. Her writing provides the emotional thought process and a sense of character development that Thistle lacks. I won't spoil the plot too much, as it's something that's meant to be seen for yourself, but the arc and conclusion were satisfying.

There's no graphics options menu, nor a sound options menu in-game, though I was prompted to choose my resolution and what monitor I wanted to play the game on as soon as I started it. Nothing is available to tweak, and there are no button maps to customize. I often wished there was a way to speed up text crawl from the sluggish default pace.

Animal Gods is an art platformer game that's impressive to look at, like a museum of different pieces all arranged together. There's enough challenge in the gameplay to string you along as you're exploring this colorful world. The tranquility of the sounds might be peppered with the occasional cursing at your screen for making a simple mistake. I beat it in about a day - not constantly playing it but going back periodically during multitasking to finish it. You can play a new game plus mode that gives you nine lives per dungeon.

Bottom Line: Easy on the eyes and the ears, this game is fun to see and listen to. It could have had more gameplay content though - the journey just ended too soon.

Recommendation: If you're into relaxing games you can appreciate for their visuals, Animal Gods is right up your alley.