When my first multiplayer match started at 2 PM, I didn't think I'd be playing for very long. Then, I saw 2 AM had arrived. The heat of the competition in Secret Ponchos is easy to get swept away in. After playing this game, I can see the establishment of an action packed PvP online indie MOBA that can stand a chance against the AAA franchises.

Secret Ponchos by Switchblade Monkeys Entertainment is a competitive multiplayer western top-down shoot-em-up. There's a singleplayer arcade mode, but the real game is found in the multiplayer battles. You create a custom outlaw character that gains "bounty" (experience points) by participating in a variety of multiplayer games. Alongside that, every outlaw gets a set amount of perk points to enhance their stats. You can give your outlaw a more punishing damage boost, make them quick on their feet with higher speed, boost their weapon fire rate, or go for health and stamina regeneration upgrades. These stats can be added to and subtracted from at any time, so they aren't a permanent choice. The only limitations you'll really face are the game's occasional crashes. 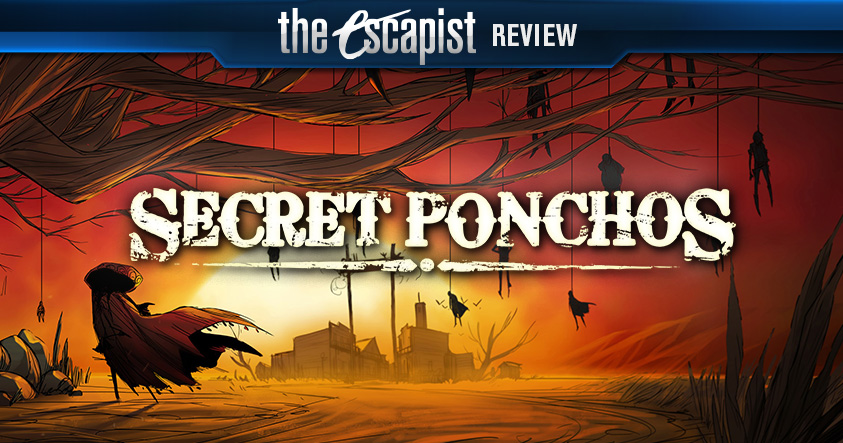 I'm not the best at competitive multiplayer games, but thankfully there is a tutorial available for people to get their bearings on everything. They go through all the controls necessary for the shooting mechanics, holding down the right mouse button to aim, clicking left to shoot. They point out important caveats such as your character's stamina only restoring if you stand still. In a multiplayer shooter game like Secret Ponchos you're going to be slamming down on WSAD movement keys as much as possible. When you take cover in Secret Ponchos, your character turns invisible and can't be seen unless other people come directly behind the cover themselves - it's meant to simulate what the perspective would be like from a ground level view. Additionally in cover, you reload ammo much faster.

The three types of game modes in multiplayer are Deathmatch, Domination, and Posse Leader. Deathmatch is the classic best of three matches style of game where you don't respawn until the end of a round. Domination is a bloody battle where you need to achieve a five kill lead against the other team. If you die during a Domination match you respawn, but the enemy gains more of a point lead against you. "Posse Leader" mode is a three on three match where one of your teammates or yourself is assigned the leader position and your allies have to protect you from the other side.

For the lone wolf type, Secret Ponchos has a one player arcade mode. The objective is to beat six randomly arranged A.I. controlled characters in a gauntlet of one on one dueling. I considered it a decent challenge that helped hone my gun skills for multiplayer, although the enemy A.I. occasionally got caught walking in place behind objects and had disappointing technical hiccups. Despite the bugs, arcade mode is a great chance to tour the different maps and get an idea of their layout before diving into multiplayer, but it's not worth buying the game for in and of itself.

Locations in Secret Ponchos provide the backdrops of the game's western deathmatches and battles. At launch, there are eight different arena battlegrounds: Boneyard, Plaza, Ranch, Saloon, Trainwreck, Mines, Trainyard, and Fort. Wooden boxes, gravestones, and other environment items in the maps are destructible. An impressive touch that added a sense of power to this cartoony western experience.

There are ten diverse characters in the cast of Secret Ponchos. They each emulate and reflect a western archetype and come equipped with their own fighting style and stat variation. From the mysterious "Phantom Poncho" equipped with a shotgun and trusty bullwhip, alongside the monstrous "Gordo" bandit character who unleashes a gatling gun and molotov cocktail concoction, to the agile "Matador" with her banderillas, cape and sword. My character choice was Gordo, as his gatling gun seemed to inflict the most amount of damage in the smallest amount of time possible. The downside that I came to realize was that Gordo is an easy target to hit with such massive size. The character models and their accompanying artwork pull off a very lively look. It's not just the standard "Good Sheriff vs. Bad Outlaw" type of game (although those characters are available) - Secret Ponchos is about an all out Wild West brawl. If you like alternative skins, you can buy them as DLC.

The soundtrack is a decent arrangement of western themed orchestral music. It's nice that the controls are fully customizable. You're free to rebind the keys for your keyboard and reassign the buttons on your controller inputs wherever necessary for you.

Graphics settings were too simple and could've been expanded upon more. The only toggleable quality option in Secret Ponchos is called "Quality". One would expect to find some sort of texture quality possible adjustments option to apply to shadows, or anti-aliasing. Computer graphics aren't really an "all-in-one" adjustable type of feature. I know games tend to provide a baseline option adjustment that does a general tweaking of different visuals, but in most cases they allow the individual components to be modified. Beyond "Quality", there's "Full Screen" and "Vsync". Overall it felt barren and empty in this area of the game settings.

There's an unfortunate bug that occurs when your character uses their stamina to activate their dodge/dive ability. On some occasions, you can dive straight into objects themselves and glitch the physical barriers of them. Another bug people are seeing in multiplayer matches is the physical map itself fails to load properly, placing the players in an invisible rendering of it where they can only see the skybox, a few scenery items, and other people's outlaw characters. (UPDATE: This "blue sky" bug has been patched)

I've enjoyed Secret Ponchos enough during my review that I might set aside time to play it for fun instead of critique. There were enough stats and loadout choices that it would easily take a month for me to explore them all deeply. For an indie multiplayer game, the foundation of entertainment this game provided made me hopeful it will catch on as a competitive game. After a few of the bugs get buffed out, the game gets optimized in the matchmaking process for multiplayer, and they add a few modes? Secret Ponchos could be a game people enjoy for a long time.

Bottom Line: This over-the-top Wild West themed MOBA has a lot of potential, even if it needs a bit more polish..

Recommendation: This game seems appealing for people who want a fresh take on a MOBA style experience.