Developed by 343 Industries and Published by Microsoft. Released on October 27, 2015. Available on Xbox One. Review code/copy provided by publisher.

It's hard to think of another AAA game developer in a less enviable position right now than 343 Industries. Not only are they expected to meet or surpass the absurdly high standards set by Bungie's Halo games, but they're also following a disastrous launch with Halo: The Master Chief Collection and a lukewarm reception to Halo 4's multiplayer from its most hardcore and dedicated fanbase. Needless to say, the pressure is on for 343 to make Halo 5: Guardians stellar.

Fortunately for Halo fans and for 343 themselves, it is. 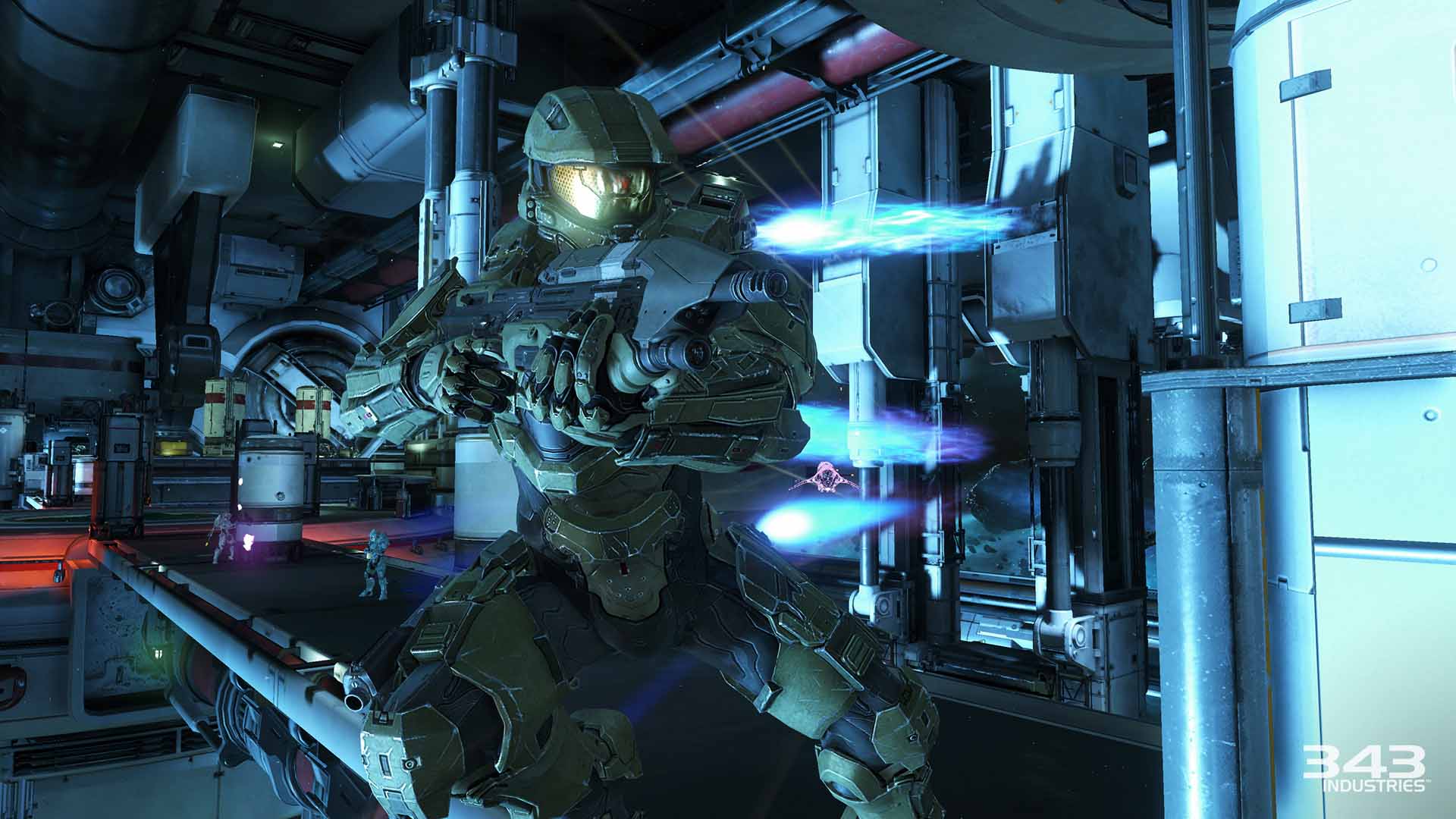 Guardians picks up eight months after the events of Halo 4, so if the terms Didact, Librarian, prometheans, forerunners, and rampancy don't ring any bells, you're going to want to get yourself to a wiki and refresh on all of the happenings of Halo 4, because Halo 5 wastes no time recapping any of this for you.

In many ways, Halo 5 models its campaign structure after Halo 2 by running two parallel stories that intersect at key moments. In addition to playing as Master Chief -- who is now traveling with his old Spartan II buddies, the members of Blue Team -- players also take control of Spartan Jameson Locke, former ONI Acquisitions Specialist and leader of Fireteam Osiris.

Halo 5's story starts off slow and doesn't get interesting until it's more than halfway done. It's hard to give an overall synopsis of the story without going into a certain key spoiler, but the general gist is that while on a routine investigation of a lost research station, Master Chief encounters something that causes him and his team to go AWOL, prompting the UNSC Infinity to send out Fireteam Osiris to retrieve the Chief before he potentially assists in bringing out about events that will spell bad news for all sentient life in the galaxy.

Just like Halo 2, Halo 5's story feels like all set-up and very little pay-off; concerned more with setting up a climactic finale for Halo 6 rather than providing a proper self-contained narrative with a satisfying conclusion. There are definitely some interesting twists along the way, and the note that Halo 5 leaves us on makes me anticipate the final chapter of the Reclaimer trilogy all the more, but taken on its own, Halo 5's story is lacking. 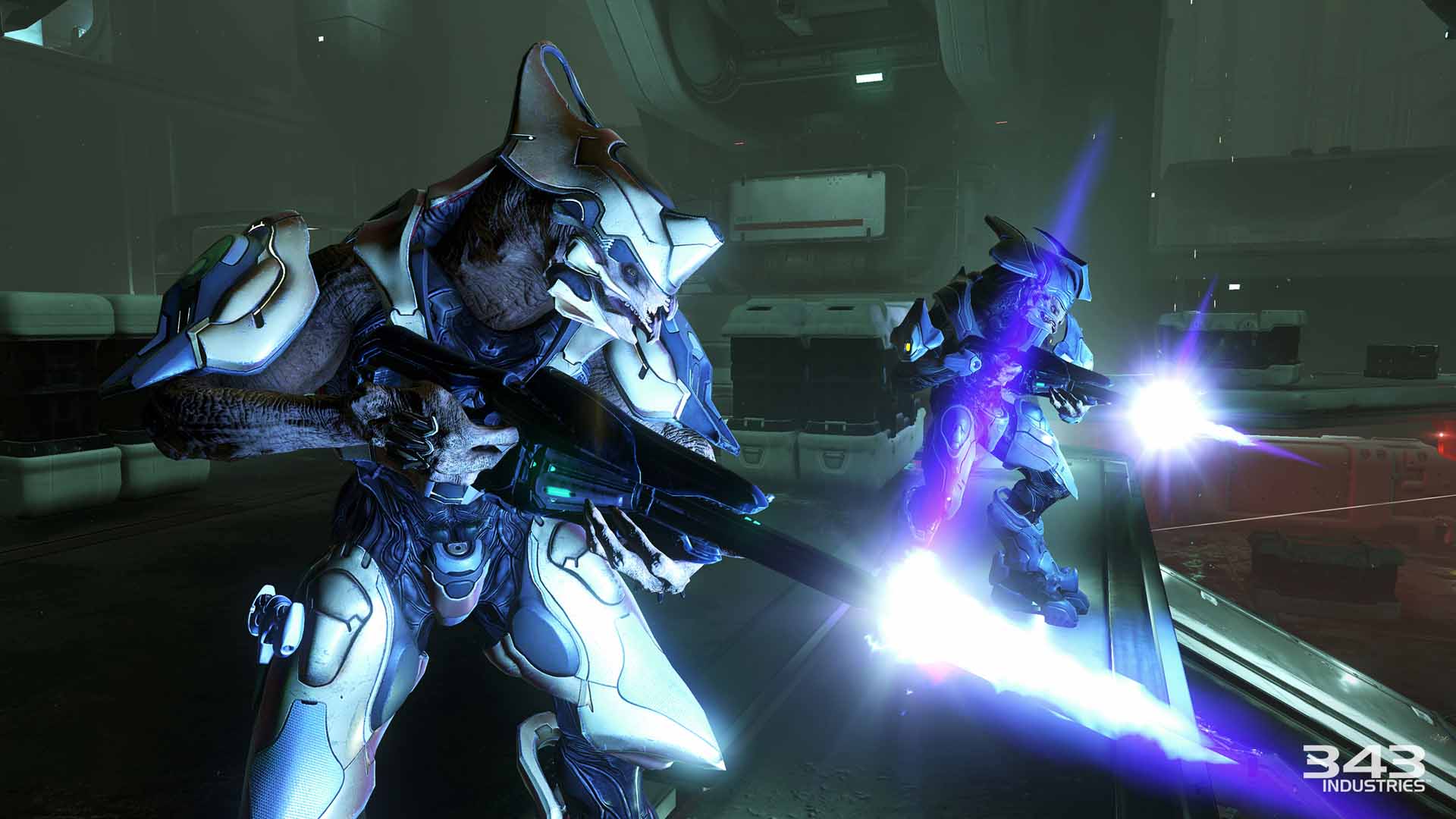 It also doesn't help we really don't get to see Master Chief all that much, despite the game's most important story beats centering around him. For 12 of the 15 missions you're in control of Locke and Fireteam Osiris as they try and catch up with Blue Team. It's fortunate that Osiris does have the more colorful and interesting characters on their team, but they're just observers in a story that isn't about them.

While the story may not be the strongest the Halo series has ever seen, the actual gameplay during the campaign is some of the best. Chief and Locke both have a host of new moves and abilities, with a few that will make you never want to play another Halo game without them. For example, you can now sprint without needing an armor power-up and aim down sight on every weapon! Hallelujah!

Purists might cry foul at the idea of implementing two common shooter mechanics that the Halo series has been fine without for so long, but 343 did a good job of making their implementation fit in well with the established set of weapons and gameplay. Aiming down sight makes mid-ranged weapons like the Assault and Storm Rifles much more satisfying to use and sprinting resets your shield recharge cooldown, making the choice to sprint a balance of risk and reward.

Halo 5 also takes a little inspiration from Titanfall and Call of Duty: Advanced Warfare by giving players an infinitely useful short range directional boost. It meshes perfectly with Halo's combat, giving players a chance to quickly get out of the way of grenade explosions, Wraith cannon blasts, and slow firing weapons like the Spartan Laser or railgun. 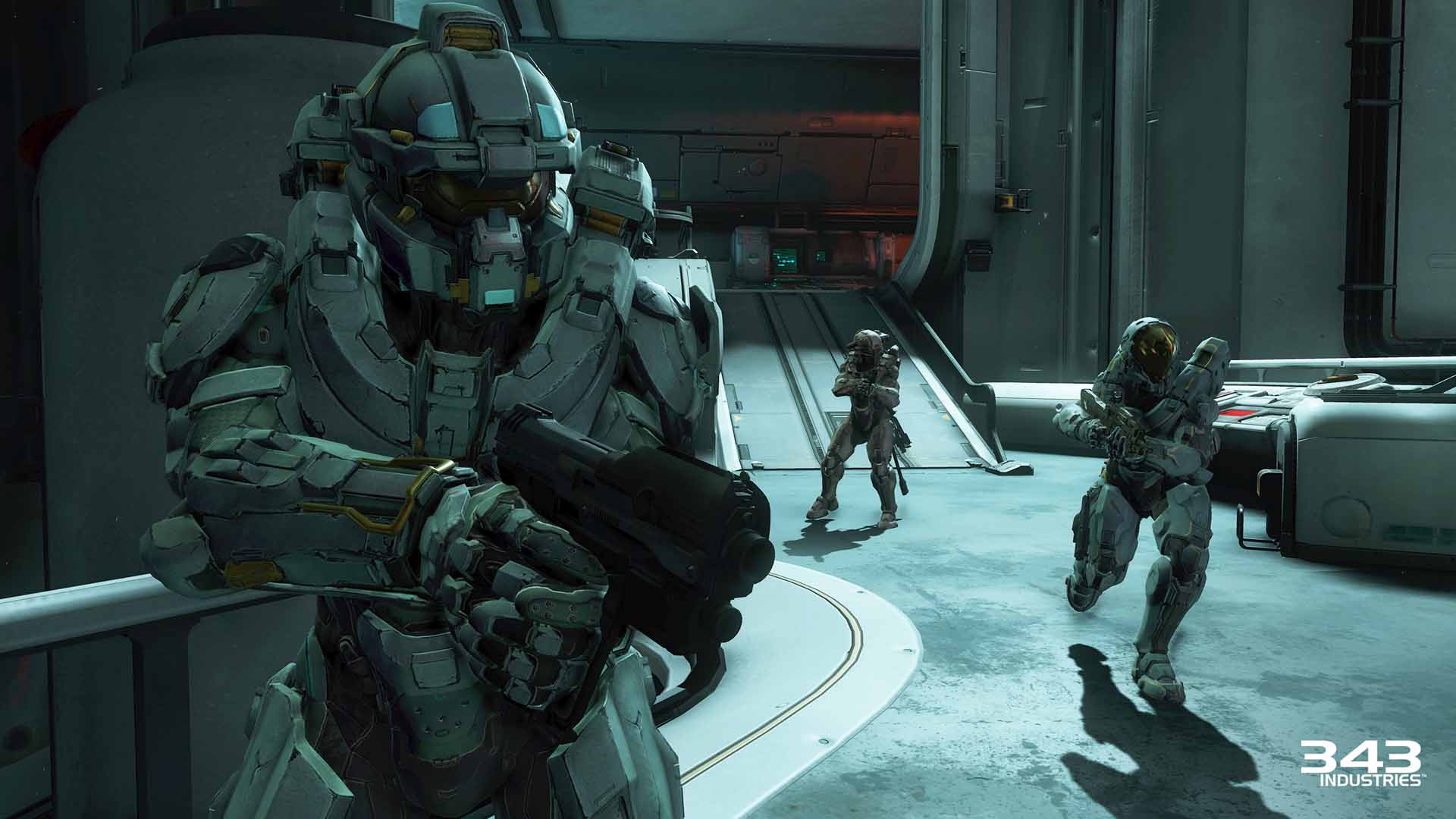 Other abilities, like the Ground Pound and the Spartan Charge, will likely see a lot less use, but are extremely satisfying when used effectively. Especially when you're able to leap from a cliff and ground pound down on a crowd of unsuspecting grunts, or charge into an elite and knock him off of a cliff.

Halo 5 marks a departure from prior games in the series by being the first to be designed from the ground up as a four player co-op experience. While all prior Halo games have had cooperative play, its integration into the story has always been an afterthought. Typically, the other players would just inexplicably drop into the game as clones of players one. This changes in Halo 5, as each player is able to control a specific member of the team, each with their own loadout and armor perk.

Unfortunately, for those who want to play Halo 5 as a single player game, the cooperative design intrudes on the single player experience. On anything lower than Legendary, the game is much easier than prior Halo games due to the fact that your AI teammates can revive you before you bleed out.. This might make you think, "Well then, I'll just play it on Legendary," but when you play the game solo on Legendary, which is what I did for my first playthrough, a whole host of other issues pop up.

First off, there's no way to give individual orders to your teammates. You can give the whole group basic contextual orders like: "go over there," "focus fire on that guy," "pick up that weapon," or "get in that vehicle," but you can't give individual orders to any of your teammates. So, for example, let's say you wanted to split up to flank an enemy who has a weak spot on its back, but don't want to send all of your teammates away and leave yourself without someone to revive you. You wouldn't be able to do that. It's all or nothing, which makes dealing with enemies that have weak spots on their backs, like Hunters, Knights, and Wardens, an absolute nightmare. Especially when you have to fight several of them at once... which happens all the time later in the game. 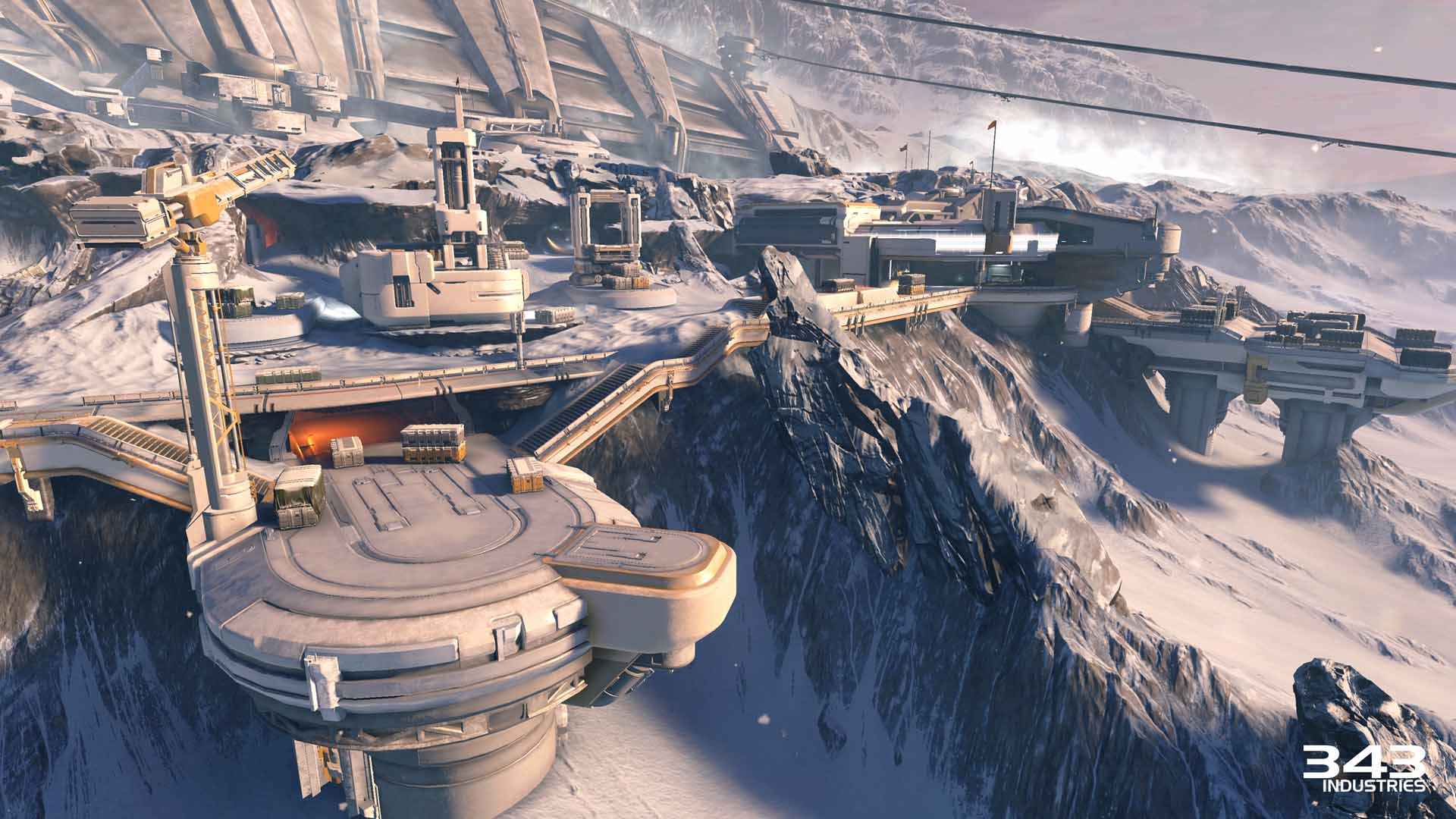 The second problem, which is a problem for every difficulty, but way more frustrating when you play on Legendary, is that the friendly AI can be awful at reviving you. I've had moments where a teammate was a mere five feet away from me, but because I was on a slightly elevated platform, he just stood there while I slowly died right before his very eyes. One time I was sniped off a ledge, fell to the floor, and all three of my allies jumped down after me, with not a single one reviving me.

If you can look past those issues, there's a lot to love about Halo 5's campaign. The music will give you goosebumps, it's got some of the best level design the series has seen, unparalleled variety in its gameplay, and a large handful of truly jaw dropping set piece moments.

The game is also gorgeous, featuring all of the beautiful sweeping panoramic vistas you're used to in the Halo universe, but with the added bonus of running at a silky smooth and consistent 60 frames per second. No matter how crazy the action got in Halo 5 -- and it got pretty crazy -- never did I notice a moment of slowdown.