This Halloween season, the last place I expected to find a scary game was from the "manhwa"-style of storytelling. But far off in the distant lands of South Korea, there's an indie gaming studio called Devespresso Games. They made a point-and-click survival horror game called The Coma.

You play as Yungho, a teen-aged student who stayed up all night studying for his exams. As Yungho rushes to school because he slept through his alarm after a cram session, he's surprised to see an ambulance and a crowd of students outside near the gates. We learn that a classmate of Yungho took his exam study session too seriously and tried to kill himself. Our hero brushes the grim and mysterious suicide attempt off and goes to take his school exams. Yungho's all-nighter causes him to fall asleep at his desk, and he wakes up in a haunted version of his school. The game itself is solving the mystery of this dark mirror world where Yungho appears. Along the way, he's stalked by a powerful succubus demon named "The Killer," a shade creature that rules over this coma vision.

Gameplay with The Coma fits the survival horror standard of making a protagonist have limited power over the world. You have a flashlight to see better in the dark, but using it will definitely draw the attention of the school's monsters to you. There's various chalkboards in the school you can save your progress at, I recommend doing that often. You have the ability to actually run away from things, as The Coma is built around the fact that Yungho needs to bolt out of an area when a succubus demon shows up. Yungho can hide in bathroom stalls, broom closets, whatever is convenient. In his hideout, Yungho can regain his stamina and health by eating food he scavenges from the Spooky School. The inventory system is manageable - one section is for consumables, the other for key items. "The Killer" shade demon is easy to outsmart and outrun, but the amount of detail depicted in their character model still managed to make me fearful. "The Killer" isn't intelligent enough to open the broom cupboard or toilet hiding spot you'll find yourself in during The Coma. But like the shock of Outlast's scary antagonists in 2013, "The Killer" still manages to jump up and surprise you when you least expect it. My jumpy heart can testify to that. The animators did a fantastic job in their production. 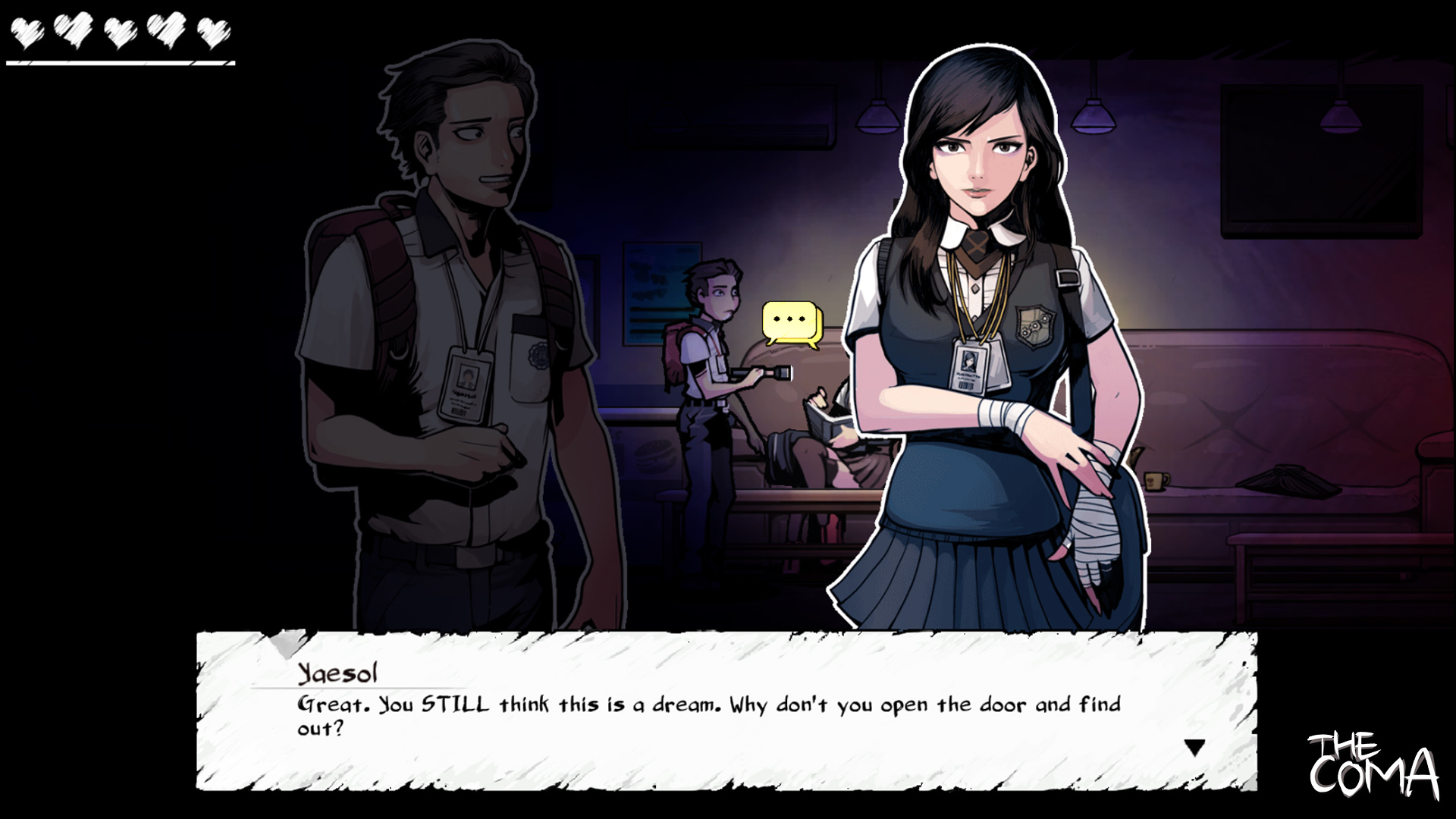 The art style most likely has inspiration from Korean stories (manhwas) and comic illustrations. The drawings definitely have their own distinct character, clearly custom made and thought out for the sole purpose of the plot. I was surprised to see these cartoon depictions be represented in-game as well as the cutscenes. This is it showed the most that The Coma didn't cut corners when it came to visuals. The developers had the option confining the hand-drawn designs to cutscenes only, if they wanted to save time. But instead, they took the time to give the whole game have this detailed 2D etched look. The school's doors, desks, hallways, and even the broom closets Yungho jumps into to hide are all fully outlined and fleshed out. The small details are not left out of this either - inventory items such as antidotes, bandages, and chocolate bars are all pictured in full at their corner of The Coma universe. To get to the point - everything in terms of the visuals in this game is done with purpose and detail. Every set piece carefully placed, every item's look, down to the last line. It was built to compliment the story the game developers wanted to tell.

Scattered throughout the Spooky School are notes and memos that fill in the backstory of The Coma universe. These bits of text shed light on the mystery of this strange reality Yungho tries to make sense of, but the game takes things a step beyond unraveling the bizarre aspects of the main story. The game also includes notes about different areas of the school in general. The anecdotes about some of the teachers and their backgrounds help make the school seem more than a backdrop for the player to run around in. Instead we're presented with an actual high school that Yungho is only a small part of. It helps create the feeling of a bigger world beyond the events that are happening to the protagonist. 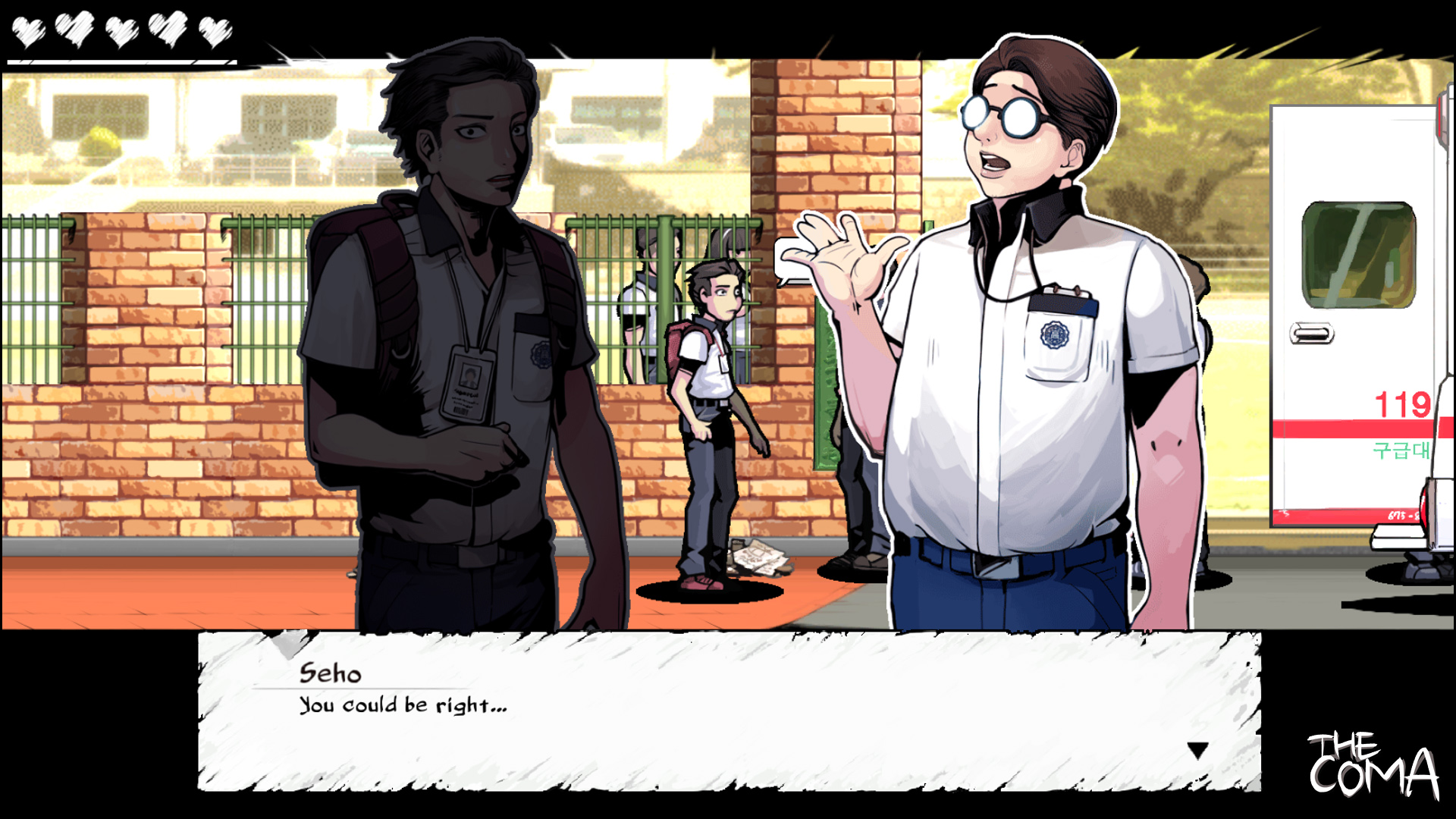 The Coma could use more video options, only allowed to choose "windowed" display or not. Audio languages have English or Korean choices available, and the choice to toggle music or sound effects. The soundtrack for the game manages to orchestrate fitting atmospheres wherever possible. My favorite moment was in the school's cafeteria - as Yungho walks along, there's a happy diddy playing in the background that you wouldn't expect for such a setting. But the further along you walk, the occasional hiccup and sour note in the room's jingle intensifies. The sense of something twisted and wrong going on in this haunted school nightmare is made incredibly clear by it.

A portion of The Coma's gameplay that could use some fixing is the sounds the monsters make. When Yungho is hiding, the clacking of the shoes the demon is wearing when it walks is audible. Unfortunately, this sound effect persists when the game is paused - which can distort the game into misleading you to believe the monster has moved on when it really has not. Given the importance to gameplay that sound effects have, I hope the game developers adjust this to make more sense to the player as soon as they can. These smaller issues seem like nitpicky remarks to make, but given how impressive The Coma turned out to be it's worth mentioning the flaws sprinkled throughout.

I was surprised that The Coma delivered on the premise it advertised in a way that was able to appeal to someone outside of its target audience demographic. I beat the game over the course of about a day, and I was left wanting more of this world as I watched the ending that set up an obvious sequel. The occasional bug or sound glitch that I encountered didn't pull me too much away from the immersive presentation. When a video game can sell you an idea that you didn't even know you wanted, it did something right. I didn't consider myself a fan of manga/anime style stories, but The Coma woke me up to the potential of solid video game experiences like this.

Recommendation: If you're a fan of manga/anime style stories and want to scratch your Halloween itch, The Coma is here to satisfy.