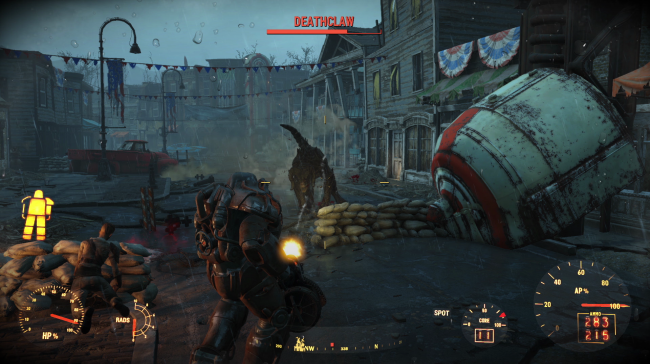 Most of the changes are a lot more fun with power armor, and the game wastes little time in providing it. As the most powerful form of protection in the wasteland, the acquisition of a suit of power armor has traditionally been a long-term goal in Fallout, often requiring considerable effort to earn. In Fallout 4, there are multiple ways to gain a set very early on, within the first couple hours of play, and it's likely that several will be available to the player by the end. While this makes having such armor feel like less of an achievement, it's no less useful.

Power armor isn't equipment that you wear from within the inventory system. It functions like a vehicle, an object that characters (including NPC companions) climb into, and it feels like one too. Movement becomes slower and heavier, but the amount of punishment a character can take while wearing it more than makes up for that issue. Wearing power armor also increases a character's carrying capacity, provides invulnerability to fall damage, and makes them a good foot taller than everybody else in the Commonwealth.

It is not without limitations. Power armor is fueled by consumable fusion cores. Without a fusion core, the frame is just an inert hunk of metal. Running out of power while traveling means having to leave it behind (though it will remain where left, and the in-game map helpfully indicates the location of the most recently used suit). Thankfully, fusion cores are common enough, found powering generators in many buildings and even available to purchase from most weapon traders if things get dire.

Other changes may be less welcome. Character progression has been dramatically streamlined, combining formerly disparate elements into a single system, represented by the Perks chart. Each experience level earned allows the player to either increase an attribute, select a new Perk from the chart,or purchase a higher rank of an already acquired Perk. Available Perks are based on the character's ratings in the seven core attributes. (Strength, Perception, Endurance, Charisma, Intelligence, Agility, and Luck; SPECIAL, for short.)

In the simplest terms, the new Perks system reduces the process of character leveling to a simple action, instead of calculating out individual point values for a range of available skills as was done in prior Fallout titles. But the choice isn't less overwhelming at the outset, seeing as the first selection comes from a list of nearly thirty options. Worse, the ability to increase attributes undermines the significance of SPECIAL as a system that defines the range and limitations of a character.

But nowhere is the push toward simplification more keenly felt than in the dialogue system. For the first time in the series the player's character is fully voiced, and that voiceover does a lot to make other voiced dialogue feel more natural. The downside is thatFallout 4 has abandoned list-based trees in conversations for the more modern "cross-style" interface, presenting four responses to any dialogue prompt. When faced with a choice, usually two will represent a binary of being polite or a jerk, a third will be either milquetoast or self-serving, and the fourth will ask for more information about the last thing said. Occasionally, these options can be a bit vague, as they consist of only a few words that could have multiple interpretations, expecting that the player will correctly guess at the intent.

Sometimes, one option will be highlighted, representing a persuasion test governed by Charisma, and some responses can affect how companion characters feel about the player, but the complexity of the dialogue seems to end there. A character with an Intelligence rating of 1 converses no less capably than at a rating of 10, and a character with 10 strength is no more intimidating to chat with than anyone else.

This is tragic. One of the defining characteristics of the Fallout series up to this point has been the importance of a character's attributes on how they see the world and how the world sees them as reflected through conversation. Distilling dialogue down to a more linear model with fewer choices - seemingly unaffected by a character's perks or abilities - completely disregards a fundamental strength of the series. It's as if in making the decision that players need not start the game again upon completion of the story, the developers decided that players would therefore no longer desire to start again at all, and put little effort into offering the kind of narrative depth which would make such a prospect appealing. 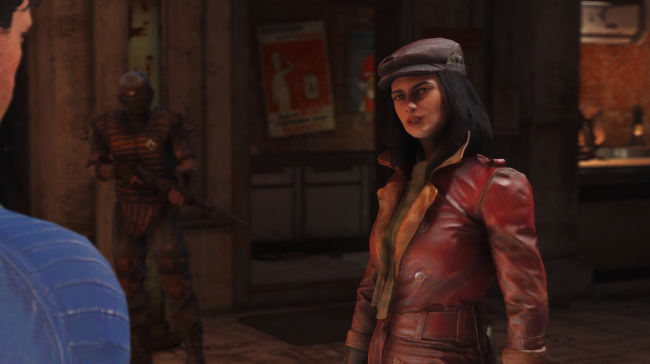 It's made worse by knowing Fallout 4 has some of the more interesting non-player characters and companions the series has had in some time. Along the way, you'll encounter a brassy journalist digging into a possible relationship between the Mayor of Diamond City (the region's largest settlement, built within Fenway Park) and the shadowy Institute, an aged and hard-boiled synth private investigator, and an idealistic soldier seeking to unify the settlements of the Commonwealth for their mutual survival, among others. By traveling with them, they provide very helpful combat and carrying assistance and will open up and talk about their personal histories.

What they won't do is shut up. Each of these characters has a couple of canned observations that they can (and will) blurt out whenever they witness you performing basically any action. Crafting something? They have something to say about it. Picking up an item off a corpse? Your companion can't resist commenting. If you could take a dump, they'd probably compliment you on the size of it. It doesn't take long to have heard every variation, but they'll repeat themselves anyway. When it comes right down to it, Dogmeat may not be able to fire a gun, but still manages to be the best companion based solely on his relative inability to pester you.