If You Build It, They Will Come

While almost every aspect of Fallout 4 seems to narrow its focus, there is one major exception in the game's crafting system. Rebuilding human society in the aftermath of nuclear annihilation has been a major component of every Fallout, but never has it been so literal. Every non-quest related item that the player can pick up can now be broken down into basic components at workshops found in settlements and elsewhere in the Commonwealth. Very few objects cannot be scrapped for parts and repurposed, which means basically everything has some value even if worthless in a bartering sense. The result of this is that it's easy to feel compelled to collect everything.

There's value in doing that, though. These parts are used to construct modifications for weapons and armor in a component-based system. Guns can have their barrels, receivers, sights, and grips replaced with parts that affect damage, range, accuracy, recoil, magazine size, and fire rate. Armor can be constructed from individual segments (head, torso and each of the four limbs) and each part can also have multiple mods affecting resistances, carry capacity, and other benefits. 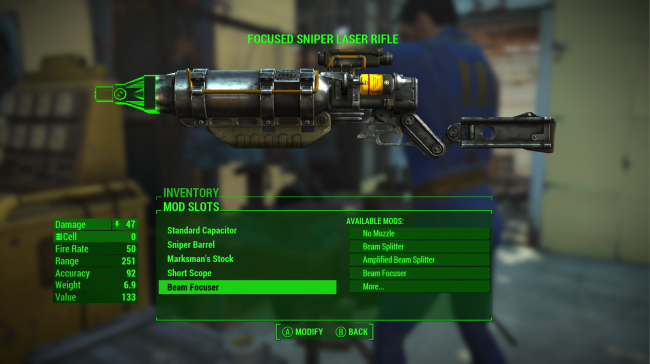 Even more modification options are available for suits of power armor. Just like the standard armor worn by characters, power armor comes in these same segments, which can be mixed and matched on any frame. Each segment can have their resistances upgraded and get an optional mod providing benefits suited to the component (arms offer damage bonuses, leg mods affect movement, and so on). Power armor can also be painted with collected color styles, giving another stat bonus when all parts fit the same theme. 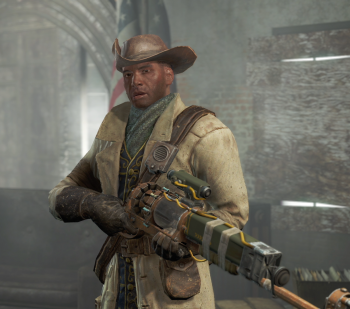 As deep as the weapon and armor modification system is, that's just the tip of the iceberg in terms of crafting. As the player explores, they'll encounter settlements which are struggling to survive or have previously failed. The player can assume management of these settlements and use their collected resources to build new structures and establish communities.

Building a good settlement means ensuring that the needs of its settlers are satisfied. Settlers need food, water, a bed, and protection to thrive, much of which the player will have to provide. Vegetables can be planted as crops, while building pumps and purification systems keeps a supply of water on-hand. To defend settlements from random enemy spawns, guard posts and turrets can be constructed. Some items in a settlement need electricity to function, requiring the player to build generators and run wires to powered objects. A variety of switches, pressure plates, and timers allow you to design deathtraps for invaders, if that's your kind of thing.

The building interface for settlements works adequately in most circumstances. After entering "Workshop Mode", objects to be built are selected from a menu and aimed into a suitable location. A few styles of pre-fabricated buildings are available, or the player can make their own using floor, wall, and roof tiles which snap together at edges. Furniture, decorations, and container items can be built and similarly snap to their appropriate surfaces when placing.

As placement is done entirely in first-person view, it can take a little fiddling to get objects exactly where desired. When objects can't be placed in areas, it's often difficult to determine why. This is particularly vexing when trying to place walls with a door frame, which often don't snap to other walls when it seems like they should. These problems aren't too detrimental, more of an annoyance than anything, but they can make the development of settlements tedious and time consuming when it really should be at its most fun. There also doesn't seem to be much consistency in how settlement populations grow. You may have two settlements that both have the necessary requirements to attract new settlers and only one of them will see growth while the other just rots for no explicable reason.

While it can be a lot of work, there is a payoff. After joining a community, settlers will automatically start harvesting resources. Excess food and water is stored in the settlement's workshop for later collection by the player, along with caps and other random junk scavenged by settlers without a specific task. By acquiring specific perks, stores can be built to generate a steady trickle of income. And every object built with the crafting system, whether a weapon mod or a windmill, is rewarded with experience points, offering a progression path not wholly dependent on combat. Apart from the tangible benefits, there is also a sense of satisfaction to be derived from building settlements. Despite (or perhaps because of) the occasional frustration caused by the building interface, getting all of the pieces placed just right feels like an accomplishment.

It simply wouldn't be Fallout without some technical hiccups. While perhaps not as bug-laden as other games in the franchise have been at launch, you'll likely run into oddities now and then. NPCs have somewhat frequent pathfinding issues, running into, clipping through, or otherwise getting stuck on environmental objects. A very specific, recurring glitch causes the game to fail to load armed explosives in environments where they're intended to be, only to reappear in a subsequent visit, usually when you're backtracking under the assumption that all threats have been dealt with.

At a 1080p resolution on PS4, the game does occasionally dip below 30 fps, though our limited testing suggests this may be a less common problem on Xbox One. There are rare cases where textures and objects pop in, the infrequency of which should probably be celebrated in a Bethesda product. On PC, a recurring glitch causes the player's model to disappear, making the Pip Boy menus and aiming down the sight useless - this isn't disastrous, as reloading a quicksave fixes the issue, but it's an occasional frustration.

Bethesda has succeeded in many ways with Fallout 4. The Commonwealth and its characters do justice to the wasteland, and being in that world is as engrossing as ever. Combat is faster-paced and more enjoyable than it has been previously, thanks to system refinements, more effective use of the environment, and the new implementation of power armor. Its crafting and settlement systems, though simplistic and a bit arcane in terms of how they function, are easy to become lost in and can extend the game indefinitely.

Whether or not players find other changes displeasing, such as the new dialogue system and its limitations, is likely going to depend on their personal relationship with the Fallout series. Newer players will probably never know what they're missing and are likely to have a fantastic time, while fans who have stuck around may be disappointed with the direction Fallout 4 takes.

Bottom Line: While Fallout 4 has some concessions in its RPG backbone to make a more accessible game, the post-nuclear wasteland remains as intriguing as ever.

Recommendation: New players will probably have a wonderful time. Long time fans may be disappointed with the game's new direction.