Pulse was a finalist in the Independent Games Festival and a 2012 Unity Awards winner. To bring their prototype to life, Pixel Pi Games turned to Kickstarter back in March/April 2013 for crowdfunding. They ran a successful campaign and released the full Pulse game on Steam over two years later.

Eva is the protagonist of Pulse. She lost her eyesight when she was young and had to learn to rely on other senses. Gameplay in Pulse is like being Toph from Avatar: The Last Airbender. Eva's sense of direction and sight is through soundwaves. Along the way, she meets these adorable creatures called "mokos" - picking them up and throwing provides a glimpse of the land via their sounds. Their primary function is taking a good beating wherever Eva ends up throwing them. But Mokos also help open doors and navigate thin ice. It's never explained how Eva is able to see them in a physical form. Mokos dot the darkness on the map with their white specks of cuteness despite Eva's blindness. The story never explains who the moko animals are or why they've decided to help Eva.

You will bump into walls, a lot. During the first few levels, it's also easy to fall into endless pits and not know where you're going. Pulse has no "game over" state or failure point that forces you to lose. Eva just gets teleported back to the last in-game checkpoint every time you die. There are times where you'll get lucky and Eva will hear the wind in the distance. Most of the time, that's a solid indicator of where to head next.

Eva will climb mountains, trek through temples, and face tundra and desert wastes. The diversity of Pulse's level design manages to avoid a feeling of repetition. The idea of navigating into the blind unknown presents a series of different puzzles and arrangements. At times, there are beasts that Eva will need to listen for and wait until they move far enough way to pass. Jumping puzzles to reach high ledges to progress is another type of challenge you will face. This proved to be much more difficult when playing a blind protagonist. The visuals are basic polygons and shapes to reflect the imagination of Eva's mind reacting to the sound waves. For the ambitious achievement hunter, there are 50 different orbs of light to collect. A second playthrough to go hunting would be tedious given Eva's blindness. Some sections of the game are linear, others take place in open spaces allowing exploration. 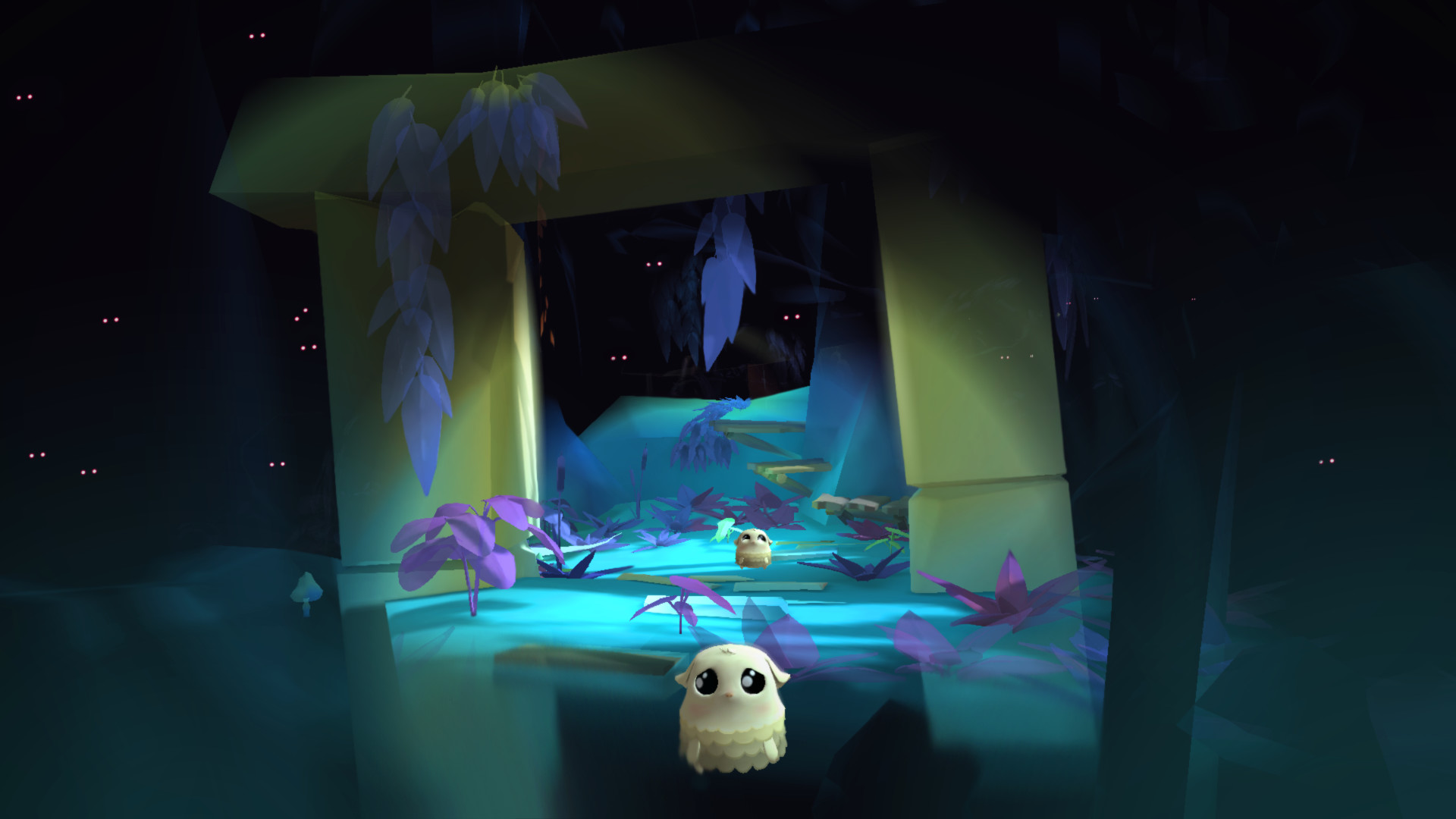 A guide crow accompanies Eva on her journey through the game, serving to be a plot device and backstory. Eva wasn't meant to leave the village at all, the cursed people must live on the back of some giant beast. The story of Pulse was a simple one with not much room for character development of any kind. There is an achievement for completing the game under thirty minutes, for example. Eva doesn't speak at all during the whole game she appears to be mute while also blind. The only character with emotional depth is the crow that guides Eva on her journey. The powerful being that cursed Eva's land explains their side of the story a bit towards the end of the game. It provided some necessary context to the plot.

You never see Eva's village or family, they're only mentioned by the guide crow as you both travel along. I feel this is a huge wasted opportunity to provide emotional depth to Eva as a character. Introducing Eva's home would've added more of a stake to her quest to free everyone from the curse. If everyone was overprotective, it would've been neat having an escape the village level. Instead, you start out at what appears to be the moment after Eva has escaped to the island the game takes place on.

With the consideration that Eva has to rely on sounds to survive in her world, the audio in Pulse had to be exceptional. The sounds connect with the visuals to provide player sight. Gears turning a mechanical contraption making cranking sounds and light up the screen with shades of red. Rocks falling from far off cliffs give off yellow waves showing a nearby ledge. The soundtrack and effects held up Pulse, orchestrating a quality atmosphere.

The highly limited graphics options of aspect ratio adjustments, resolution toggling, and texture quality were disappointing to see. The sound options were the standard sound effects and music being adjustable. An addition as simple as being able to change the brightness and contrast would have been appreciated in a game where focusing on the different senses is a central point.

Pulse was an interesting game of exploration into a distant world. But it was also a chance to see the challenges related to blindness. It could've used that to invoke a more emotional response from the player instead of being limited to a game mechanic. Pulse was a platforming challenge, but I wish there was more of a story to remember for it.

Bottom Line: Playing a blind girl helped me see how challenging it was, but I wish I saw a reason to care about the world Eva lived in.

Recommendation: For fans of art games like Journey, this game will provide a fulfilling experience.