Developed and Published by Chainsawesome Games. Releasing on November 16, 2015. Available on Windows/Xbox One. Review code/copy provided by publisher.

Knight Squad has been in early access since May 2014. After a long journey, it is finally seeing the light of day on Steam and Xbox One in November 2015. Steam's description called Knight Squad a "Bomberman-style game" and it delivers that - in a destructive chaos, blowing-up-your-friends sort of way. It lacks any sort of story or narrative to explain why anything is happening, though.

You have your choice of a cast of knights right from the start. There's Storm, Smash, Shooter, Selfie, Skills, Shockwave, Solo, Savior, and Sparkles. Getting certain achievements unlocks extra knights. Each has their own animation, giving them a touch of personality. Their in-game models have their own visual qualities that make them unique. From sword types to armor appearances - it went beyond the standard palette swap.

At its core, the goal of Knight Squad is killing the other knights in one way or another. Weapon choices range from swords/bow and arrows to things like miniguns and laser blasters. While in essence the fire power of advanced technology is cool - it threw off the balance of the game. 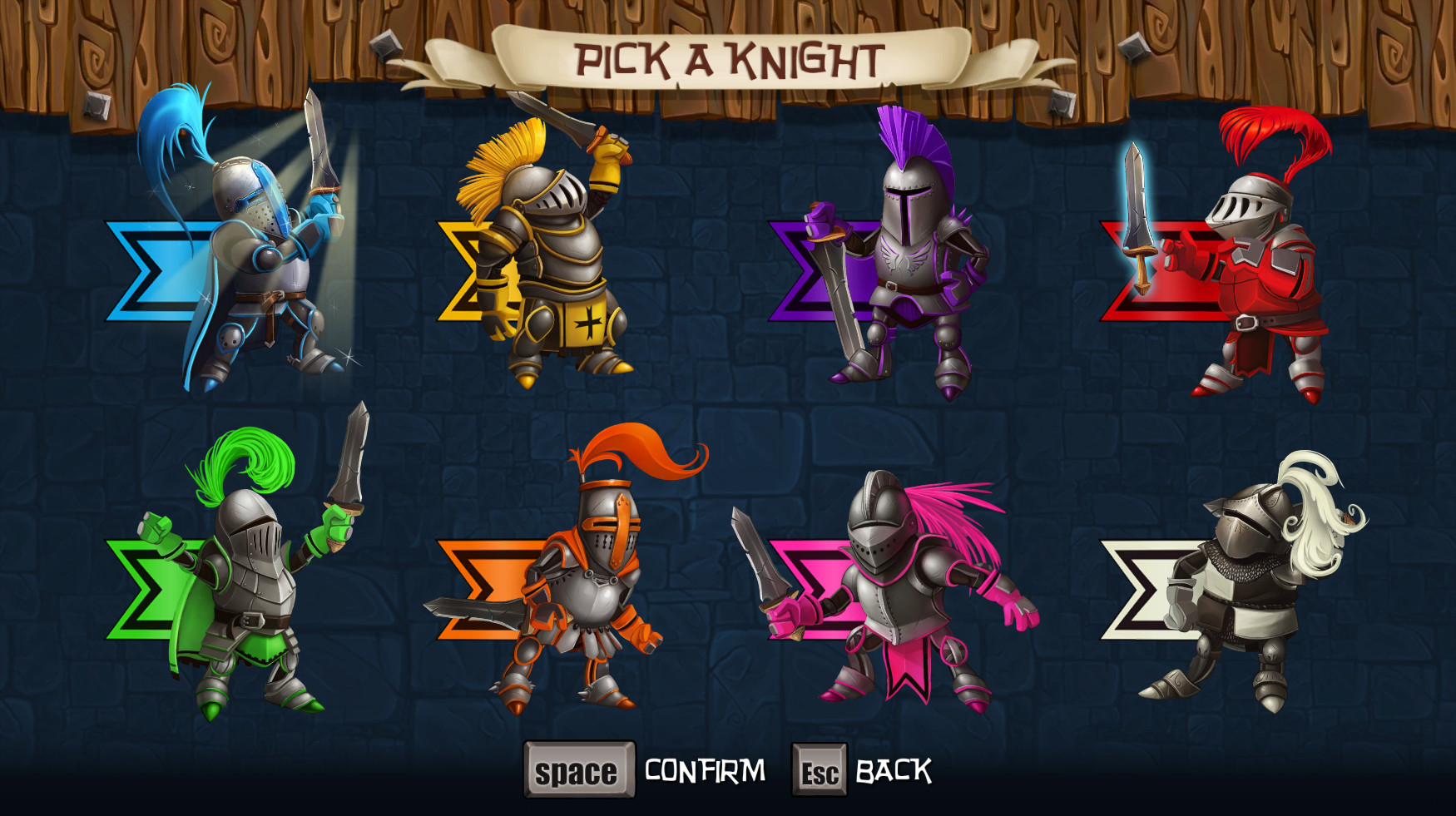 The game options are either a free-for-all setup or team based between red vs blue opposing sides. In 4v4, there's Team Deathmatch, Domination, Crystal Rush, Capture the Flag, and Soccer. In free-for-all, there's Juggernaut, Capture the Grail, Gladiator, and Last Man Standing. With "The Extra Chivalrous" DLC there's four additional game modes - Jail Break, Arms Race, Soul Hunter, and Serial Killer. I appreciated the selection of game modes but many of them were too alike to feel distinct. If there were 1v7 or 2v6 types of modes it may have helped reduce this problem. The matches are chaotic when you face off against seven other knights. The maps aren't wide enough to leave much room for cover.

The available assortment of maps made game matches interesting. They feature destructible walls and environmental hazards working against both sides of the battle. It kept me on my toes and more engaged in what I was doing. The game developers made the maps fit the particular game modes. Then further expanded by offering different map varieties for each type of mode. Unfortunately this means many of the map textures get reused. It leads to a sense of repetition even if playing between different maps. 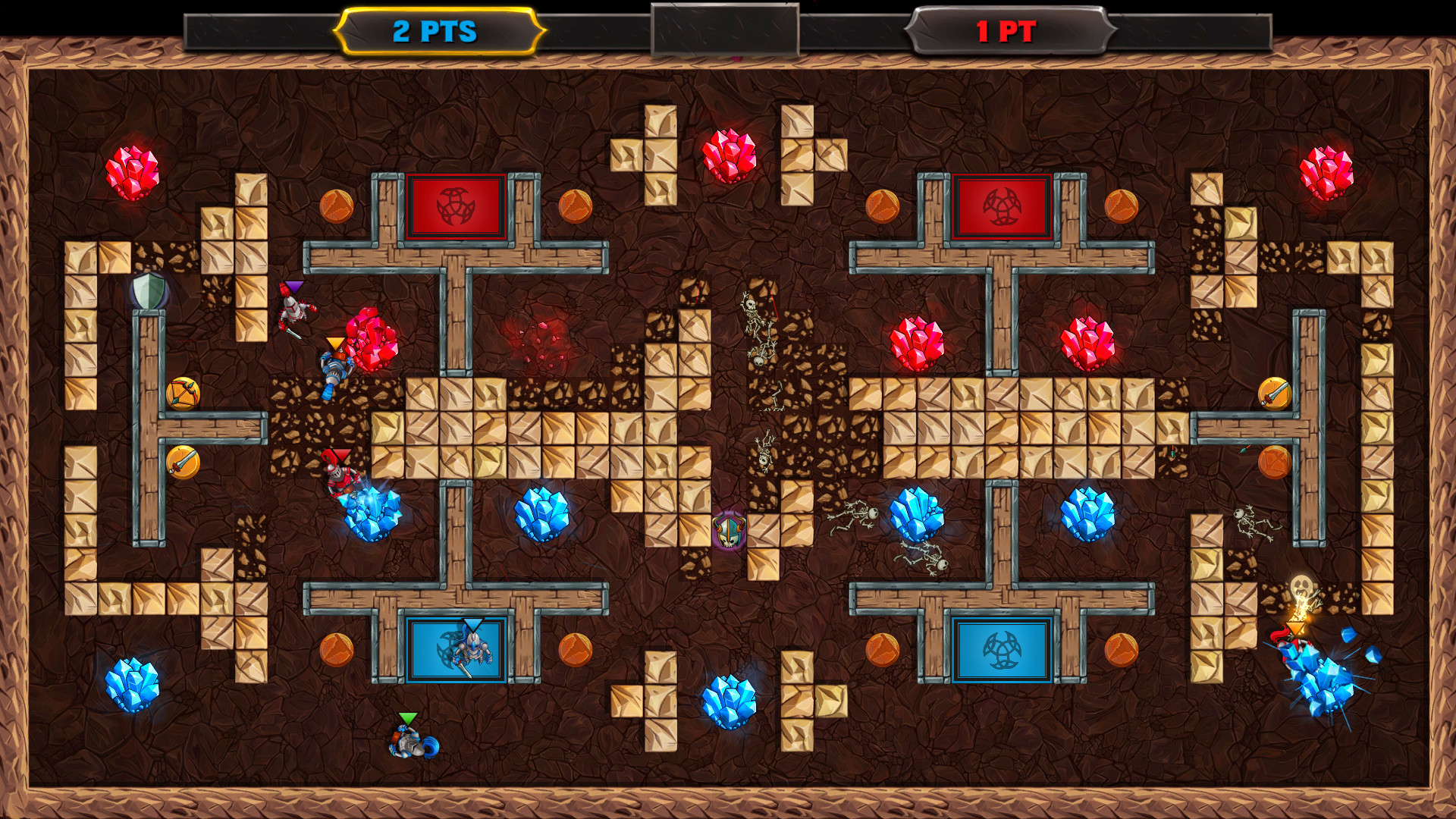 Menu Options were scarce. The graphics options were resolution toggling, v-sync, and something called camera shake. The only way to access this is from the main menu. There's no option in-game to pause and adjust video or audio on the spot.

Multiplayer had nobody in the lobby, so I couldn't review that aspect of the game. Luckily, singleplayer with seven bots was pretty entertaining on its own. The four levels of AI go from easy to extreme. "Easy" opponents get trapped running into walls on occasion and aren't too bright. The "extreme" AI is able to provide a degree of challenge if you wanted a tough competition.

One of the main draws of Knight Squad singleplayer is the challenge gauntlet. You face off against a colorful variety of monsters. It's a test of patience. You have to look for the patterns amongst the obstacles and wait for the right moment to strike. It's easy to get frustrated and end up with shoe prints all over your office wall. The "lightning rampage" has you slaying legions of dead who shamble toward you. "Attack of the Trolls" pits you against eight trolls that charge spiked shields. You have to dodge their assault and step out of the way at the right moment. Out of the six available challenges, the first five of them were thoughtful and put together. The last one, the Dark Knights Army challenge, felt like a letdown in comparison. It goes back to the main game's premise of defeating other knights. After fighting a bunch of impossible monsters, it felt out of place to have an easy final task. Leaderboards for each challenge help to brag your successes along with steam achievements. It was just enough of a motivator for me to keep going after countless deaths.

Knight Squad is a decent game to play with friends. But the single player features could have used more meat to it. The challenge mode was a nice deviation from the rest of the game. I wish they expanded upon that part more to give replay value. Knight Squad has many game modes choices. But it's oversaturated to the point where they feel similar, same with the maps.

Bottom Line: Knight Squad is a fun distraction to play with friends, but there's nothing for the single-player lone knight to sink their sword into.

Recommendation: This game works for fans of the chaotic Bomberman party game.