Developed by Treyarch. Published by Activision. Released on November 6th 2015. Available on PC, PS4 (reviewed), and Xbox One. Multiplayer only version available on PS3 and Xbox 360. Review copy provided by publisher.

The Call of Duty franchise debuted over a decade ago, growing steadily over that time in revenue, popularity and content. With the release of Call of Duty: Black Ops II the series saw major innovations in gameplay by featuring branching storylines, multiple endings, and the introduction of the Pick 10 and Score Streak systems in multiplayer. Black Ops II has managed to maintain its popularity over the last three years, and still averages 12 million monthly users; so it's not unreasonable that with Call of Duty: Black Ops III, fans are expecting a bigger and better game than before. 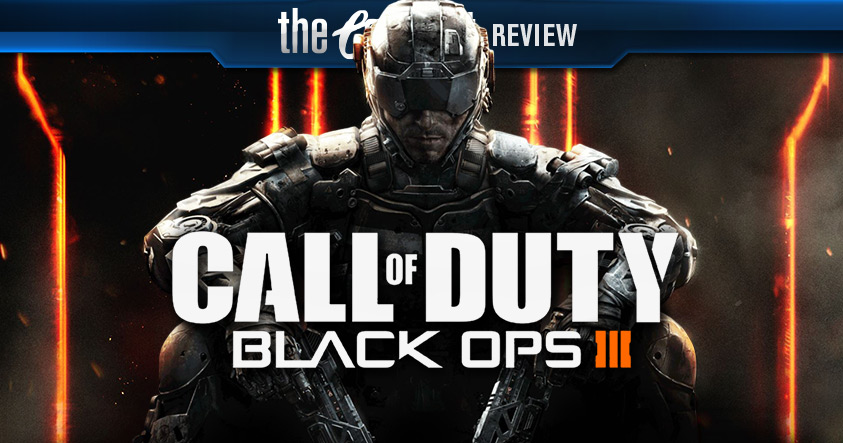 Black Ops III takes place 50 years in the future, and 2065 looks to be a hellish time to be alive. A new cold war has spawned advancements in science and technology that blur the lines of morality and ethics. Super soldiers are now fitted with upgrades that include bionic limbs and Direct Neural Interfaces, or DNI, giving them total control over their own physiology. These physical enhancements allow soldiers to be interconnected with each other, producing stronger, faster killing machines. The campaign puts players into the shoes of an augmented soldier investigating a CIA site in Singapore. Your mission is to investigate why the secret site has lost all contact. What follows is a complete catastrophe. A leak in military intelligence leads to the collapse of covert operations around the world, with high levels of instability and chaos following. Your mission as part of the Black Ops team is to venture into enemy territory, find your comrades, and try to figure out what really happened. The bleak setting is structured rather ingeniously around an open-ended level design. This structure encourages players to jump back into completed missions, adding a high degree of replayability for those interested. 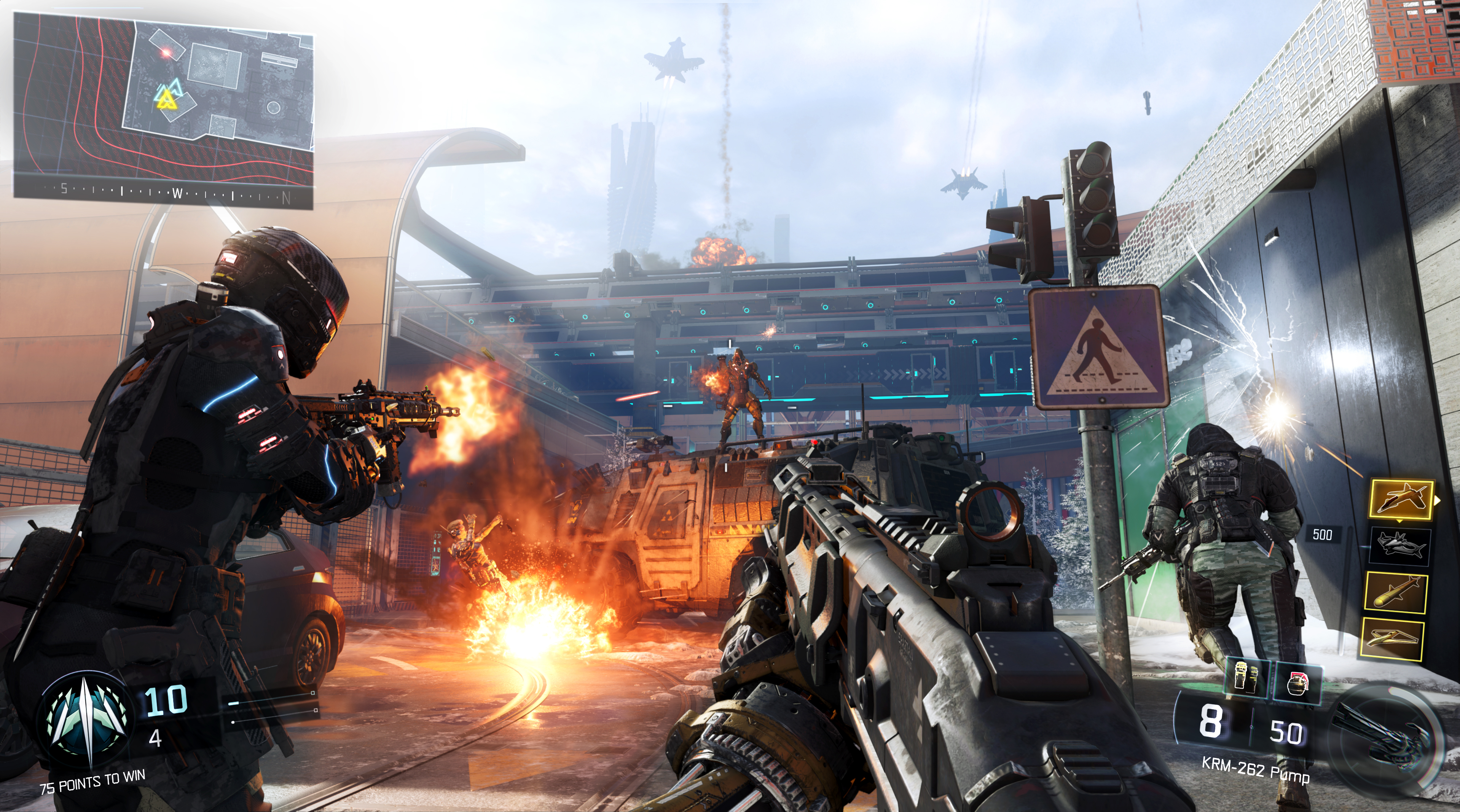 Movement in the game is more fluid than past Call of Duty titles as a result of the game's new thrust jumps, wall running, and power slides. Chaining player movement definitely creates a more unique experience, making travel between objectives much more enjoyable. Black Ops III takes into consideration that people have different playstyles, though, and encourages them to try out a variety of strategies - both incorporating the faster movement and not. As you progress throughout the game you unlock customizable new DNI powers called 'Cyber Cores,' which do things like remote hack computers or take control of drones, that you can use at any time.

While all of the new features created some interesting gameplay, the single player campaign felt a little lackluster, and was at times confusing to follow. Treyarch went in a bold new direction this time by trying to add in outrageously weird, nightmarish sci-fi elements, but there's just too much going on to follow coherently; making the single player campaign feel too predictable in how it tries to impress the player. The fact that the game allows you to tackle missions in any order, and have up to 4 players in co-op (online or local), is really the title's saving grace.

The levels are designed to give players more choices in the way they play, which includes joining up with others to share perks and weapons. After successful completion of the campaign, players will unlock 'Nightmares' mode allowing them to replay the story with zombies in place of the original enemies. If you're brave and looking for even more of a challenge, then players can try their hand at the 'Realistic' difficulty mode, putting only one hit between you and death's door. 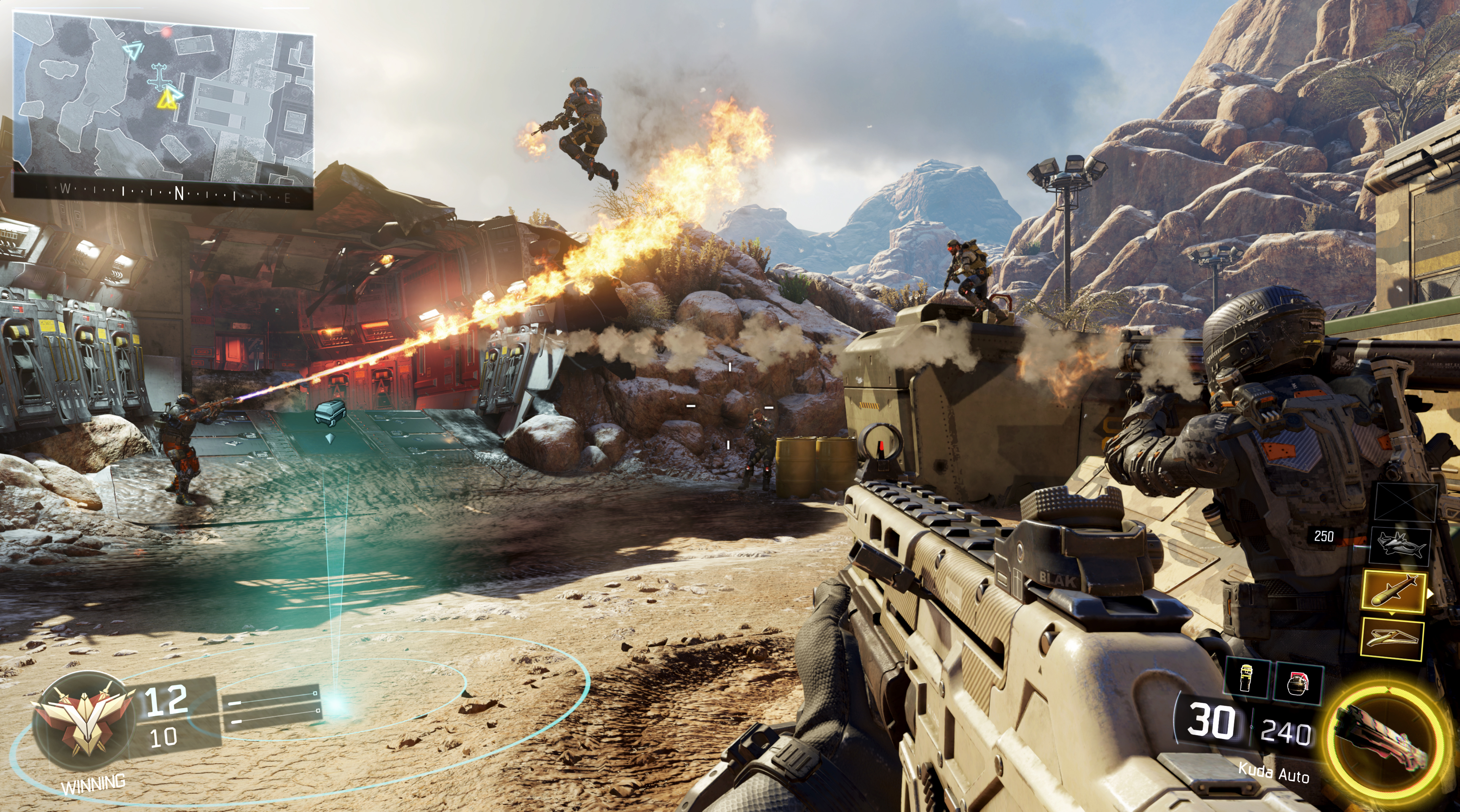 While single-player has its perks, the multiplayer component is the real meat and potatoes of Black Ops III. Free Run mode includes four race courses to test out your movement skills before heading into multiplayer battles. The training mode allows you to challenge friends to parkour-style races, improve your times, and rise to the top of the leaderboards. Practice makes perfect, and Free Run helped me improve my wall jumping and thrust jumps before heading into multiplayer combat.

Multiplayer Black Ops III has been completely overhauled with the new movement system and the ability to take control of nine specialists. Each playable specialist has a special strength and power weapon that they can take into matches that charge up during gameplay. Instead of playing a nameless soldier, players now have access to the back-stories and quotes of the various characters to decide which one works best for them. This new release is the first Call of Duty to feature a playable female protagonist, on top of two badass female specialists, Seraph and Outrider. Seraph is a personal favorite for stacking score streaks and landing quick kills using her special weapon, the Annihilator, and her combat focus ability. All nine specialists have their own unique strengths and weaknesses, and it will take a few matches on the 12 different maps to decide which one works best for your playstyle. 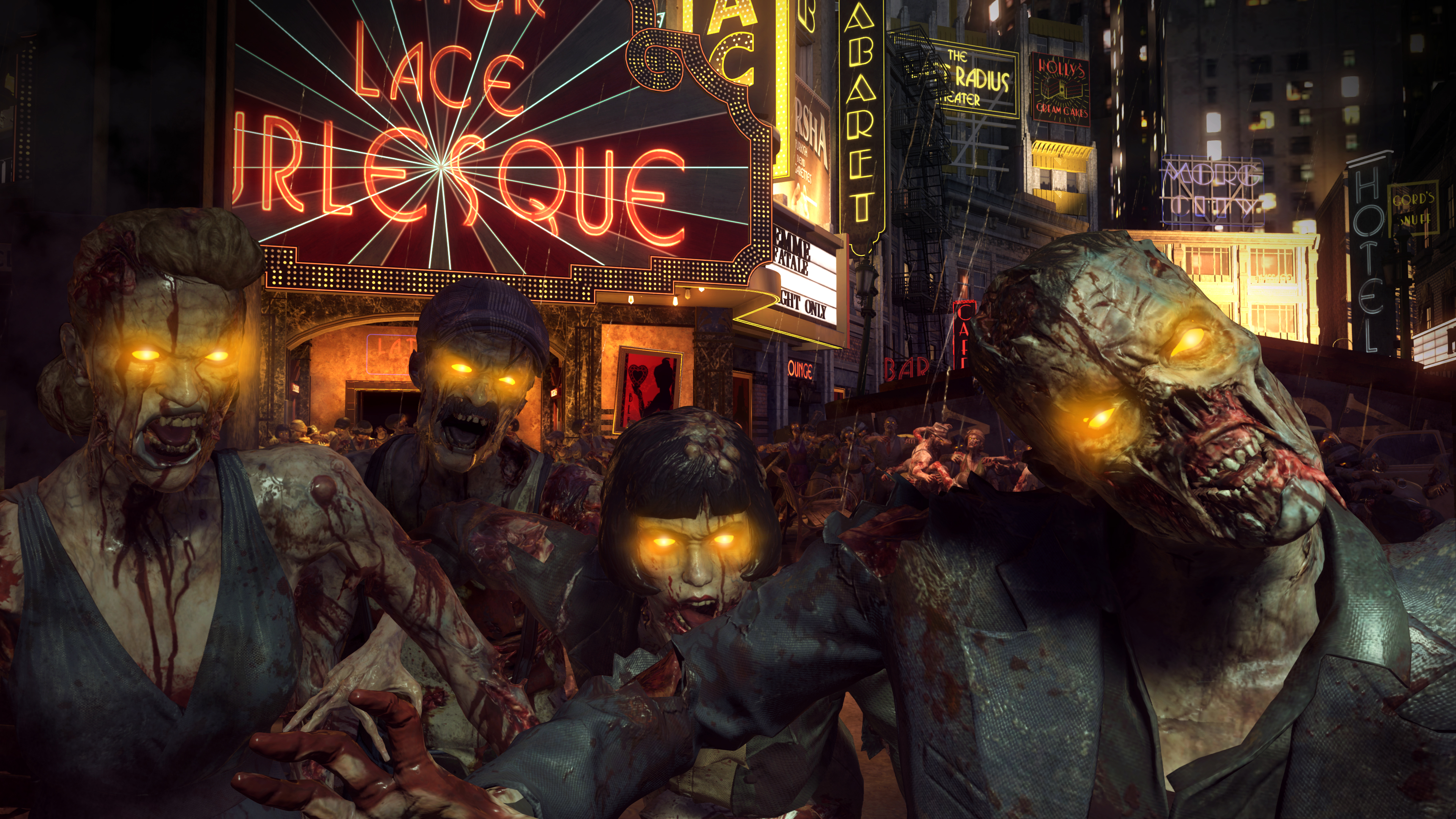 Zombies return in Black Ops III and are bigger, badder, and hungrier with the undead creatures mutating into their very own game. The new zombie map, titled "Shadows of Evil," features a fantastic voice cast that includes Jeff Goldblum, Ron Perlman, Heather Graham, Robert Picardo and Neal McDonough. Taking place in a beautiful noir-style level during the '40s, well away from the military setting of Black Ops III, players fight hordes of zombies as a diverse set of characters while trying to secure their location. In order to progress through the map, players must frantically kill zombies to gain currency, unlock gates, and purchase items. 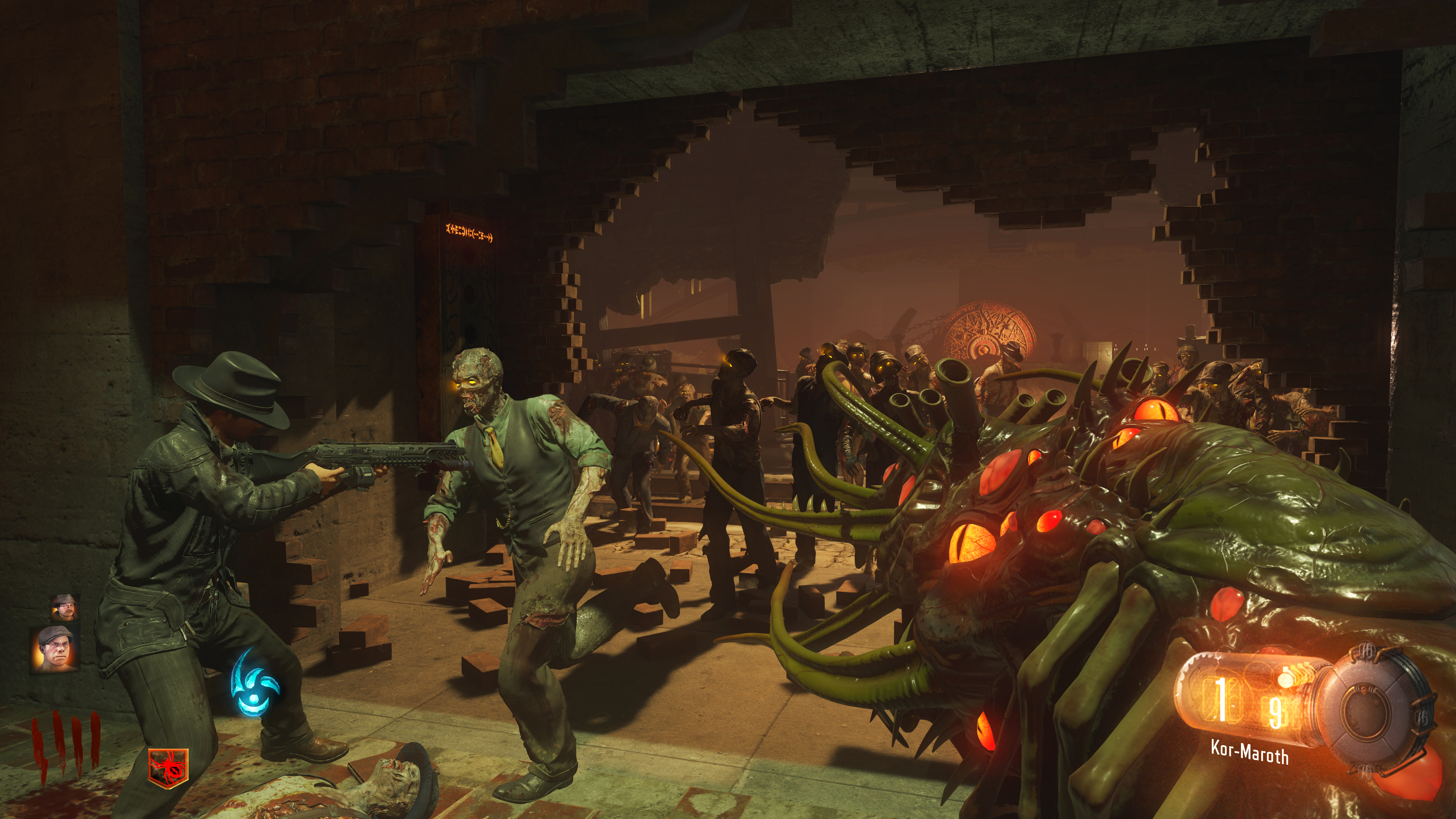 Zombies gets harder with each new wave, so taking full advantage of the "Beast," upgraded weapons, and gumballs is the only way to survive. Players are able to change into the Beast, a tentacled monster, for short durations to access secret locations that contain special powerups and items. Gumball machines are also located through the map to purchase special treats that give players certain abilities like increased speed or defense. Zombies mode also features "The Giant Map" to Season Pass and Collector's Edition owners--a remake of the Der Riese map featured in the original Black Ops game. Black Ops is all about zombies this time around, and a hidden arcade game, Dead Ops 2: Cyber's Revengening, drives that home. There's even XP-based progression, which adds a lot of depth to Zombies - making it the best version yet.

Bottom Line: Black Ops III has upped its game, giving exciting updates to the fan-favorite Zombies and the classic multiplayer, but the single player doesn't measure up to the same standard.

Recommendation: The developers took bold risks with Black Ops IIIand many of those are what long time Call of Duty fans have been yearning for. Even if you have never played a Call of Duty game in your life, the new Zombies mode is something any Left 4 Dead or Evolve fan will appreciate.