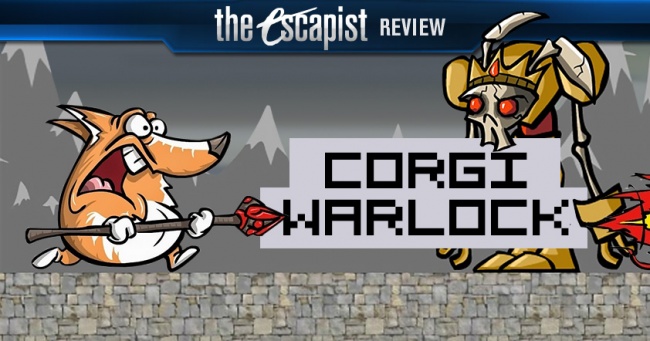 Corgi Warlock sounds great on paper: Take adorable animals, turn them into badass combat magicians, and pit them against massive armies of undead foes. With countless anthropomorphic animal stories in games, movies, TV shows, and comic books, you'd think Corgi Warlock was a sure success. Sadly, making it work in practice is really hard. You can't just fling corgis, pugs, fireballs, and laser beams onto the screen and expect a smash hit to emerge. You need strong level layouts, solid character designs, and a host of other features which engage the player.

If you haven't already sussed it out, Corgi Warlock is not the mind-blowing magical corgi experience we hoped for. It's a great concept with some really slick monster designs, but the gameplay is mediocre while the combat systems are disappointingly monotonous. While there's fun to be had, especially with a group, Corgi Warlock is unlikely to draw players back after a session or two.

As someone who loves puppies and laser beams, I hope you understand how difficult that was for me to write. 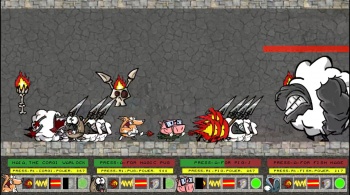 Corgi Warlock takes place in a magical world populated by anthropomorphic animal communities. The Bunny King, once a noble and just ruler, has been corrupted by demons and transformed into the Evil Bunny King, whose armies devastate the land. The only hope for this world is Maia, a corgi gifted with magical abilities. Joined by other animal warlocks - including a pug, a pig, and a fish - Maia must collect spells and complete adventures on a quest to end the Evil Bunny King's reign of terror.

As you proceed through Corgi Warlock's chapters, you'll gather various spells and unlock new abilities. Maia starts off flinging fireballs, but can eventually toss lightning, fire laser beams, and even unleash a "Corginado". You also have defensive spells at your disposal, such as health regeneration or protective shields. Most of these spells recharge over time, with stronger abilities taking longer to prepare. But the most damaging spell uses "Corgi Power" (or Pug, Pig, or Fish power for other players) to unleash giant flaming Corgis at enemies. Corgi power can be recharged by killing enemies or collecting potions, but you'll always want to make sure you have a little saved up for major boss fights.

So far, so good - except getting new spells doesn't always leave you feeling more powerful. The vast majority of your enemies are always low-level fodder which can be wiped out by Maia's starting attack. Some spells have better reach for taking out multiple enemies at one, but spamming the fireball key has a similar effect. Most remaining enemies are mini-bosses which require several blasts before going down, but there's very little strategy beyond finding a safe position and cutting loose. Everything feels like more of an obstacle than a challenge - you're simply mowing down foes until something shows up that can slow you down briefly.

It certainly doesn't help that levels are incredibly one-dimensional. For a side-scrolling platformer, there's surprisingly little platforming in this game. Most combat effectively takes place in a straight line, forcing you to progress forward, backward, or occasionally jump over a deadly fireball. And since enemies continuously spawn on either end of the screen, you're basically slogging through everything until you reach the exit. When you do reach a platforming section, it's usually just to transition between horizontal combat zones. Major boss fights are a little more layered, but even those usually take place within a single screen. 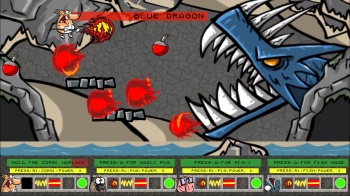 The good news is enemy designs are varied and interesting. You've got skeletal bunny soldiers, giant rock monsters, grim reapers, and even sheep with spears, and that barely scratches the surface. Some enemy also has unique attacks that require you to adjust your strategy - some approach your position, others light the floor on fire, and one throws bouncing boulders. Each new creature adds a little personality to Corgi Warlock and makes a refreshing change to the world. Unfortunately once you've adjusted your strategy, the gameplay becomes monotonous again, but they're great designs all the same.

I truly wish the same was true of Corgi Warlock's player characters, but their charm wears off pretty quickly. Maia in particular is always locked into the same facial expression, like she's a Spartan from 300 rushing into battle, and her partners aren't a vast improvement. Yes, Corgi Warlock uses cartoon logic, but I've never seen a Corgi with anything close to that appearance to warrant the design choice. It sounds like a minor point, but these are literally the characters you follow through the entire game. Making them appealing is important. Instead these characters come off as unnatural, and worst of all, not very cute.

There are other elements of Corgi Warlock that feel jarring. When you die, defensive spell meters don't regenerate with your health, which can make obstacles more difficult. The character, backgrounds, and stone tile designs don't always fit together, as though they come from different games. And while there's nothing wrong with delivering plot points via text boxes, using modern computerized fonts makes it feel like an afterthought. These elements don't break the game, but they do suggest it's unpolished, and could've used more time to tighten up the UI and world design.

Corgi Warlock's faults would be more forgivable if its characters were a little more charming. Heck, they'd be understandable if this was a browser game instead of a title from Steam's catalog. But as it stands, Corgi Warlock is a mediocre title that entertains, but doesn't quite satisfy. Here's hoping we'll have something else to scratch that anthropomorphic puppy mage simulator itch soon.

Bottom Line: Corgi Warlock has a great concept and decent core mechanics, but never quite elevates itself into an engaging or memorable game.

Recommendation: Unless you're short on options for a co-op gaming session, you should save your money and buy an actual corgi one day.