Developed by DICE. Published by Electronic Arts. Released on 17 November, 2015. Available on PC (Reviewed), Xbox One and PS4. Review code/copy provided by publisher.

Here's honesty about what you're going to read here: I know a lot of this sounds like I'm ragging on the game for being absolutely terrible, but it really isn't terrible. The game feels solid and fun: it's got a lot of polish and it really did make me feel like I was inside a Star Wars movie. What's there works and works well - even if it's very simple. 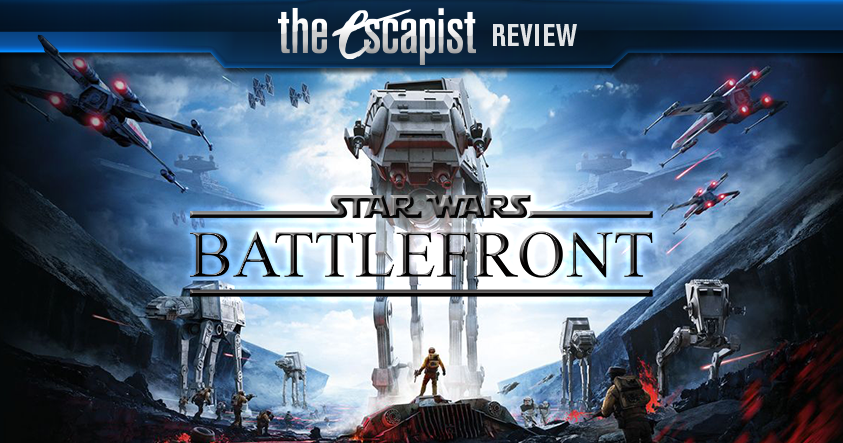 Almost everything about the game seems to be pointed towards people who rarely play - or have never played - modern shooter games. When you first boot it up you're encouraged to try out the training missions. They're a pretty good way to get yourself familiarized with the way the game plays, but apart from spaceship controls and handling, everything else is immediately apparent to anyone who has ever played a shooter in their life. It's not stuff most people will need to be taught.

The game has a myriad of modes for both online versus and co-op, but most people are going to jump into the 20 on 20 Walker Assault mode. The game bills Walker Assault as the epic Star Wars troops vs. vehicles vs. spaceships mode ala Battlefield's Conquest mode or the prior Battlefront games. Alternatively, there's Supremacy, which plays essentially identical to Conquest: Two teams fight over three control points. I was disappointed. Only four maps exist for these two modes. For comparison this same developer's previous title, Battlefield 4, launched with ten maps, which were available for play in all of its game modes. Battlefront's Season Pass promises 16 additional maps, though we don't know how many of those 16 will be for Walker Assault/Supremacy. Based on past games which have tried this model, it's likely these will serve only to splinter the community. 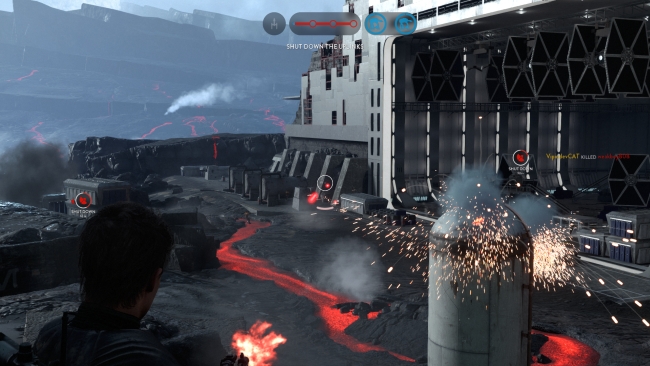 Once you do get into the fight, you'll have a blast! Combat is satisfying, with all of the various laser weapons having that signature Star Wars "pew pew!" and the third person mode really making the game feel cinematic. The battles themselves are frenetic, with swarms of rebels and Stormtroopers backed up by X-Wings, Tie Fighters, AT-STs and gargantuan AT-ATs. The game is absolutely beautiful, with all of your favorite Star Wars locales brought to life in incredible detail. It runs as smooth as butter, has very little in the way of bugs and glitches, and HOLY SHIT THAT'S DARTH VADER KICKING ASS AND TAKING NAMES. AWESOME!

However, once the awe and glee of taking part in The Battle of Hoth wears off, you'll find that there really isn't much beneath the surface. There isn't that much difference between all those cool laser weapons, and the lack of Battlefield-style dedicated classes and weapon modifications means that every Stormtrooper is functionally identical to the one standing next to him - with the exception of two powerups. (I would say three, but you'd be mad to not take the jetpack.) The battles, while huge in scope, lack the fantastic teamwork features of Battlefield, with squads replaced by a vague "partner" system. Features like spotting enemies, multi-seat vehicles, voice chat, and the commander are notably absent. The vehicles handle like shopping carts, and the hero/villain spawning system is so random that you could play the game for hours and never once get to play as Lord Vader. 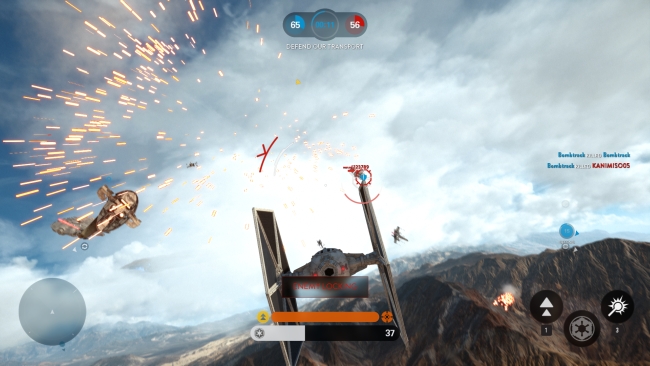 The lack of required teamwork is the game's biggest problem. You could have replaced all of the human players with AI bots and I likely would not have noticed. The game tries to get you right into the action by spawning you no more than a few steps away from a battle or a vehicle spawn. Spawning into combat makes teamwork and planning in reaching, then either attacking or defending, an objective completely unnecessary, so the epic 20 versus 20 battles of Walker Assault are more like 20 different one on one duels taking place simultaneously. It's a shame, because Battlefield 4's squad system made it so I was always excited to play with a group of friends. It made us work together as our customized classes of choice in order to take objectives and win the map, rather than just racking up kills.

This is what I mean when I say that Battlefront is a game for Star Wars fans, not gamers. It's as faithful to the movies, and as accessible, as humanly possible in order to attract even the newest of fans. In the process, it has been stripped of all the features and innovations players want, nay, expect in a team-based online shooter of this kind. It's disappointing to both audiences, denying shooter fans a deep, nuanced game, then denying Star Wars fans the rewarding master of investing time into a game.