The past few years have certainly been interesting for the MMO space. After its infancy in the 90s with Ultima Online and Everquest, then rampant popularity in the early 2000s following the success of World of Warcraft, a lot of the audience has disseminated into other games. Many of the social aspects and progression that originally drew players in has bled into other genres. MMOs just aren't bringing in the crowds they used to. However, a few companies have been able to carve out a niche for themselves - largely by marching to their own beat.

One of those has been ArenaNet, the company behind Guild Wars and Guild Wars 2. While everyone else was trying to make the same gameplay mechanics and subscriptions models work, ArenaNet instead experimented with the core MMO formulas. Three years ago, I greatly enjoyed and lauded the initial launch of Guild Wars 2. The only reason I stopped playing was because I never found that core social group that ultimately keeps you invested.

Over the years, ArenaNet has continued to support Guild Wars 2 with interspersed content updates, from new dungeons and items to world changing story events. It was certainly confusing coming back to a brand-new Lion's Arch, a primary hub city that was destroyed and rebuilt. However, Guild Wars 2 finally released its first full-blown expansion, and I've enjoyed jumping back in for the past few weeks - though I still need to find a good guild. In addition to new world maps, story quests, and the like, Guild Wars 2: Heart of Thorns takes some bold new directions n player progression and end game content.

There are times where it cracks along the edges, but Heart of Thorns is largely the same Guild Wars 2 that captivated me years ago. It's an MMO that encourages players to explore, play, and adventure together like few other games do. 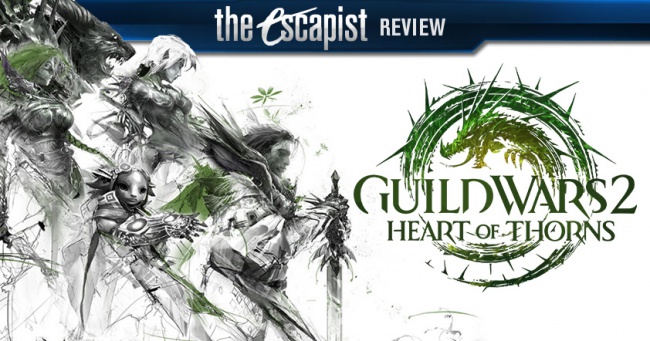 Let's get the big one out of the way first. Unlike pretty much every other MMO expansion, Guild Wars 2: Heart of Thorns doesn't increase the level cap... sort of. It's a little more complicated then that. Currently, level 80 is the highest character level in the game, and Heart of Thorns doesn't change that. However, you will continue to accrue experience in the game and this is instead used to level up account-wide Masteries. A Mastery can take many forms, unlocking specific high level crafting, special vendors, or letting you use certain map navigation tools and abilities. For instance, one of the first Masteries you're going to want to get in order to progress in Heart of Thorns is gliding, which comes in handy for the new content's rather vertical maps. Unlocking new Masteries is also how the game keeps you from blitzing through content like story missions. 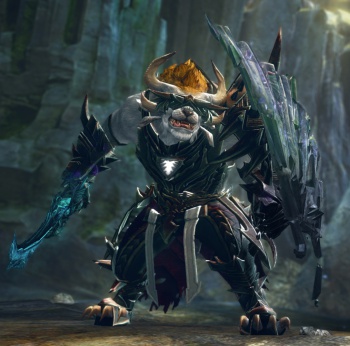 Masteries work well in some places and don't in others. It can sometimes feel like you've been arbitrarily cut off from content when you don't have the right ability unlocked yet, even if it honestly it's that different from a level requirement. It's a little frustrating that you spend a great deal of time running around the map seeing players take shortcuts or explore areas you haven't unlocked the ability to utilize yet, like large updrafts to facilitate gliding around. Though for some that makes getting it all the more rewarding. However, for anyone that's ever played a normal MMO expansion, it's certainly refreshing to not suddenly throw away your hard-earned gear for whatever slightly high level gear is now available. You'll eventually find or unlock better stuff, but at least it's not the first trash mob that drops some rusty chainmail. This can lead to a feeling that you're not really progressing. For the most part you're using the same skills and seeing the same numbers you always have. (Raids have just been introduced, which certainly offer the chance for some shinier loot.)

The other way that the game combats stagnation is with Elite Specializations. For those unfamiliar, Specializations are similar to talent paths or unlocks in other games. They define what your character is good at in relation to anyone else of the same class or profession. Elite Specializations are sort of a redefinition of the class itself, unlocking a new set of skills and weapons that previously were not available to the character. For instance, my Thief has the option of becoming a Daredevil, which lets you pummel foes with a staff and puts more emphasis on dodging. Think Robin from Batman. Though I honestly suspect some of the other professions have more interesting options - they offer a more radical change, like a Ranger becoming a more support oriented Druid.