Xenoblade Chronicles X is a fantastical space opera about exploration and the humanity of heroes. It has giant mecha and a sprawling open world. It's Wii U's biggest JRPG release in the United States and Europe, and this resounding sequel to fan-requested RPG Xenoblade Chronicles is a smashing success and a rollicking good time - even for those who don't traditionally like this genre of game. Xenoblade X is a superb example of world building with a decent plot and fun gameplay, but is held back by a number of questionable game systems to understand. Overall though, it's a superb ambassador for its genre, and will undoubtedly delight those who have been waiting for it. 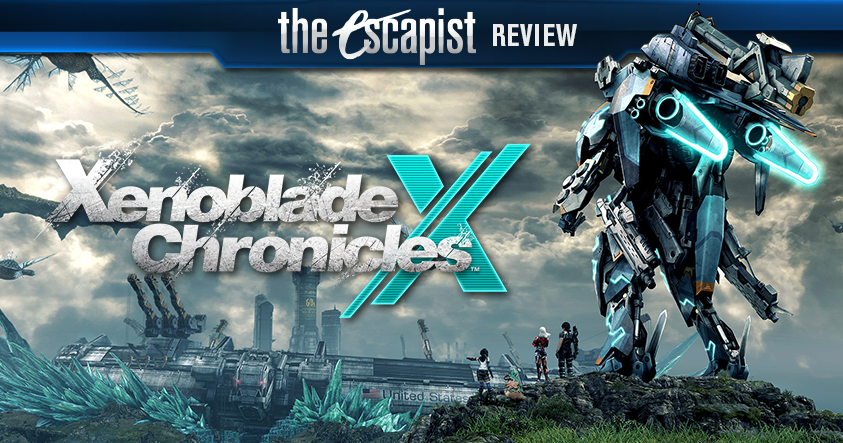 The Power of Melodrama

Xenoblade X uses the JRPG genre's history of melodrama to lay a twisting, if shallow, plot. It's a meandering story of desperate colonists in a space opera universe, humans fleeing the wreckage of an earth destroyed as collateral damage in what appears to be some greater interstellar conflict. The primary protagonists are all part of BLADE, the paramilitary organization dedicated to saving the human race. That story is all based around setting up expectations and knocking them down using a set of key plot twists and staged reveals we won't spoil here, but know that's where the story is going and what its foundation is. The characters themselves are a variety of reductive stock archetypes - the hardened veteran, manic pixie dream girl, teenage prodigy, good-natured hardass, and flamboyant homosexual are the kind of shorthand the game uses. It's convenient and well utilized, if groan inducing, in minor characters. It's obnoxious in long term characters - if someone's going to be around for every mission, you don't want to be able to say their lines before they do. Using that wide cast of characters, the story focuses on themes of ethics, environmentalism, and morality against an unsure scale. It's a story at odds with how much time you actually spend in the game wandering around and picking fights with random alien critters for the umpteenth insect jaw you need to craft your new weapon.

Melodrama is the heart of this game. Every conflict in the story is blown totally out of proportion and taken without nuance. Every misspoken world could end a friendship forever, every attack by unknown alien creatures could drive humanity into extinction. It's so blown out, in fact, that you can easily miss some of where the game's best stories are. Basic and Affinity Missions are very well crafted compared to anemic side quests in some other games, which is refreshing and pleasing. They often have a complete narrative arc and individual characters - sometimes even with a twist or two.

The game's voice acting is mediocre, but at any given time any character could totally flub their delivery - or blow you away. Conversations are weirdly paced, with oddly long pauses between exchanges and what characters say to each other - sometimes stretching into seconds, but never feeling natural. One alien race is subjected to such a horrid voice filter that I muted the game whenever they showed up. It doesn't help that the sound balance is often off - turn on subtitles if you don't want the soundtrack's lyrics to drown out dialogue sometimes.

The strangest part of the story - and of the game as a whole - is your character, newly awakened from stasis after humanity has been on Mira two months. You're a rookie, struck with amnesia, and immediately assigned to the most elite commander BLADE has. It's not clear at first, but you're just along for the ride. This is basically a movie - or more aptly, an anime - and you get a front row seat and the ability to occasionally throw in a cheer or a dash of flavor commentary. It's not very clear why you're afforded special privileges at first... and it never becomes wholly clear. You're a created character for the sake of having a created character. The story neither needs nor requires your presence. It's weird to run combat and then watch NPCs take credit for your direction as soon as the cutscenes roll. The choices you make in dialogue are very much binary and often lead to the same outcome regardless of your choice. If the game wants you to have a fight, you're having a fight. It's disheartening, but you'll get over it when you realize Xenoblade Chronicles X just isn't about you and settle in to watch everything burn.

The game's graphics and world are technically flawless and aesthetically gorgeous. Vast alien vistas are populated with bizarre insect cum dinosaur creatures and strange, Jack Kirby-esque Alien Space Gods. The creatures, and the world of Mira's alien ecosystem, are beyond fascinating, rendered with an attention to detail and whimsical inventiveness. The graphics and open world make the absolute most of the hardware, delivering the best exploration gameplay I've ever experienced. The size, scale, and scope of the world dwarf most other games in the genre. You've played MMOs with smaller worlds than this. The scale of the world is superb, with tightly-designed areas riddled with secrets contrasting huge open plains and mountains suitable for mecha combat.

The sweeping soundtrack by Hiroyuki Sawano hops genres from j-pop to hip-hop, electronica, and classical, all infused with an operatic sense of scope. It fits the game beautifully. Many areas and some combats have unique music, but some of the tracks will start to wear on you. Especially that one hip-hop bit that will get halfway through the first line by the time a combat ends. (I'd love to know how it ends, but I've never had a combat take that long while it's playing.) You can't adjust or turn off the volume of any of the game's sounds. It'll grate on you sometimes.