As you explore, you jog, sprint, jump, and leap your way across the alien landscape. There's not much fear of the unknown, as you can't die from falling and there's nearly no penalty for death. This leads to an atmosphere of happy mistakes and clever triumphs. You'll scale mountains by leaping from boulder to boulder, or leap from one tree to another to avoid the nasty critters on the ground below. In doing that, you uncover overlooks and undiscovered caverns, clever easter eggs, and secret enemies with special loot. You also find iconic places, which serve as respawn points, and place exploration probes that gather revenue and remove map fog of war. Both kinds of locations become fast travel points for future exploration. Sneaking around monsters and finding alternate paths is fundamental to gameplay, as the world is populated from very early on by things far larger, nastier, and higher level than you. Avoiding stuff to get around it is something the game doesn't teach well, but you'll get the knack of it soon enough.

Everything in the game aside from one building interior (your customizable HQ) is seamless. If you want, you can travel from one place to another without ever seeing a loading screen - though you'll often see a short one from fast traveling. Never more than a minute, though. There are some downloadable data packs to speed play if you own a physical disk version, and I do not recommend playing without them as the game is significantly slower. You will see some weirdness with textures. There's no true texture pop to speak of because the game uses texture fades, staging increasingly more detailed models as you get close. In practice, that means sometimes you hit a really detailed area before the game loads it and a truck suddenly goes from blobby to pretty. If you rapidly approach an area deep in the late game - such as by suddenly descending from the sky - enemies will often appear after you've arrived. They won't attack you before they're visible. It didn't annoy me.

Navigating the big world is handled more than adequately, with a decent minimap, the ability to launch an overhead camera, and a followable quest guide, but the real jewel is the big map on the Gamepad's screen. You use this to manage your probe network, fast travel, find mission locations, and keep track of which map segments you've found everything in. It can get crowded later on, but it's hard to complain about so useful a tool with so much information in it. 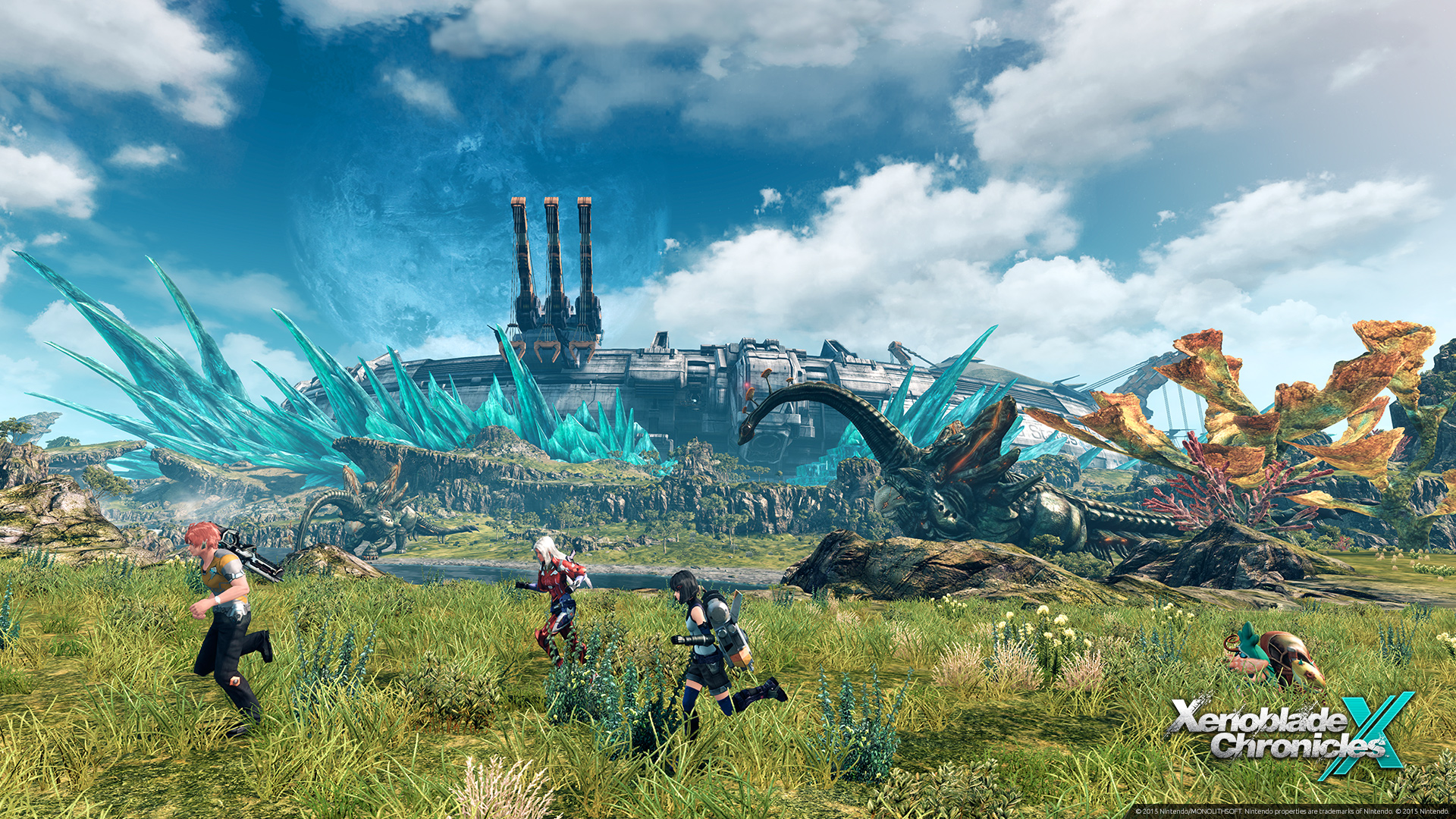 Xenoblade X subverts the empty collection gameplay of other open world titles have by making item pickups a floating blue gem - an old-school abstraction you won't mind in the least. It's far more respectful of your time than opening every container and looting every corpse. More detailed interactions - "treasure chests" - are as simple as tapping a button repeatedly to download data, loot wreckage, or install a probe. Treasure is complicated by an utterly unnecessary "skill system" that really just gates off content you've already worked to find. It sucks to painstakingly climb a mountain only to find out that you actually need Mechanical 5 to install that probe or scavenge that wreck, thank you very much. (Raise Mechanical first. You need it most - trust me!)

There's a few drawbacks to the world's size and organization, though. For all that it's packed with life and places to go, it can feel robotic. It doesn't change very often, even in response to major plot events - after a base is attacked during a later chapter, it just adds a few new pieces of wreckage to scavenge and all the battle damage vanishes in a loading screen. New NPCs, missions, and tips appear and disappear with some regularity, and new types of people show up. You can do quest chains that will surprise you by adding a new store or feature to the city. Just don't go into this expecting a big base-building and expansion element.

Where it really rubs you is when you find a bit of the story before the game gives you the mission for it. About six hours into the game I found a piece of the lifehold. We won't get into what that is, but it's of incredible, fate-of-humanity-determining importance. Then at about 20 hours I found another. Then at 32 and 50 hours respectively the game acknowledged these by telling me all about them, how they were so important, how someone (not me) had found them, and we needed to recover them as soon as possible.

For all the flaws with your character's role in the story, characters themselves generally have interesting, unique design, and player-controlled characters have a range of customization. You have a standard range of customization options for yourself, though not to the level of obsessive detail often seen in modern RPGs. The majority of customization is in how you equip your character. In addition to whatever gear you're getting the statistical benefits of, you can also equip a set of 'fashion gear' that only changes your outward appearance. If you find some armor you like, you can keep the look once it's obsolete.

The game's gear ranges from casual tank tops or turtlenecks to cyberpunk-looking carapace armor and alien force field outfits. It's a scattershot of hit and miss designs, with some armor having far too much detail: An over-the-top sci-fi flair crowded with straps, spikes, plates, or curves. If you don't mind your fashion gear you'll end up with a mess of disparate parts that make you look ridiculous.

Character and gear design occasionally veers so far away from the believable, or is so sloppily composed, that it does genuine disservice to otherwise interesting characters. I recall one specific set of armor, a thick tactical vest with armored plates that has a gaping slash across the middle to expose the wearer's belly button and abs. I once burst out laughing because not until a cutscene started did I realize that my new super-heavy armor was a set of robotic cat ears. That's not to say the combat high heels, shoulder spikes, and battle bikinis are wholly bad - some of them are clever and thematic. The cleverest character designs even do some world building: Since there's a game conceit that heavy armor with more mass makes you vulnerable to gravity weapons, a light, strappy array of shield generators and deflectors that don't weigh the wearer down in laser-sword melee makes since. The worst gear and designs are just obnoxiously derivative though. The space-dominatrix thong armor or techno-gibberish power armor on an enemy is fun the first time, laughable the second, annoying the third, and just takes you right out of the story after that. Given the varied designs on so many characters, it's annoying to see near every lady villain dressing in the same black straps.