Developed by CAVE Interactive and published by Dedica. Released on November 12, 2015. Available on PC. Review code provided by publisher.

I was a man once. I spoke like a human being, had hopes, dreams, aspirations, and goals. I had feelings, could express anger and happiness, and had pangs of hunger and thirst. Once upon a time, I was normal.

Then, I played Mushihimesama, and my life was forever changed. At first, it seemed to be a charming arcade port, with colorful menus offering a good range of customizable options, switchable backgrounds to accompany the vertical orientation of the game, different versions of the original Mushihimesama, and different play modes like arcade play, or time attack. 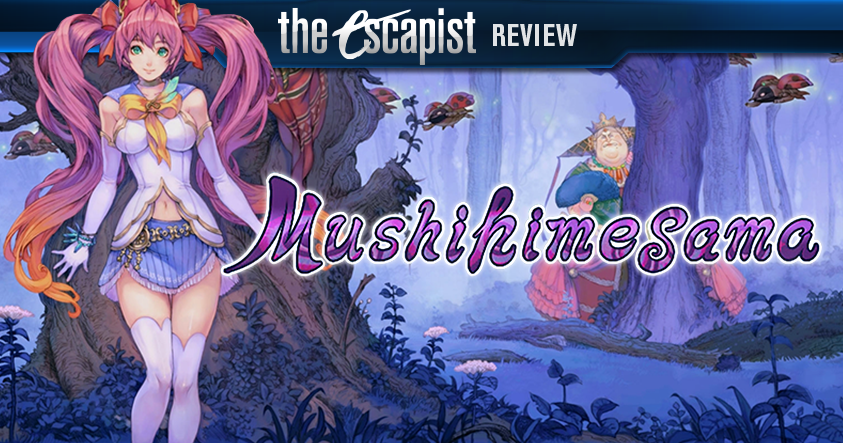 Getting into the game for the first time, I was given the option of several different weapon options, though their nuances and differences weren't terribly apparent at first glance. The first was the most basic spread, the second was wider but slowed my ship down, and the third was easily the tightest and didn't hamper the ship's speed. It was also my favorite, but it took me several runs to figure that out.

The beginning wasn't too bad. Bugs flew in from the top and upper sides of the screen, they would fire large, splotchy purple bullets, and I returned fire. Simple enough. However, without much preamble, the number of enemies and bullets on-screen rapidly multiplied, painting thick lines across the screen in purple. Easing off the trigger made the ship fly significantly faster, but holding down fire made my movements incredibly precise. Lancing myself out of the way helped for last second dives for cover, but if the fire ever hemmed me in, the shooting helped make my movements perfect enough to squeak just between bullets - keeping my insect's single, tiny vulnerable spot safe. I discovered that bombs cleared the screen of bullets, giving me a panic option if I'd backed myself into a corner or gotten too wrapped up in enemy fire.

As I learned and internalized these things, my runs became fractionally more successful. I would understand that bigger movements weren't necessarily better, and that guiding the sea of bullets by flying in certain areas when the enemies fired made the incoming fire more manageable. My strategies improved. I found myself in fewer, tighter positions, and eventually I managed the entire first stage in a single continue. With the right mindset, the game's quirks became tools for me to employ, and they made the endless surge of rounds less terrifying.

When bullets and explosions filled the screen, the whole world slowed down. Time slowed to a crawl, extending the fractions of second between the waves of purple. The time warp lasts only as long as the game's engine struggled to keep track of everything, so the slowdown comes in unreliable fits and starts, occasionally leading to a sudden rush of purple followed by more bullet time. These moments weren't often, but were predictable with enough repeat runs, and practice made them familiar.

By inches, I was growing a tunnel vision. The beautiful sprites and lush backgrounds were disappearing from my focus, and the excellent music faded into an early alert system for incoming minibosses and bosses. I was losing myself in the sea of purple. Substituting parts of myself for that single pixel of vulnerability. The patterns of gunfire were beautifully choreographed and graceful across the screen. It was as majestic and threatening as standing inside of a firework, and I became a part of that slow and terrifying dance.

When it worked, living inside the explosion was utterly decadent. There was a sheer, unbridled sense of artistry and jubilance hidden between the micrometers of life and death. I saw only the purples that sought to end me and the beautiful sky blue that was me.

When it didn't work, it was heart-shattering. A cry of regret followed by the judgmental ticking of the continue screen. It was a humbling moment to face the realization that no matter how close, all it took was a pixel's width to end an otherwise good run.

Mushihimesama taught me that there is way more calculating, shrewd, cautious consideration in that one pixel than many other games have put into their entire campaigns. For that, it has changed the way I view myself and my ability to thrive in terrifying environments. I'm different now. Different in a way that's hard to describe without artsy metaphors of automation, uncanny precision, and the artistry of explosions.

All the same, Mushihimesama manages to slip these feelings into a bite-sized, five-stage arcade game that defies all reasonable sense of difficulty and throws caution to the wind while throwing its weight in bullets at the player. It's an exciting experience to survive, even if you're never truly threatened.

One caveat is how unapologetically difficult the game is to understand. You can't simply pick it up and expect to master it. The menus are consistent, but unclear, and take fiddling to really make much sense of. The 1 key will allow the player to continue after losing their three lives... although this isn't shown anywhere in the game's menus or control schemes. The bullet time can be profoundly useful for the harder patterns of fire, but can't be relied on because of how irregularly the speed changes happen. To really understand the game, the player will inevitably have to put in some practice.

In the end, it feels a little difficult to have a fully nuanced opinion of Mushihimesama. The menus and arcane names like "Original," "Arrange," and "v1.5" don't really explain their differences, nor do the "Original," "Maniac," or "Ultra" difficulties. The game's quirks are familiar and comforting for fans coming in from the arcade and Xbox release, but alienating for new players and casual onlookers. The story comes all at once, with no explanation, and ends just as quickly. It's all very strange at first, and takes time to open up, but once it does there's a weird charm that will open you up in turn. It'll reveal a hidden perspective in play.

Bottom Line: A beautiful, charming, humbling, and difficult experience that's a good fit for shoot 'em up fans, but perhaps strange and unwelcoming to newcomers.

Recommendation: An absolute must-play for genre fans, but polished and balanced enough for a wide range of players. The impatient should avoid Mushihimesama, since it requires trial and error to make full sense of all the options, mechanics, and surmount the incredible difficulty.

Note: Reviewed version included the v1.5 DLC, which mixes aspects of original arcade mode and arranged versions. Some review notes made with v1.5 in mind, and may not apply for original or arranged modes.