Downwell is a game where you fly using the recoil of guns strapped to your legs.

That's it. Review's over. Go buy it now.

But if the sheer awesomeness of hover gun-boots doesn't sell you on the game, maybe Downwell's interesting melding of genres will instead. 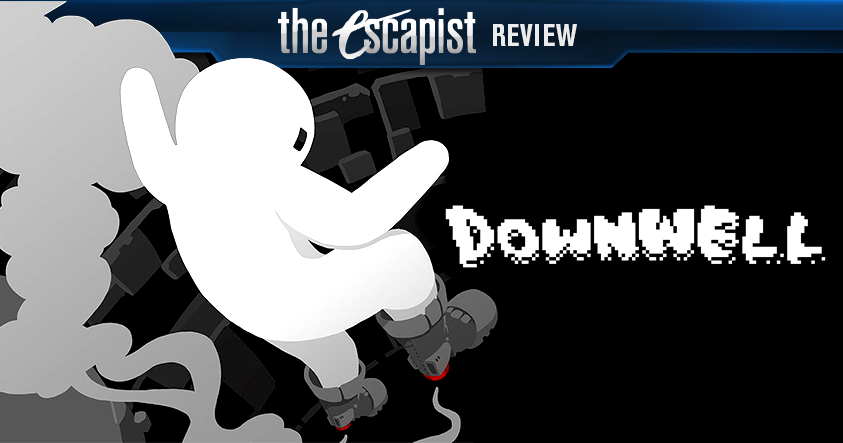 Downwell is a surprisingly successful marriage of the roguelike, platformer, and shoot 'em up genres. You play as a pixelated protagonist who is trying to get down to the bottom of a well. Get it? Unfortunately there are a lot of obstacles preventing his fall to the bottom, from rock outcroppings and spikes, to slimes, ghosts, and cthuloid horrors.

The game takes place entirely in freefall, with only sporadic platforms of solid ground to stop your descent. You can jump, like any other platforming character, as long as your feet are on solid ground. This allows you to avoid enemies and even make some progress back up the well if you want to. You can fire your aforementioned gun-boots to slow your descent and hover for a while, or to attack the enemies you encounter along the way. Some enemies can also be defeated by falling on top of them in traditional Mario style, while others will damage you if you touch them, or even throw projectiles at you. You'll want to be frugal with your ammo, as it doesn't refill until you touch solid ground or bounce off an enemy, and spending it all leaves you defenseless.

At the same time you want to avoid touching solid ground as much as possible, because every kill you get before you land adds to your combo counter. Rack up enough kills and you'll earn gems, which you can spend on ammo and health upgrades at the shop, or you may even simply receive the upgrades for free if your combo was long enough. Getting enough gems puts you in a "gem high" state, where you do more damage and have larger recoil from your shots, which further allows you to control your descent.

Along the way you will find time bubbles at the mouths of caves in the side of the well. Entering one of these time bubbles freezes the entire game, including enemies, your gem high, and your combo status, allowing you to touch the ground without losing your combo. Inside these caves are gem piles, stores, or health and ammo upgrades attached to a new type of gun. The catch is, you can't pick up the upgrade without picking up the gun as well. So if you have been relying on the rapid fire machine gun to fall slowly and get large combos, you'll have an interesting choice to make if you find a max ammo upgrade attached to a single-shot shotgun. Then, when you exit the cave, you can jump out of the bubble, continue your free fall, and keep your combo growing.

There is a huge variety of guns to play around with. You start with a fairly basic pistol, but can upgrade to spread shots, burst shots, the aforementioned shot guns and machine guns, megabuster style "puncher" shots, the wild spray and pray "noppy" gun and even piercing lasers. Each gun takes a certain amount of ammo per shot and has its own amount of recoil. So early on, the laser may not be a great weapon for you as firing it once will deplete all your ammo and leave you helpless. But once you have several ammo upgrades and can fire the laser several more times, it becomes one of the best weapons in the game.

Added to the gun variety are 20 different character upgrades to collect, which do everything from giving you an attack drone to making your shots fire upwards. You get to choose one upgrade each time you beat a section of the well, and your selection is randomized. These upgrades also interact with guns in interesting ways. The drone, for example, fires one bullet every time you fire a bullet. Paired with the machine gun it doubles your firepower, but paired with the laser or shotgun it barely does anything at all.

And then, on top of everything else, you also unlock "styles" by leveling up as you play the game. These styles do things like, give you extra HP in exchange for falling faster and giving you fewer character upgrades to choose from, or make it so that you only find gun upgrades in time bubbles.

But this is where the roguelike elements of the game comes in. You only have one life to live, one life to get to the bottom of the well. If you die, you lose everything, health and ammo upgrades, character upgrades, guns, gems, everything except your level and styles. The well is randomly generated giving you new layouts of enemies, upgrades, and shops every time. The typical roguelike challenges are present here. One run you may get upgrades that don't work well together at all. The next run, you might be a tank of destruction by the second level. It's all random and that randomness is half the fun.

There's one last thing I feel I have to mention about Downwell and that's its price. Downwell costs $3. Yes, three whole dollars. If you get it on a Steam sale (like I did) you can get it as cheap as one dollar. I've already spent over 20 hours on Downwell and I plan to spend much more. That's a huge return for a small expenditure. You could buy two copies for the price of a Big Mac! While the random nature of Downwell can be frustrating at times, the depth of play styles and upgrades along with the interesting game format and low price makes it hard for me to not suggest Downwell to everyone.

Bottom Line: Downwell is an unique take on the shoot em' up and roguelike genres that is sure to keep you coming back.

Recommendation: Fans of roguelikes, shooters, platformers, or really anyone with three dollars to spare will love this game.