Ships are held together by duct tape, cheap wire, rust, and prayers. Resources far from the core planets are scarce and hard won, and every drop of precious water is fought for by finance or firearm, leaving little room for diplomacy. The dusty edges of space present few options for honest bots, and too many for opportunists, gangs, and bandits. It's a setting rife for conflict and struggle, and the sort of place a cobbled together crew of misfits can find enough work to keep afloat. It's a steampunk science fiction story heavily inflected with the western flavor of Firefly. 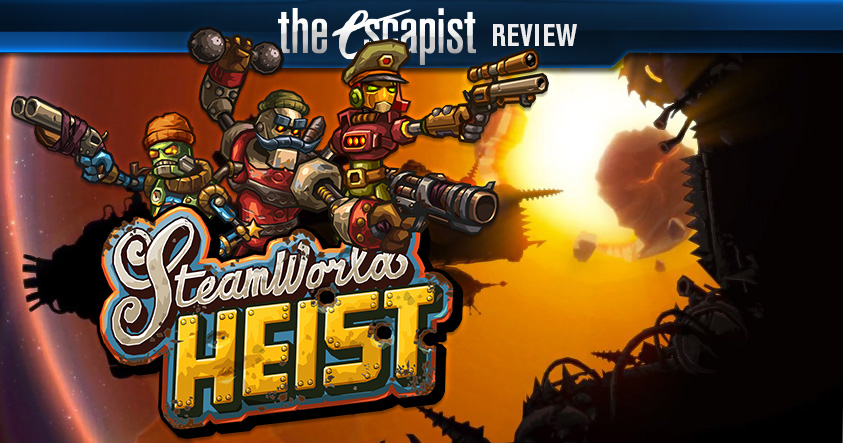 Steamworld Heist follows the smuggler crew of captain Piper Faraday, drifting through space looking for work and resources enough to keep flying. Over the course of her smuggling years, Piper has developed a reputation with the locals, who view her band as pirates, which comes back to bite her when a group of erratic bandits known as the Scrappers manage to catch her off-guard and scrap most of her crew. Working with just a skeleton crew, Piper has to find a way to get back to the settlers' good graces and find a way to bolster back to size and find a way to stem the growing tide of the erratic and staunchly violent Scrappers. It's a hard life, and a hard game.

When the punishment abates, though, the missions work. The turn-based strategy elements combine well with the side-scrolling line-of-sight shooting. Weapons have different firing properties, or perks like laser sights that show ricochets, arcing trajectories, or explosives built in. Different crew members have different weapon aptitudes, so picking different crews at different times means there's a wider variety of strategies and combat styles available with just the quick swap of a crew member or two between missions.

Piper and her ragamuffin crew regain their reputation by boarding Scrapper vessels, reducing the brandits to rubble, and pocketing any water and plunder before taking an escape pod back to safety. These missions are scored out of a number of stars, which are gained by completing objectives and lost by losing crew members. Once a number of stars are earned, new regions or pathways will unlock, opening new doors to lobbies, side missions, and shops to trade gallons of pilfered water for equipment, weapons, and upgrades.

Between missions, Piper's ship is navigable, which affords the captain the opportunity to chat with her crew and hear their perspectives. In addition to Piper's ship, the rest of the universe and its robotic inhabitants look worn down, weathered through years of hard living. Further, the characters all feel put together piecemeal, never quite solidly assembled, as if they're never more than a few tentative moments from falling apart. There's a sense of desperation out in the reaches that translates in every ship, structure, scrap, and skirmish.

For such a rough, dirty, and dangerous setting, the space outside the viewports is beautiful and the crew moods are cheery, making the whole experience feel jovial despite the darker subject matters at play. The banter and personality shines through at every available opportunity, giving the entire experience a sense of roguish energy that never overstays its welcome. The adversity doesn't seem to stick. The good humor never abates, despite the gritty ships, dusty catwalks, industrial lights, and unpolished bulk.

Missions feel much less lighthearted, more immediately dangerous. Each ship is procedurally generated for the mission, cobbling together multiple levels, doors, enemies, obstructions, and sightlines for the Piper and company to carefully tread through during excursions into Scrapper ships. The crew sets their tools for the away mission, and must complete the primary mission objective before the escape pod opens up. Most missions amount to collecting all of the items scattered about the enemy ship, with the additional option of killing every enemy on the field for the bonus reputation. The crew and Scrappers take turns, maneuvering for better firing angles and shooting, until all parties are cut down or Piper can assemble her crew at the escape pod.

Your troops have limited health, and maps have inconsistent cover, so every mission is an opportunity to go horribly wrong. Piper and crew are allowed a limited movement each turn in addition to shooting, or an extended movement at the expense of the action phase, but situations change a little too suddenly for strategies not to come apart. The random generation is sometimes a little too generous when positioning enemies, or just aggressively unkind for all parties, and it leaves the first party to put enough lead down-range to walk away with the fewest fatalities. With no restart system for missions and the loss of water on death for most difficulty settings, failed skirmishes would be better off written off without a way to. 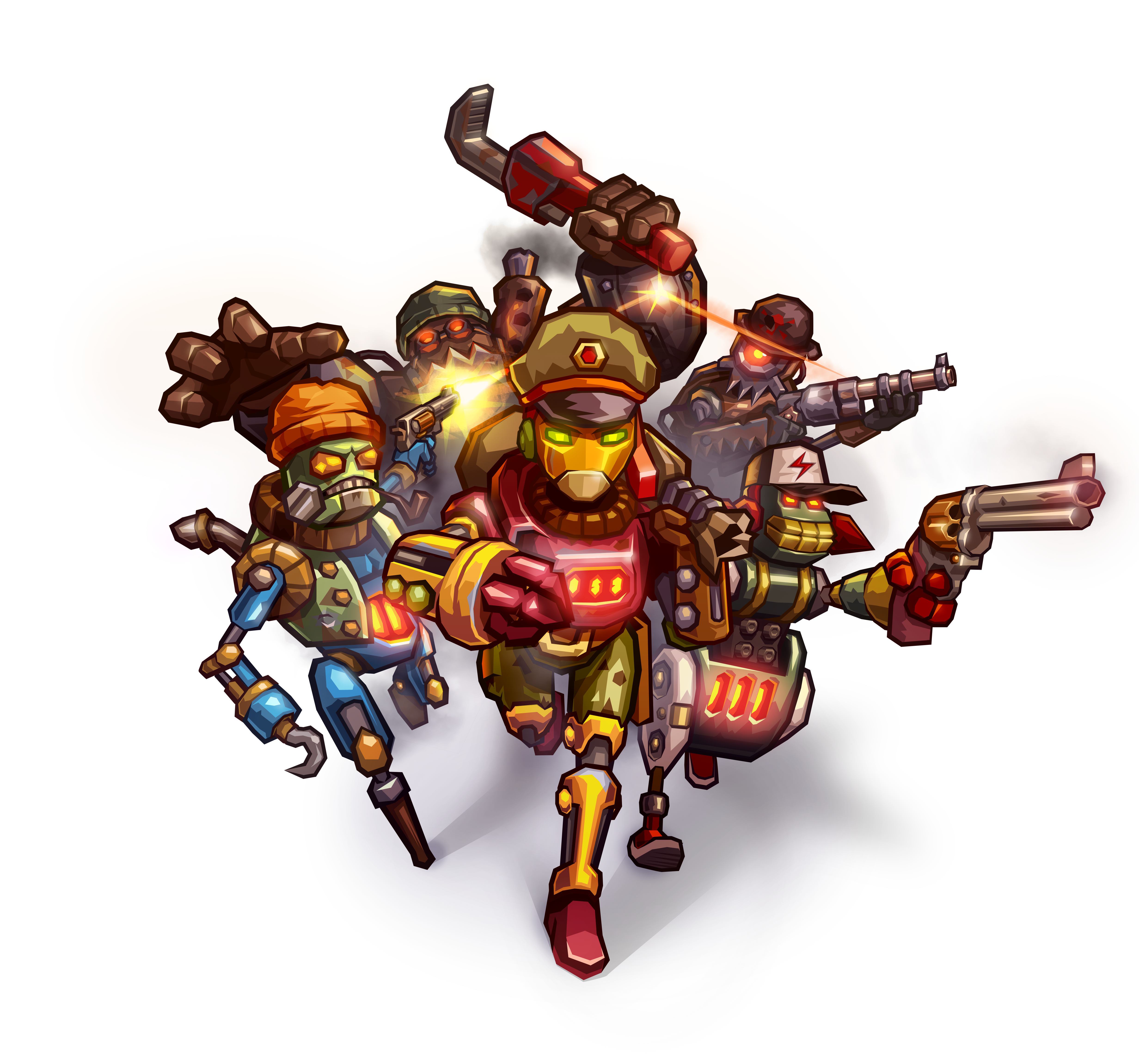 Unfortunately, the true variety of the crew options is difficult to experience, as the player's inventory is restrictively small and very expensive to upgrade. The first several hours, at least, will be rife with lots of inventory juggling and careful resource management while the player finds their feet with limited space. Even after being equipped, weapons and accessories are stored in the inventory, and a well-stocked party will rapidly overflow, leading to the need to sell items on a regular basis to keep a good set of equipment for your primary crew. Despite the items, crew members only gain experience when brought to missions, meaning party members that die or attend too few missions get left behind.

It's hard to dwell on the negatives without feeling uncharitable and petty. The game is simply too charming. Piper, Seabrass, and Wonky are all fine characters, as are the settlers, mercenaries, and crewmen Piper meets and picks up along the way. Ships crash together with big, screen-shaking thunks. Alarms blare overhead. Flavor text briefly but descriptively paint great pictures of the general sensation of being a group of opportunists out in the rough. Even though the whole experience is a bunch robots living in stereotypical western facades, everything is affable. The space itself is decadent in style and aesthetic.

Taken in parts, Steamworld Heist is an atmospheric journey through the rough edges. Despite the worst of what's out there, it always feels warm. Fans of Firefly will find the tone of it all very familiar, and rightfully so, as the entire sensation of being a plucky crew out in the void is oddly warming. Taken as a whole though, Steamworld Heist feels a little too technical to be as charming as its best parts. The missions work well enough most of the time, but really stall when they don't. The same turn-based, side-scrolling shooting has been done in better spaces and is more polished elsewhere.

Even fans of Steamworld Dig might find the departure to turn-base strategy to be a strange choice.

Bottom Line: Steamworld Heist is an absorbing world wrapped around a decent game whose technical bits take away from a stellar personality.

Recommendation: Fans of a good space western, or who enjoy a fairly challenging strategy game, will find something to like here. That said, Heist is a pretty big departure from Dig, so series fans may want to consider carefully if an occasionally frustrating strategy game is their cup of tea.