Developed by Nihon Falcom and published by XSEED Games. Releasing on December 22, 2015. Available on PlayStation Vita and PlayStation 3. Review code provided by publisher.

There is precious little time to come to terms with the game before it surrounds you. The game opens in battle, with hulking tanks and infantry fighting what appears to be a hopeless battle. Towering walls of the fortress back the combatants, who fire on an enemy the camera never sees. Inside, a group of high school age men and women storm the fortress, receiving instructions from two nearby adults. They are reminded that this is no simple school exercise, and that they are in an active battlefield, and should behave accordingly. What that means, or how that differs from what they might expect goes unexplained.

From there, they're split into groups, and sent to prevent two weapons known as rail guns from being fired. Each group is tasked with preventing one of the cannons from being fired. They split apart into their respective groups, and charge into the steel walls of the military base. Around the students are a number of bloodied corpses, and at no point do any of the kids or adults address the death around them, aside from making note of strange details. None of the characters are named in dialog, aside from brief descriptors like "black-haired boy" or "female instructor," and no frame of reference is ever given.

Battle begins almost immediately, with mechanical creatures bearing down on the group of red-clad students. The battles themselves are absolutely overrun with different interlocking systems, and making heads or tails of the peculiarities of the options feels beyond reach with the game nudging the player straight into the deep end. 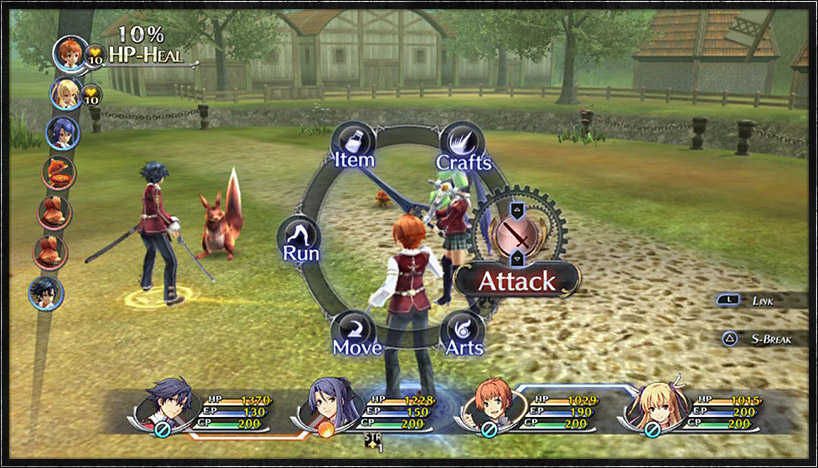 This prologue stretches for the first twenty minutes, before pulling back time and going over the events that lead to that point. Within those first twenty minutes, Trails of Cold Steel is a mess of a should be explanatory dialog but is actually just impenetrable world-building, the combat system is fully equipped but entirely unexplained, and the end of the prologue ends up leaving the game feeling a little too underthought. It's a tough twenty minutes to swallow.

Outside of a very rushed opening, Trails of Cold Steel becomes a better game. The prologue opens with the black-haired student from the prologue sitting on a train, taking in the passing countryside. He's on his way to Thors Military Academy, a prestigious university that trains students into capable military officers. The academy draws very vague lines between the commoners and the nobility, putting both social classes into the same classes with the same instructors. Throughout the Erebonian Empire, the nobility are split into major families that control a great deal of wealth and power, and it shows in the social dynamics of the students are the academy, as the students are segregated by uniform: green for commoner, white for nobility, and red for a special class of students.

The main character, a swordsman by the name of Rean Schwarzer, is a member of the special and brand new class of students, Class VII. After the opening ceremonies for his first year at the Academy, he is introduced to his classmates, and his peculiar role in Class VII, a group of students from both common and noble backgrounds who are field testing a brand new type of combat apparatus.

The intricacies of the Erebonian Empire come to light as Rean does his best to navigate the strict and difficult class schedule of the military academy, as well as dealing with the numerous field tests, assignments, and bizarre aspects of life in Class VII. The player's perspective joins in on occasional moments of school life, mostly in the weekends preceding field studies and the field studies themselves, as well as the missions that lead up to the same moment from the prologue. 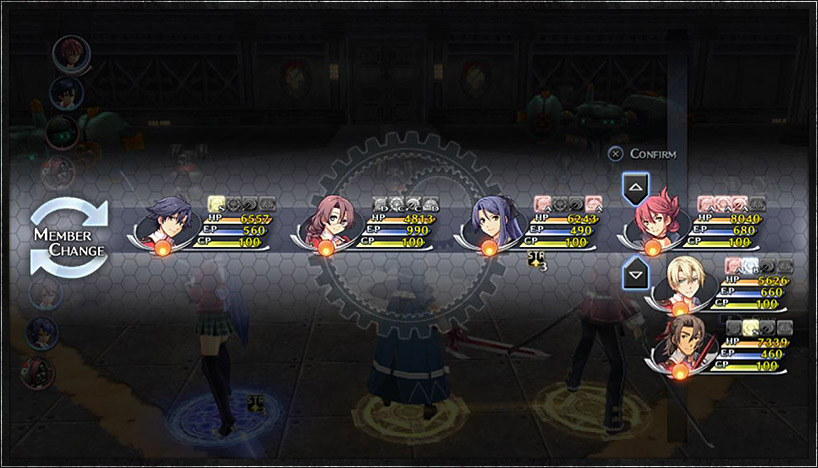 There is a lot of detail to fit into the world, and the time it takes to comb through it all is vast. With so much material to cover, the narrative plods forward slowly, through it never feels dragging so much as it's hard not to note the passing of hours for each chapter. Although it does some interesting things, like optional side quests, little moments to bond with the classmates of Class VII, and the passing of seasons between chapters, there isn't anything in the story that feels particularly standout. The bonding feels slightly less free and productive than similar systems, but the voice acting and careful details do a lot to make them endearing anyway. The story is very slowly meted out so it can scarcely hold onto drama or build a lot of momentum, but it's never bland. At worst, it feels a little bit familiar, a slow pace that will fit right at home in any other Japanese role playing game. At best, it's wonderfully acted, and a fun if slow experience.

The battle system, however, once fully unlocked and explained, does a lot to build on an existing RPG formula. Although the combat system is turn-based, there are a lot of interlocking systems that open up to a lot of strategy. The magic system is entirely customizable based on what gems are unlocked and equipped to each character, the skill system has the opportunity to inflict status ailments and move enemies and characters forward or backward in the turn order, and the link systems allow characters the chance to disrupt the battle structure when landing critical hits or give openings for finishing blows.

Along with the malleable turn order and highly customizable magic system, there are perks that attach to certain turns, and knocking enemies out of their place can open things like health, skill, or magic point regeneration, guaranteed critical hits, or no-cost magic. Although these things can't really be relied on in combat, especially when a battle is on the edge of failing, having them around to manipulate for easier battles or for the occasional lucky opportunities makes the battles feel a lot less rote, by-the-numbers than other, purely statistically turn-based combat systems would be.

In short, the combat system isn't as active as a series like Star Ocean, or as strategic as Grandia, nor the storyline as sociable and charming as Persona, but the whole experience has some of the great elements of all them brought together. The voice acting, mixed with the patient pacing of the narrative, makes the game enjoyable to sit with even if it isn't the sort of game that demands binge playing. The combat system isn't the most robust in the genre, but only just shy of being there.

The Legend of Heroes: Trails of Cold Steel comes across, then, as a strange chimera. It's not as perfect in any one of its systems as their closest competitors, but none of those competitors do everything Trails of Cold Steel does at the same time. It's a heavily polished experience, but one that feels just short of perfection given how much better each of its aspects has been done individually elsewhere.

Bottom Line: One of the best examples of how good the Japanese RPG can be, even if no single aspect sets the bar for the genre.

Recommendation: A polished experience that's a no-brainer for RPG fans, and could easily convert non-fans to the genre, with enough patience for a slow story and many hours to spend.