Life on planet Earth ain't what it used to be.

Twenty years after the events of XCOM: Enemy Unknown, genetically-modified soldiers police the streets, shape-shifting flesh creatures pose as your friends and neighbors, and nearly every world leader who once supported you has shaken hands with the enemy and succumbed to an alien-controlled world order. Heck, even Central's had to upgrade his pleated green pullover into some kind of combat-enhanced tactical sweater vest. Grim times, indeed.

This dark and dire world-on-its-knees approach is a perfect propeller for XCOM 2's thin yet efficient narrative which, much like its predecessor, serves the excellent gameplay instead of the other way around. The majority of missions are still some variant of "destroy/protect/escort/save the gizmo/widget/VIP/civilians". Yet unlike the loosely justified side quests of many RPGs, these encounters are so fun to play that the story rationalizations could be as thin as tin foil and still support the overall experience. 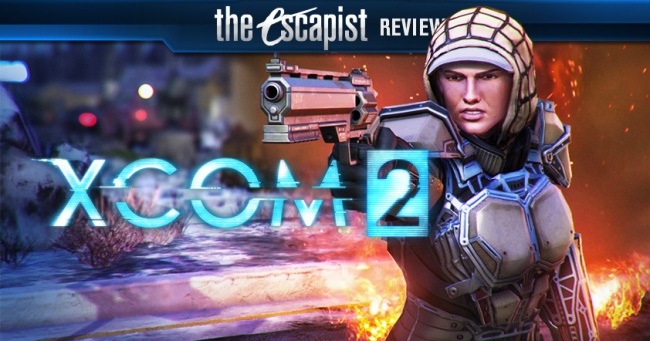 Your fresh command over the world's budding anti-alien resistance works mostly the same as it did in XCOM. The aliens are preparing something sinister, and you've got to effectively divide your time between the macro (base building, resource management, and political juggling) and the micro (personal oversight over every single bullet discharged on the field) if humanity will have a chance of survival. Both methodologies play against each other with a near perfect fluidity, offering a constant and relieving shakeup in gameplay whenever you need one.

It seems during their few decades in charge, the aliens have become pretty good at sniffing out gigantic underground facilities dedicated to wiping them out. In response, XCOM forces have gone mobile, taking to the skies in a rogue UFO retrofitted as a mobile base. While the whole "flying spaceship base" thing is an admittedly neat idea, it's largely aesthetic in practice. Zipping across the world map while you oversee the war effort is mechanically the same as sending Enemy Unknown's skyrangers to different territories. There are a few exceptions - such as some light tactical evasion to avoid enemy UFOs - but for the most part a lot of the fun lives solely in concept.

Having a mobile base does, however, give XCOM 2 a narrative excuse for improvements to game progression. Passing time is still a crucial component of your in-game actions - researching scientific advances, healing soldiers, and finding new missions isn't instantaneous. But instead of just clicking an all-encompassing "wait" button and seeing what happens, the effect of passing time is tied to your ship's location. Wait around in New India, and you'll dig up some much needed supplies. Kick it in the Arctic, and you'll unearth a new black market. Or, if you've got the communications bandwidth for it, you can hang out next to Australia and make contact with the local resistance.

As fun as just scooting around the globe and making tough decisions can be, effective command is more complicated. You'll have access to multiple "currencies", from supplies to intel, that must be managed simultaneously. Various items, alien corpses, and modifications fuel the game's crafting and trading systems. There's a communications value that governs your ability to reach untapped areas, and a power value that governs how many rooms can be run on your ship. Recruiting scientists helps your research speed, while engineers must be meticulously assigned and reassigned to open staff positions as your operation evolves. If it sounds complicated, that's because it is - and there are more than a few additional variables this paragraph has neglected. But however many times you scratch your head trying to remember how to find the currency-of-the-moment you're dangerously low on, the raw mass of variables is a design gamble that pays off.

It's almost a miracle these overlapping systems work as well and feel as strong as they do. The design team clearly took as much time fine-tuning the player's managerial responsibilities as it did combat skills and character progression. The result is a level of complexity that's robust but can be reasonably controlled, like a dumbbell you can juuust lift overhead, knowing you'd fall over backward if someone added so much as a pound to the bar.

This intricate balance brings a welcome layer of difficulty, but also promotes player agency in a way that's genuine and refreshing. It's become a sort of slogan du jour in gaming to claim a player's decisions "radically affect the world around them" but XCOM 2 earnestly succeeds where others fail in tying choices to legitimate change. Whether deciding which region to help (and by extension, which region to let get trounced by anthropomorphic space snakes) or which impending so-called "dark event" to foil, each choice follows the same devious three-step pattern: Which reward is better? Which consequence is worse? And which of those should I prioritize over the other?