Developed and published by The Molasses Flood. Released on Feb. 24, 2016. Available on PC (reviewed) and Xbox One. Review code provided by publisher.

My experience with survival simulator games is severely lacking. While Metal Gear Solid 3: Snake Eater and The Last of Us certainly had survival elements, they were mainly secondary features which didn't drive the gameplay. Enter The Flame in the Flood, an isometric survival and exploration sim that requires skill, persistence, and a little bit of luck in order to brave the flooded frontier of an abandoned America. 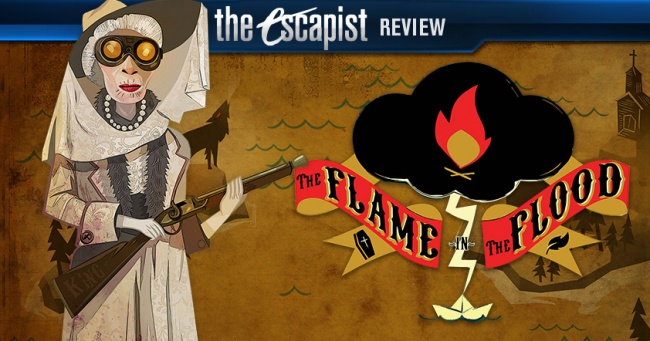 The Flame in the Flood puts you in control of a young woman stranded in the wilderness with nothing but a backpack, staff, raft, and her dog. The game world consists of a series of islands located along a river in an unspecified location in a postdiluvian America. You begin at a decrepit summer camp with one objective: Find higher ground so the radio can receive a better signal.

With this one instruction, it is up to you to find food, supplies, and shelter in order to survive. The moment you leave the first island, it is up to you to navigate your raft safely and manage your resources wisely. Outside of introducing you to new items and abilities, the game never holds your hand. This means that the islands you chose to explore will greatly shape the outcome of your adventure, for better or worse.

Surviving The Flame in the Flood is largely a game of dying and learning from your mistakes.The brutal difficulty is similar to Dark Souls, where death is expected. It is only through your inevitable demise that you can learn about the world and how to face it. Every playthrough will have different locations and randomized supplies, but the skills you develop over time will be the ultimate deciding factor in just how long and how far you can travel. Luckily, there is a beginner's mode for the campaign which allows you to boot up from checkpoints throughout the story. This allows you to maintain progress without having to start the story all the way from the beginning.

One of the drawbacks to the randomized world of The Flame in the Flood is that you can often get caught up in cycles of unwinnable situations. Through many of my sessions, I would spawn in areas that didn't have one certain item, such as spare wood, meaning that I couldn't cook food, make new medicine, nor gather charcoal for water filters. It becomes harder to search new islands as you get hungrier, more tired, or sicker because your character slows down. While I understand that this makes the game more difficult, a lot of the time, it didn't seem fair, as my death wasn't my fault so much as the engine's.

The Flame in the Flood is a roguelike, meaning that death matters in an important way. Neglecting health or any of the girl's other needs in the harder game mode will result in perma-death, requiring you to begin your journey anew from the first island. The survival mode is similar, but it focuses more on testing your ability to withstand the dangers of the wild and doesn't feature any of the story elements from the campaign. This mode can last anywhere from 15 minutes to several hours, depending on skill level. If there is an end, I do not know, as I eventually died from either starvation, wolf attacks, or a multitude of other ailments. Success is measured by how far you can travel and how many days you survive. Unless you're a master of this game, and incredibly lucky, you'll have a hard time surviving for long, meaning it's an ideal mode for anyone who doesn't have time to devote to long campaign sessions.