Into the Stars is a great game players will inevitably compare to FTL: Faster Than Light, and with good reason. Both offer a core experience rooted in interstellar travel, steadily advancing enemies, tense resource management, and making hard sacrifices for the greater good. Yet the differences between these games go farther than Into the Stars embracing the advanced graphics of Unreal Engine 4. 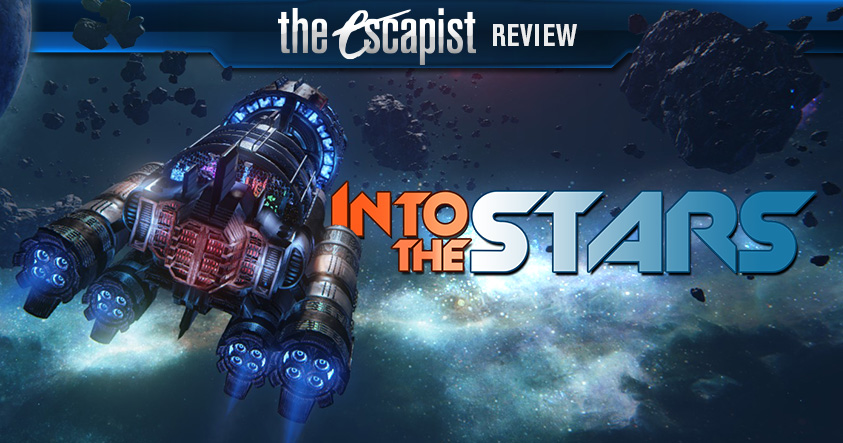 Do you wish FTL's space exploration didn't feel so rushed or random? Or that combat was more skill-based, instead of a question of who has the correct weapons and shields? Or that your journey across space didn't feel like a brutal exercise of micromanagement? Into the Stars is for players who love the idea of FTL, but wish something was just a little different, carving its own little niche while proving there's room for both experiences.

Into the Stars takes place in a distant sci-fi future. After a series of recurring alien invasions devastate Earth, humanity flees on Arks - giant spaceships designed to carry an entire city. You are the captain of Ark 13, with a mission to reach Titus Nova, the ideal habitable planet. But the Skorn are in pursuit, with a goal of finally wiping out humanity once and for all. And according to recent transmissions, Arks 1 to 12 are already lost - your ship is the last vestige of the human race. 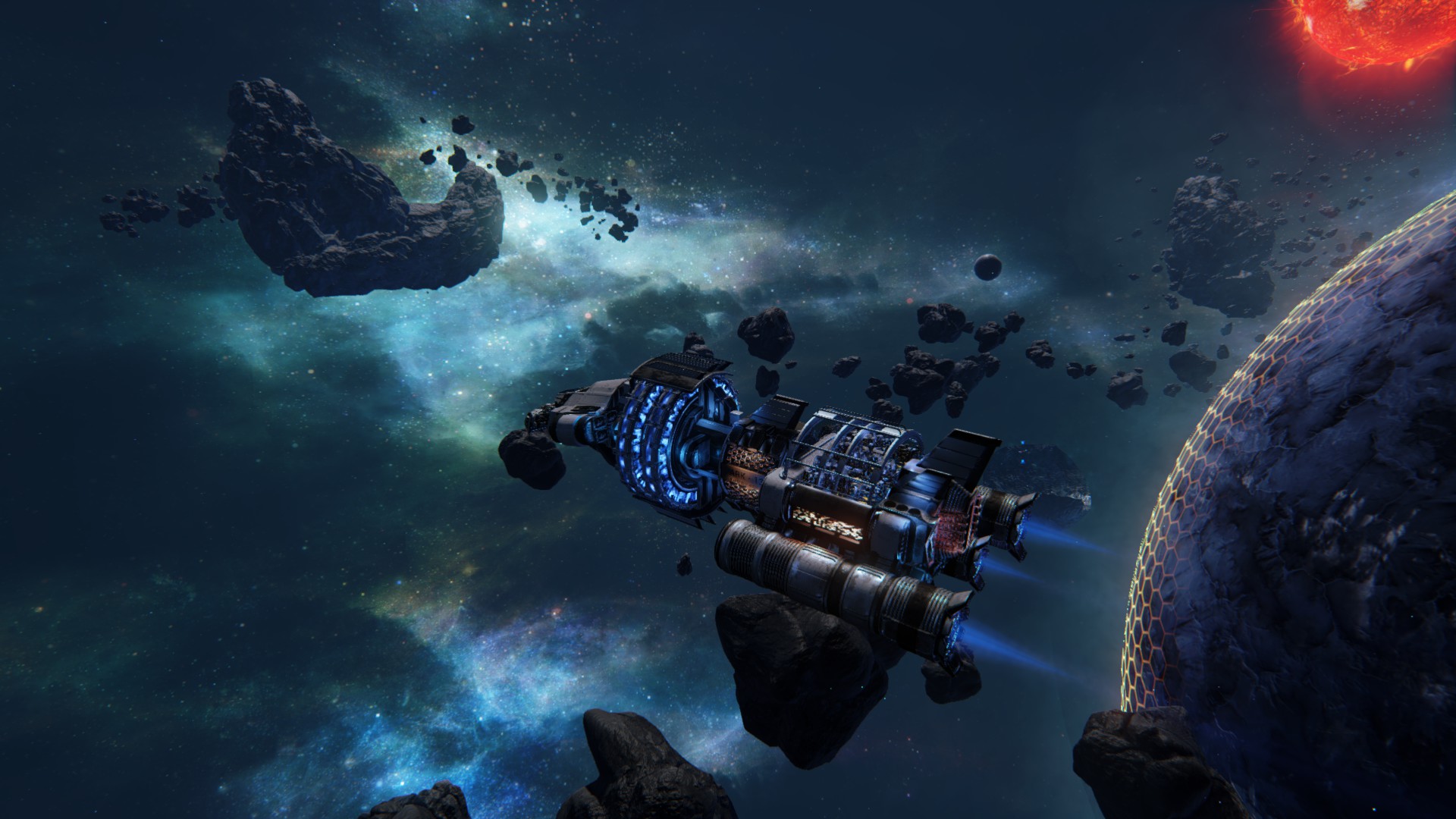 You start the game in Alpha Sector, while Titus Nova is located on the opposite edge of a 90-sector map. Your warp drive has been disabled in a recent, out-of-game encounter with the Skorn, meaning you'll have to rely on conventional drives to get there. Trouble is, you don't have enough fuel, food, or oxygen to make the trip and keep the 10,000 citizens of your city alive. That means you'll need to visit planets along the way and gather resources to continue the journey. The longer you stay in each sector however, the more likely the Skorn will be able to track your signal and warp craft directly to your location. What's more, some regions have higher alert ratings by default - forcing you to choose between plotting a safe course or making a risky journey through dangerous territory.

Into the Stars comes with a smoothly-designed interface which lets you control the action directly from the captain's chair. You can use an outer camera to look around the ship, but it's equally atmospheric to stick with the first-person view, monitoring ship statistics as well as the view screen. Instead of micromanaging each ship function, you'll assign important tasks to crew members as they arise. Crew members are randomly-generated with particular specialties, but you can choose any six from an extensive list and improve their abilities over time. Overall, it's a great hands-off approach which lets you focus on the big picture while keeping the tension of crew and resource management high.

Your biggest locations for resources are planets, which provide three avenues for obtaining them. The first is remote probes, which gather relatively small amounts of every useful element on the planet's surface. The second is mining operations, which requires sending two crew members to the surface, and lets the player control a drilling mini-game to earn more of a specific resource. Your final possibility is missions, where you assemble a full away team and choose between three potential quests. There are a huge range of procedurally-generated options here, ranging from exploring ruins, to diplomatic negotiations with aliens, to having your pilot take part in racing tournaments. If successful, these missions reward special items and repair kits which can't be obtained via standard resource gathering. The only downside? This isn't Star Trek - the captain will never be allowed to go on these exciting away missions with the crew. 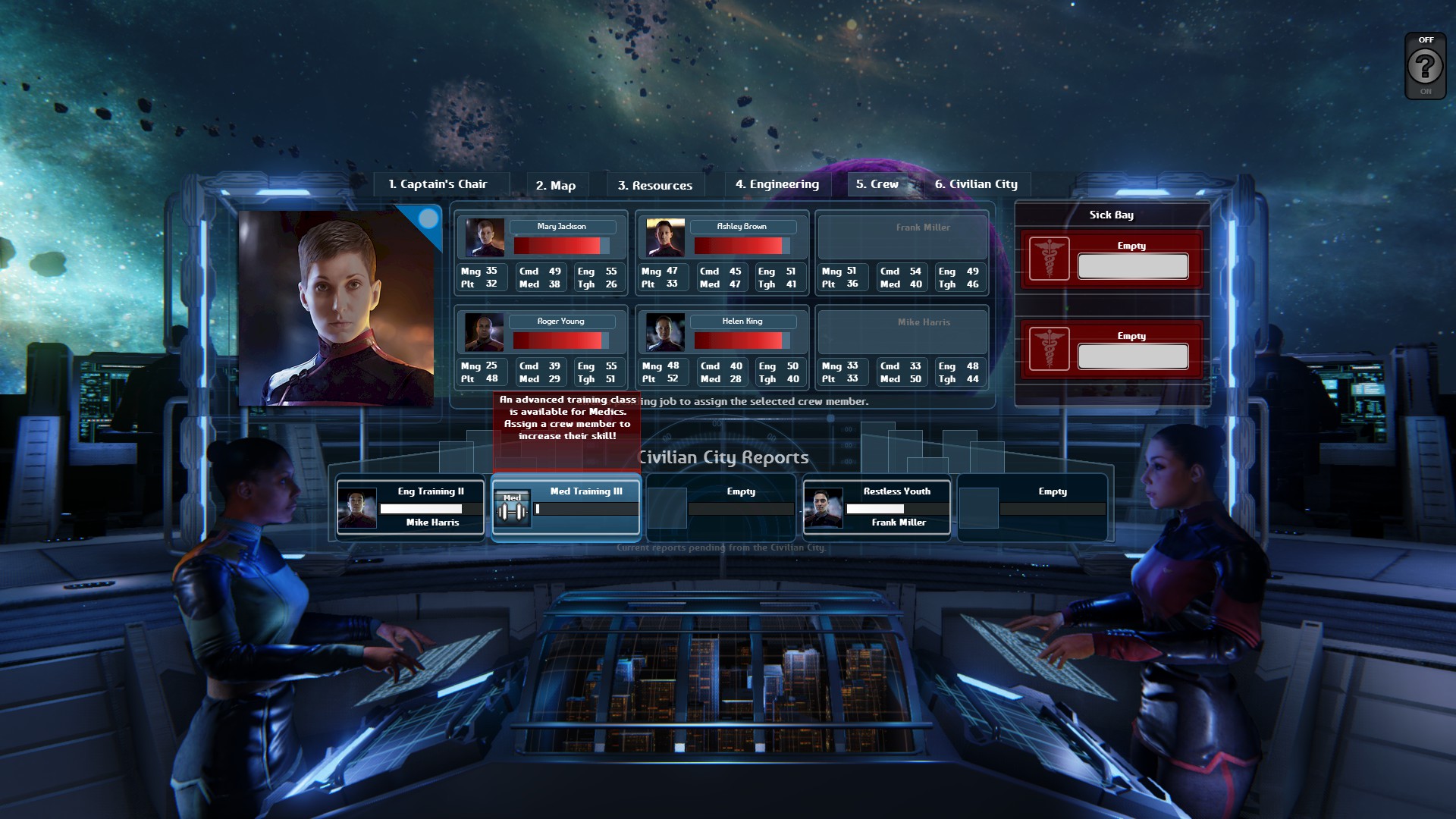 Outside of planets, there are also various ships you can encounter, such as alien traders, enemy patrols, or even abandoned Arks. There are also a few scattered stellar phenomenon like gas clouds which offer specific resources without the full range of mission options. You'll also need to account for your human city as you travel, assigning the crew to settle random events like disease outbreaks, gangs, or insurrections. If that gets tiring, you can assign construction projects which manage the Happiness, Health, and Order stats of your city for you. Mitigating the frequency of these events can be important, as it frees up your crew members for those big picture problems which no one else can complete.

Where possible, there are lots of options to avoid combat, from charting safe routes to spending the bare minimum of time in a space region. (Or if you prefer, there's an "Explorer" difficulty for anyone who wants to resource-gather without the strict time limit.) Which certainly isn't to say the space battles aren't satisfying. Weapons and shields operate on red, yellow, or blue frequencies, with identical colors cancelling each other out. That means you can activate a shield which completely negates an enemy attack, just as they can for your attacks. It's also possible to evade attacks if a pilot is assigned to the task, or mitigate crew damage if a medic is on-deck. Each ship action does have to charge before activation however, so you'll need to carefully time attacks, deflections, and evasions to survive with your ship and crew intact. It's a fairly simple, but satisfying set of mechanics, although it can get especially tense when juggling multiple enemy vessels at once.

One of Into the Stars biggest selling points is its Unreal Engine 4 graphics, which gorgeously renders each system and lets you travel between them without activating a warp drive. But for the most part, this is largely a visual distinction - unless you fly directly into a star or planet, there's not really a gameplay impact to traveling in space. All it really does is lend atmosphere - a fresh and palpable atmosphere, but not one which reflects the experience any more than FTL did.

In fact, despite the advanced graphics, Into the Stars gameplay feels simpler than FTL - which is a strength and a weakness. Into the Stars has no interest in ship layouts, assigning crew members to specific stations, or spending more than a few seconds on ship repairs. Instead it focuses entirely on the long game of resource collection and management, keeping other considerations in the background. FTL, for all its fascinating systems, had a tendency to push players towards combat at the expense of exploration and thoughtful resource management. Into the Stars strikes a balance between combat, exploration, and crew development, letting all playstyles impact the game equally. For a genre which acts like your decisions as captain should matter, that's an important distinction Into the Stars nails right away.

Bottom Line: Into the Stars is a gorgeously-rendered sibling of FTL, featuring all the tension of collecting resources and fighting space aliens with none of the tedious micromanagement.

Recommendation: If you enjoyed FTL, but wished it didn't emphasize combat above all else, you will love Into the Stars.