Black Desert Online may not have substantial outfitting, but the customizability offered by its character creator is second to none. You can design your character to look like literally anyone, provided you have the time and inclination to do so. I made a warrior who looks a little like Ron Swanson. Others have reproduced famous actors, characters from Lord of the Rings and Game of Thrones, and even Michael Jackson.

Another way Black Desert Online tries to differ from other games is through its combat system, which controls like a hack-and-slasher. Attacks are manually executed, taking movement, sprint and mouse buttons into context to perform different attacks--all of which are unlocked as you level up and earn skill points. Some of the moves can be executed by hitting the number keys, just like in a regular MMORPG, but it was easy for me to get the hang of the context-sensitive moves as I played.

In addition to the action-based combat, another improvement the game has over its rivals is traversal, which allows you to mantle over fences, scale walls, and climb onto the roofs of buildings. Moving around isn't restrictive or constrained and feels like a huge leap above what you might find elsewhere.

Despite its differences to existing games, Black Desert Online still has the familiar grind of killing monsters and completing quests that's as repetitive as it was in any other MMORPG. The experience is less demanding than tactical-oriented action games like Destiny and The Division, but it requires too much attention to provide the kind of meditative experience you might experience in a typical MMORPG with skill rotations. Monsters are next to mindless and simply stand around waiting for players to engage them or enter their radius. It's a step above the combat typically seen elsewhere, but it doesn't have the same fluid pace of the action games it draws inspiration from due to the lack of challenge. I steamrolled my way through most encounters.

Black Desert Online's quests are as boring as they come. Right from the start, you have to kill low-level monsters and perform fetch quests. None of these missions make me feel like I was playing anything more than a typical MMORPG. The game's more innovative features did little to raise my level of engagement with the story.

Still, combat and quests aren't the only activities the game has to offer. There's a complex trading and crafting system that makes up a big part of the endgame - provided you care enough about the game's economy to participate in it. You have to buy houses and workshops, staff them with workers, and manage resources, which you can use to craft materials used in the forging of powerful weapons and armor. If any of these elements sounds confusing, that's because they are. The game suffers from having too many complex systems, too poorly documented to offer an easy "in" for anyone unable to spend too much time just trying to figure out the basics. The UI alone is unintuitive. 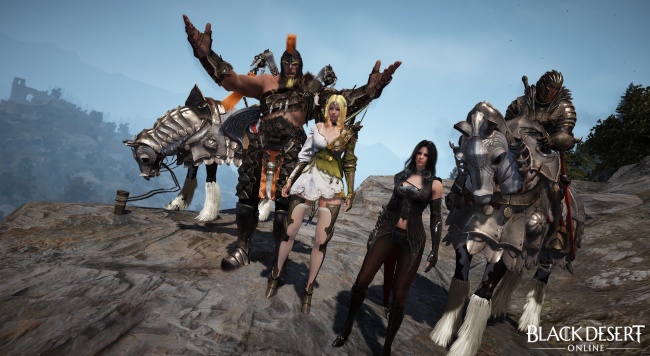 A lot of these elements are superfluous to anyone who just wants to have an adventure. I expect most gamers, like myself, will simply end up skipping these features unless they're absolutely intent on maximizing their time with the game. With so many other great games out on the market, it can be hard to justify spending the time required to make any headway into the game's trading and crafting systems without sacrificing playtime elsewhere.

Black Desert Online has a long way to go in terms of content if it wants to compete with the big dogs. It may well find a small niche of its own provided that the developers fix what's already there and truly put its strengths to good use. More challenging encounters, better quests, and gear that actually changes in appearance would go a long way towards making BDO the "next gen MMORPG" it wants to be.

Bottom Line: Black Desert Online wants to be distinct from other MMORPGs, but it isn't different enough in the ways which really matter. The game's few innovations aren't enough to make up for its myriad shortcomings, making it come across as just another MMORPG.

Recommendation: If you aren't already sick to death of the genre and have hundreds of hours to burn on its deeper systems, it's worth trying out. Otherwise, play a game that actually respects your time.