Developed by Ubisoft Massive. Published by Ubisoft. Released on March 8, 2016. Available on PlayStation 4, Xbox One, and PC. Review code provided by publisher.

Tom Clancy's The Division is a third person shooter/RPG hybrid with an experience that is transformative depending on whether you're playing solo or with a group of two or more friends. As a solo player, the game is a dull slog with repetitive cover based gunplay, limited character progression mechanics and combat that is marred with bullet spongey enemies. 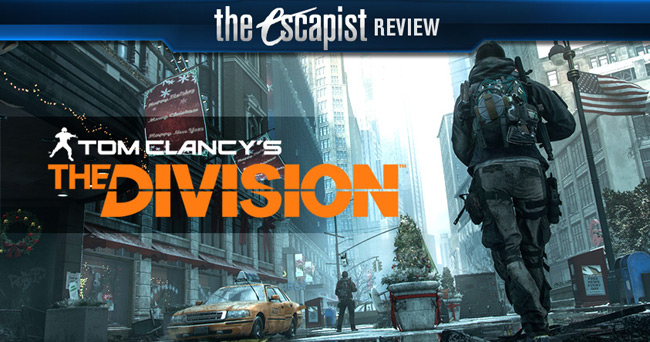 But a funny thing happens once you add even just one more player into the mix. The gameplay that was previously dull and uninspired now takes on a much more tactical feel; one that is actually in line with a game bearing the Tom Clancy name. Enemies that would typically take an eternity to take down can now be outflanked and focused upon, skills that would be absolutely useless in a solo setting now provide outstanding utility for the team, and gunfights that would otherwise feel like boring wars of attrition are now... well, they're fun. It's a game that is laser focused on a specific demographic of gamers, and if you fall within those crosshairs, you're going to have a great time. Everyone else, not so much.

Regardless of whether you're playing with or without friends, the story remains the same. The game takes place in a post apocalyptic New York City that has been ravaged not by zombies, aliens, or nuclear fallout, but by smallpox. A weaponized and more deadly version of the virus has been spread throughout the population through tainted dollar bills on Black Friday, eventually resulting in total chaos and anarchy in the streets.

Players take control of a member of The Division, a sleeper cell of highly trained agents put in place by our government to restore order once a catastrophe causes society to break down.

It's a solid premise, and one that feels refreshingly grounded in reality. Unfortunately, storytelling in The Division is an afterthought. The few cutscenes that exist take place almost entirely in the base of operations and mostly just consist of characters telling you where to go, who to shoot, who to rescue, and what to take from the scene. There's no character development, no banter, and nothing about any of the characters that makes them particularly likable or relatable. They're primarily just voices in your ear that you have to listen to in order to progress.

The meat of The Division's story is told through pieces of intel that are obtained after completing main story missions, which are broken up into medical, security, and technology missions. Completing a medical mission will net you a virus report that sheds some light on the virus's origins and the motive behind its release; completing a security mission shows you found footage of one of the various factions vying for control of the city; and completing a technology mission will unlock a piece of surveillance data that illuminates what happened to the first wave of Division agents.

The system is actually very intelligently balanced when playing in a squad.

While the surveillance camera videos tell a coherent and interconnected story that explain some of the mysteries in The Division's narrative, the rest of the intel files are so short and so rarely contain any pertinent information, that they hardly feel like a worthwhile reward for completing a mission. Rather than seeing footage of Cleaners and Rioters just murdering people, it would've been nice to get a little more background as to how these factions were formed and organized.

One of the very first tasks for players in The Division is to set up their Base of Operations, which serves as a home base where they can shop, craft, and upgrade their character. Like the story missions, the base is divided up into three wings: Medical, Security, and Technology. Completing missions and encounters of a specific type will reward the player with supplies that can be used at the corresponding wing to purchase an upgrade.

Each wing has a total of 10 upgrades, with each upgrade containing a collection of skills, talents, or passive perks. Skills are most likely going to be the main draw of any particular upgrade that includes them, as they are special abilities designed to give the player an edge in combat. There are nine normal skills in total -- three for each wing -- and each skill has three unlockable mods that add on an extra effect to the base skill. Eventually you'll be able to unlock signature skills, which grant an extremely powerful buff or ability, but are on a significantly longer cooldown.

This method of acquiring skills is unique in that it isn't tied to your level, and any of the nine standard skills can be obtained at anytime, as long as you have the supplies to afford them. This offers a great deal of customization early on, but it also has some substantial drawbacks.

For one, it causes level ups to feel completely meaningless. Leveling up in an RPG is supposed to feel like an exciting event where you learn new abilities that can potentially change the way you approach combat, but with no aspect of character progression tied to your character's level, leveling up in The Division feels like an empty achievement.

In addition, the skills themselves are just not that exciting. If there were classes in The Division, each of the nine standard skills feel like they would be a level one spell for a specific class. First aid is just an extra health pack that's on a timer, the sticky bomb is basically just another grenade that's on a timer, smart cover just lets you put buffs on a piece of cover, and pulse just highlights enemies for all players to see. Once you're 15+ hours in and still purchasing what feel like level one skills, it takes a lot of the excitement and motivation out of gaining supplies.

That being said, as weak as the skills are for the solo player, the system is actually very intelligently balanced when playing in a squad. Alone, none of the skills really pack a significant or satisfying punch, but when used in conjunction with each other, each skill is able to provide a useful bit of utility that goes a long way when it comes to taking down a tough boss and his army of bullet spongey elites. Having a dedicated healer removes the need to always have first aid mapped to one of your two skill slots, pulse becomes more valuable when its effect is applied to all squadmates, and smart cover actually becomes worthwhile when your whole squad can enjoy the benefits of the buffs applied to a piece of cover, rather than just you.