It's the dead of night. I'm aboard a creaky, poorly-lit ship. A man in the cargo hold clutches at his wounded flank. "We've been boarded," he warns me, as his assailant returns to finish the job.
Before I can react, a blade rends through my comrade's chest and is swung at me. I dodge the blow and avenge my fallen shipmate. But the rest of the crew isn't quite so fortunate. Their corpses line the passageways, and on the deck is a monstrosity that dispatches me with a single stroke. Sometime later, I awaken along a fog-shrouded shoreline and stumble into a sanctuary. 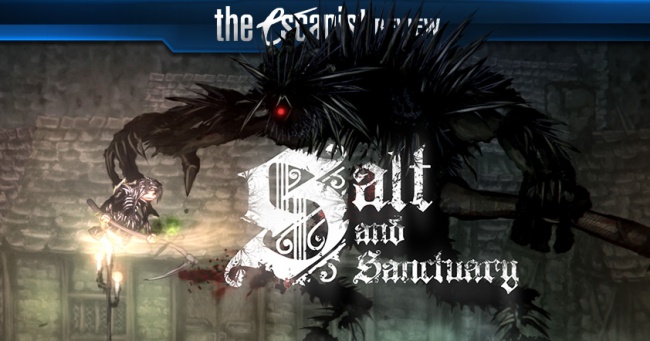 The opening of Salt & Sanctuary gave me deja vu. It felt like something out of a From Software game. And that is by no accident. From beginning to end, the experience evokes Demon's Souls and its successors. It's an homage that pits any player brazen enough to accept its challenge against long odds in a hostile environment teeming with unspeakable horrors.

Whether it's zombies, a hulking dragon, or the terrain itself, just about everything in the world of Salt & Sanctuary threatens the player's continued existence. Moreover, nothing tells you where to go, what to do, or how to do it. The developer, Ska Studios, invites us to explore and learn from our failures. It encourages us to take note of its intricacies: how enemies move, when they strike, what booby traps and other surprises lay in wait, at the ready to kill or maim us.

This process will eventually lead players to move from one sanctuary to the next, braving hordes of bloodthirsty creatures that dwell in forests, towers, caverns, and dungeons which stretch between places of respite. This difficult road is also punctuated by powerful foes and mighty bosses who are the gatekeepers to your progress. I often found myself crashing against them like waves beating a cliffside, slowly making progress by eroding the challenge before me. Sometimes I would need to become stronger, or rethink my strategy. Other times, I would need to become painfully intimate with my surroundings and fight with near-perfect execution.

This can be arduous, but the frustrations always seem to melt away when failure, at long last, gives way to success. The elation that comes from overcoming a boundary is proportional to how difficult it was to best. It's something that creates a feedback loop, impelling us to charge headlong into the next crucible, so we can be beat down and built up all over again.

That dysfunctional relationship is something fans of From Software's work know well by this point, and Ska Studios has mimicked the formula beautifully. It lives up to its billing as a blend of Castlevania and Dark Souls, presenting players with a complex web of environments that make wonderful use of verticality, interlocking and looping in on one another in fascinating ways. 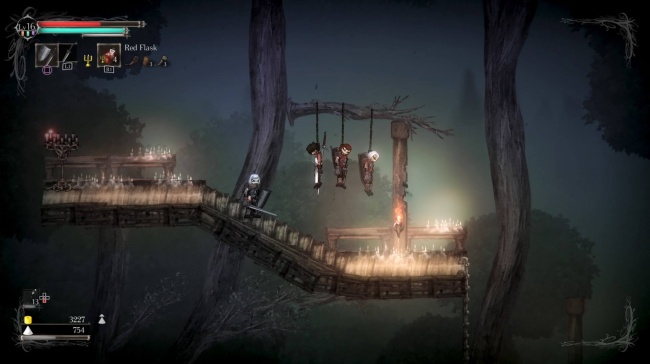 Throughout the journey, players will learn skills that allow them to traverse environments and reach areas that were previously unreachable. With the ability to wall jump and walk on ceilings, players travel to new destinations and unlock helpful shortcuts. These powers can also be used to explore familiar settings and enter places were previously inaccessible to find hidden loot and useful new trinkets that will reward your curiosity and help you on your way.

Those items can be incredibly beneficial, as players can always use and upgrade new gear to tailor their avatars more to their liking or the situation at hand. With hundreds of different weapons, spells, armor, and skills on offer, there are a myriad of ways to construct a character to better endure the harsh landscapes of Salt and Sanctuary, whether that means adding a ranged weapon to your arsenal or something more specific. For instance, I frequently used a blacksmith's apron to boost my damage resistance against certain enemies, like a fire-breathing dragon.

Another way to do that is to enlist the help of a friend. While the game doesn't include any online multiplayer options, save for some passive flourishes, like candelabras that can warn players about an impending boss encounter, it does sport local co-op, if you're ever in need of a helping hand. This option is enjoyable and easy use to use, but can also reduce the challenge, as players can choose characters that complement one another's strengths and weaknesses. And of course, Salt and Sanctuary also includes competitive multiplayer, so if you tire of slaying predictable foes, you can always test your combat skills and gear against human opponents.

Salt and Sanctuary will probably feel somewhat derivative if you've played a Souls game before. Everything from the sanctuaries, to the game over screens, to how experience points can be lost or regained are pulled straight out of From Software's playbook. But originality is overrated. Call it a clone if you wish, but this is one incredibly well-made clone from designers who understand not only what makes Souls games tick, but how to translate that type of experience into a different dimension and tie it together with a distinctive style.

Bottom Line: This is a brutal hybrid of Metroidvania and action RPG that will beat players down and have them coming back for more. Though it doesn't stray far from its inspiration, Salt and Sanctuary is a finely-crafted tribute to From Software's work and is absolutely dripping with the signature cartoon aesthetic and punk rock style fans of Ska Studios have come to know and love.

Recommendation: If you've ever wanted to play a 2D Dark Souls, this is your game.