Developed and published by CD Projekt Red. Released on May 31, 2016. Available on PC (reviewed), PS4, Xbox One. Review code provided by publisher.

"This could be The Witcher 4," I found myself thinking of Blood and Wine. Indeed, most developers would have probably packaged the expansion's 20+ hours of content into a full-priced sequel, but CD Projekt Red is not "most developers". The Poland-based team, which prides itself on DRM-free titles, customer first practices, and of course high-quality video games, has ensured that Geralt's last adventure is the proper sendoff the franchise deserves. Blood and Wine is such a refreshing example of DLC done right, in a world dominated by $5 hat microtransactions. 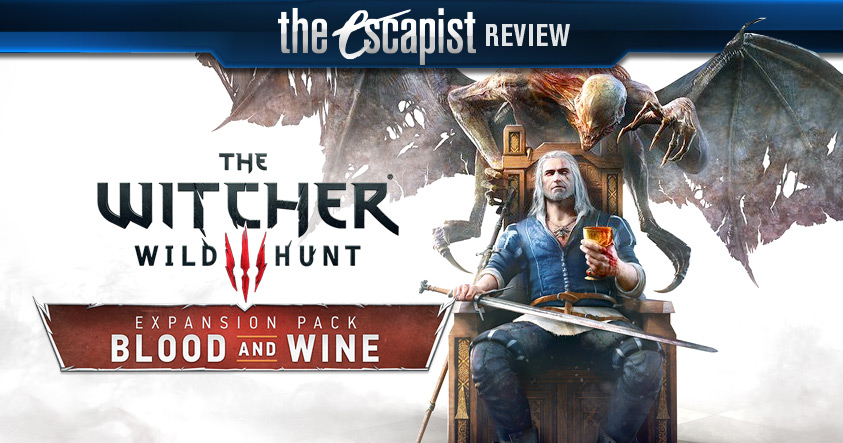 I hadn't booted up The Witcher 3 since I finished up with Hearts of Stone last year, and was pleasantly surprised to find it full of new goodies. Dozens of little quality-of-life changes were immediately made obvious. Inventory management has had a complete overhaul, as has crafting and the quick-access menu for potions/bombs/items. Quest tracking has been improved, alongside a mechanic that helps players track down missing cards from their Gwent collection. A graphical upgrade has made the game look shiner and more detailed than ever before. It's very clear that the developers have been actively listening to user feedback, implementing suggestions and fixes where necessary.

Blood and Wine recommends you be at least level 34 before starting it, but if you're not, no problemo! Just like in Hearts of Stone, there is an option to play "Blood and Wine Only", in which the game gives you a pre-made level 34 Geralt with a full set of gear. It's also built as a stand-alone adventure, meaning if you haven't finished Wild Hunt you can enjoy Blood and Wine without worrying about spoilers. 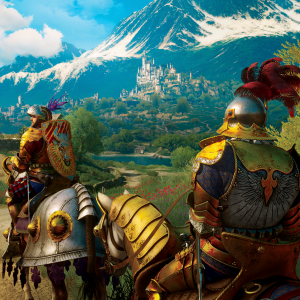 The short and skinny of it all is that the far-away land of Toussaint is having some problems with some sort of magical beast, so they've called on magical beast expert Geralt to come help out. He arrives and quickly deduces that the beast is actually a vampire (hence the "Blood") and is given his own private vineyard to act as his home base while he hunts it down (hence the "and Wine").

Toussaint itself is an absolutely gorgeous breath of fresh air. While Novigrad had that whole "rainy, dreary, medieval Europe" thing down pat, and Skellige really nailed the whole "frozen Viking islands" look, Toussaint is bursting with color, taking inspiration from the wine country of France and Italy. Its Duchess is a spunky young lass who isn't afraid to rip off her skirt and get her hands dirty, and the region is protected by an order of "holier-than-thou" knights taken straight out of King Arthur's realm. Blood and Wine's characters are bright and bubbly, and while there are a few "bad dudes" that are you to screw you over, and a few depressing stories, it's a far cry from the "everyone is a bastard" mentality that I played through The Wild Hunt with. Toussaint has a sense of nobility and justice that isn't normally present in Geralt's world.

Suffice to say, the writing is, as usual, the highlight of the game. CDPR have really outdone themselves in Blood and Wine, with the main quest being a thrilling roller coaster of emotion that will last you a good 10 hours, and plenty of lengthy side-quests to pad things out to around 20-25 hours. One character in particular, Regis, is fantastically written, and his conversations with Geralt about justice and the state of their world are the real treat of the whole thing. He really is the "Gaunter O'Dimm" of this expansion, and he helps give us some deeper insight into Geralt's lifestyle and philosophy.

Not everything in Geralt's life involves some cosmic calamity coming to end all life as we know it.

Just like runewords in Hearts of Stone, Blood and Wine does introduce a few new gameplay features. First up are mutagen mutations - a new way to spend mutagens and skill points in order to unlock additional, powerful bonuses to your signs and combat abilities. There are also Grandmaster armor and weapon sets to collect for each of the Witcher schools. They are quite expensive to craft, but come with powerful "set bonuses" that activate when wearing multiple pieces. Min-maxers will certainly be satisfied.

For the Sims fans within us, Geralt is given the deed to a vineyard fairly early on in the game, which can be upgraded both visually, and with useful gameplay features such as an armorer's bench and grindstone. It was quite nice to have a "home base" for once - something I really appreciate in open world games.

If I had to pick something I disliked about Blood and Wine, it would have to be the boss fights. Boss fights have never been a real strong point of The Witcher, and are often exercises in frustration, with the bosses having arbitrary, poorly explained weak points, and being prone to glitching out. In one of these fights for example, I kept reloading my save to try and save my companion from death, only to eventually give up and find out he doesn't actually die, despite the game suggesting otherwise. A handful of (mostly graphical) glitches, and the ever-janky horse combat were the only other real problems I encountered.

Blood and Wine is not the grand, epic, Wild Hunt adventure, or even Hearts of Stone's dramatic "deal with the devil". At first glance, it's simply another chapter in Geralt's life, but when you look harder you realise that that's precisely why it shines. Not everything in Geralt's life involves some cosmic calamity coming to end all life as we know it. Sometimes he just gets swept up in a wacky fairytale land of knights and princesses and vampires. Best of all, in a very Deadpool-y way, Geralt is perfectly aware of how ridiculous his life is. Blood and Wine may not be the deepest, most meaningful Witcher content I have played, but having one final, light-hearted adventure with everyone's favourite grumpy old monster hunter is the best way to say goodbye to Geralt of Rivea.

Bottom Line: Blood and Wine is not the epic "save the world" adventure prior Witcher titles were, but that's okay. It's a fond farewell to Geralt of Rivea, ensuring your last adventure with The Witcher leaves a smile on your face.

Recommendation: Blood and Wine is insane value-for-money when bought in The Witcher 3's expansion pass. If you have any interest in The Witcher at all, you will snap this one up ASAP. If nothing else, you should buy it to support CDPR's sensible, consumer-friendly policies.