Given the 2010 release, Chime hasn't been on many people's minds for years, and even when I heard there was a sequel, there was little fanfare or ceremony, so I was surprised when I heard it was launching recently. I adored the original, so I was thrilled to see the sequel at last, and there was not a hint of disappointment in what they delivered. Chime was an unexpected delight, and the sequel was born of a modest Kickstarter campaign last year. 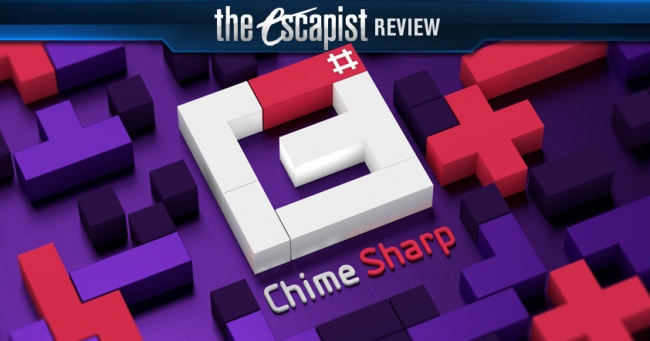 Chime's beauty is its simplicity, a game that never transcends the complexity of a toddler's shape-matching toy, yet is enthralling enough to sink hours into. The shapes are reminiscent of Tetris, but instead of controlling their fall, you can place them as you like on a 2D board. There are different boards, each with designs and obstacles, as well as different variations of the shapes to work with. Your objective is to score high by making blocks, or "quads" and expanding them before they time out and get brushed away by the game's timekeeper. Your completed quads leave an impression on the ground, however, and you're hoping to be able to cover the entire map with your completed structures.

As you place your shapes, you'll see a bar constantly sweeping across the board. This is how you get to interact with the soundtrack, embellishing the music each time the bar touches a shape or quad. I'd recommend checking out a trailer for more detail, as any attempt on my part to elaborate in technical music terms would be futile. Suffice to say, music is far more engrossing when you feel some sense of influence, and it is remarkably well done in Chime Sharp to be a subtle, yet satisfying addition.

Bottom Line: Chime Sharp is an incredibly simple game, just like the original, but the dynamic soundtrack and mesmerizing gameplay makes for an exceptional experience.

Recommendation: If you hate music and/or Tetris, give Chime Sharp a miss, but everybody else will love it.