Developed by and published by Ocelot Society. Released on Sept 20, 2016. Available on PC (reviewed) and Mac. Review code provided by publisher.

Humanity is out there, left alone, drifting in space.

Event[0] has left me feeling that way, with my gloved palm pressed against the cold glass of the Nautilus. Outside, there is nothing but disquieting silence-an enormous void of blackness, wreckage, and distant stars. The only life left rests inside the cold metal panels of the ship, and the rudimentary artificial intelligence baked into the dated and clunky computer terminals. 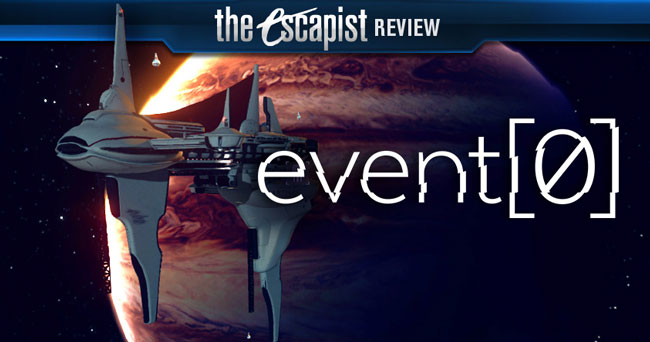 Out in the eternal nothingness of space, the crew of the Europa 11 were slated to establish themselves on Europa, one of the moons of Jupiter. Prior to arrival, a code red is called, which funnels all personnel to the bridge. For reasons that defy logic (and protocol), the protagonist is instead funneled into an escape pod. This last escape pod ejects. And with nothing but the utter silence of space, the radar shows as the Europa 11 becomes a disconnected mass of pings in space, slowly drifting apart. The ship, and its crew, are no more.

After an indeterminate amount of drifting, the haunting sound of a woman singing comes through the communication system. In the distance, a bulbous ship built around the aesthetic of mid-80s science fiction grows in size, beckoning the escape pod to dock.

Inside the airlock, an ancient computer terminal flickers to life.

Kaizen-85 is an autonomous intelligence intertwined into every one of the systems of the ship. Doors, food, water, toilets, beds, elevators, and airlocks all rely on the cheery if unintelligent personality to function.

And Kaizen desperately wants the wayward astronaut to destroy the ship's primary engine, the Singularity Drive.

The remainder of the journey is spent exploring the understandably cramped Nautilus, learning about the lives and deaths of its former crew, and trying to become friends with the strange and alien personality that inhabits every single one of the scattered terminals of the Nautilus.

Kaizen is more than just the only voice in the great empty, he is the driving force behind everything that happens on the Nautilus. Kaizen could, at any point, use any of the ship's systems to fly back to Earth, but he is hellbent on making sure the Singularity Drive is disabled. In absence of the ability to fly the ship back oneself, the player must speak to (and work with) Kaizen to be able to get home. This is the biggest issue with Event[0]. The problems with having Kaizen as the only way to interact with the game are twofold:

Passing even a rudimentary amount of time looking around the Nautilus betrays with abundant clarity that Kaizen is hiding something. Although he will never outright say it, the former crew members of the Nautilus have left strange scars on Kaizen's sociopathic, childlike psyche. Peering through the odds and ends of the ship will inevitably reveal most of what went on prior to the wayward astronaut's arrival, but the feeling of being willfully kept in the dark is a lingering misery, distracting focus away from just how exceptional so many other parts of the experience are.

Furthering that flaw is the rudimentary nature of the artificial intelligence. Kaizen isn't smart. Kaizen is hardly able to parse speech, which is an issue when literally everything a player can do will depend on Kaizen understanding what the player is saying. The best way to communicate with Kaizen is to treat every sentence as if no sentence had come before it, and one-word sentences will be met with confusion. "How?" and "Why?" aren't sensible, reasonable things to ask Kaizen. Most attempts at speech, in fact, return odd and disconnected thoughts because the original intent of the question was lost in translation. Kaizen just isn't artificially intelligent enough to sustain the feeling of player agency. Questions are more addressed by luck than intent, Kaizen hides what ideas it pleases and can never really be pressed on important details, and as above, is the only way to interact with anything on the ship. Player agency slips further and further away, Kaizen is the only way to get most things done.

What Event[0] does right is difficult to summarize, though. The Nautilus is a very successful home. It has the messy, lived-in quality of a tight living space, without losing the colder, clinical pragmatic design and feeling of a prototype spaceship. The notes, the logs, the little details scattered around the ship-all of it points to a very human place, and manages to tell a lot about the crew, their conflicts and concerns, their personalities, and the uncertainty that leads up to the player's arrival.

In the brief two or three hours of the first playthrough, very little of everything will really settle in. Everything that the player finds is dense with little details that get lost in figuring out the immediate needs, the immediate mystery. After hours or days, more of the humanity will sink in. What Event[0] does exceptionally well is written in the margins. The margins are overflowing.

The same song that played in the escape pod, the final echo of humanity out in the infinite abyss of space, is the curtain call on the final hours of the Nautilus' long journey away from home. How it resolves is up to the player, and Kaizen, but any of the three possible endings don't feel ideal.

I still think a lot about Event[0]. There's so much there to unpack I feel like I'll find something else, something new, something more if I just take a few extra hours to retrace my steps through the Nautilus, maybe I'll get Kaizen to talk about something new, or find some log I had overlooked in one of the quieter terminals. I still think about the crew of the Nautilus, about Kaizen, about the song that haunts the length of the journey and is easily the best use of music in an indie game in many years.

Event[0] is a lot of things. Overflowing, dense, humanistic, isolating, personable, alien, difficult to navigation, and is the closest thing to a siren that I'll ever encounter in my life. "Hey Judy" will be a part of my life forever, in the same way that Bastion's "Setting Sail, Coming Home" is, and that alone does more to explain Event[0] than I think I ever will with words alone.

Bottom Line: Event[0] has the length and teething pains of a tech demo, but tells a story to beautifully to overlook without good reason.

Recommendation: Event[0] is a hard game to recommend because the flaws are all encompassing, but the rest of the game is exceptionally gorgeous. Worth experiencing by all but those who avoid story-based games.