Developed by The Coalition. Published by Microsoft. Released on October 11, 2016. Available on PC (reviewed) and Xbox One. Review code provided by publisher.

Gears of War 4 is a Gears of War game. You're going to play as a big burly (ex) soldier man, shoot at Locusts from chest high walls, have a chainsaw attached to the end of your rifle, destroy a bunch of dark, Gothic architecture and of course fight through the pain! That's not to say that GoW 4 doesn't offer anything new or exciting, but that it is a GoW game at it's core, and longtime fans will certainly not be disappointed. 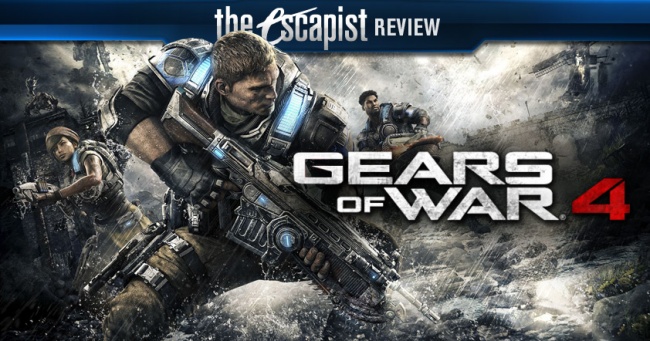 Gears of War 4 is one of the very first "Play Anywhere" titles, and certainly the first of any real merit. What this means is that buying a copy of the game on either Windows 10 or Xbox One allows you to play the same copy of it on both platforms. There's also LAN play, and cross-play with the Xbox One version, which means that anyone can play Gears with anyone regardless of their platform of choice. Surprisingly, the transition is pretty much seamless. I've heard horror stories in particular about the Windows 10 store's "UWP" apps but GoW 4 gave me no such troubles. I could easily switch from controller to keyboard, from TV to monitor, and had absolutely no restrictions on any graphical options - of which there are plenty.

These extended customization options, coupled with the fact that the PC version of the game comes with all of the features of the Xbox One version (including split-screen co-op!) is Microsoft's belated attempt to woo back PC gamers after that whole Games For Windows LIVE fiasco. And you know what? As a proud member of the PC gaming race... it's working. I really have to applaud Microsoft and The Coalition on this one for doing such a fantastic job opening up what has traditionally been a very closed platform, and showing us the benefits of the Universal Windows Platform. 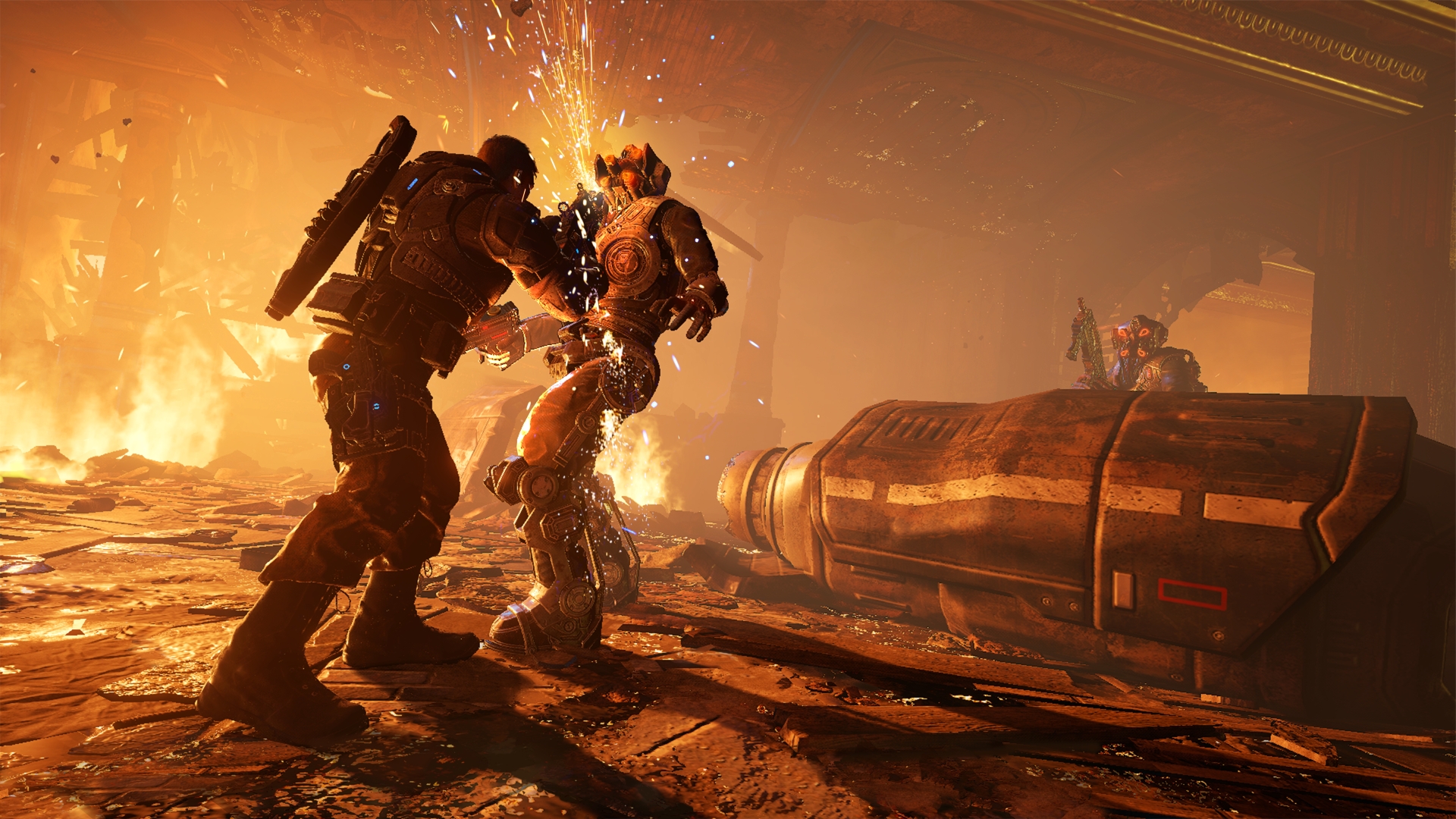 There's only one real problem with this whole Play Anywhere thing and that's that mouse and keyboard players will completely dominate controller players. Playing the game on "Hardcore", I switched to keyboard and mouse from controller about half way through and It was seriously like I had just dropped two difficulty levels. I think it's going to be a really big issue when the multiplayer servers go live: particularly if you're a controller player and you like to play versus (Correction: There is no cross-play functionality for the versus mode, only Horde mode and co-op).

But versus should only really be a distraction, as the focus of Gears has always been co-op. Just like Marcus and Dom, the series is best enjoyed with a buddy by your side. Horde mode in particular has received quite a revamp, and is being rebranded as "Horde 3.0". Each player now choose from one of five different classes: Engineer, Heavy, Scout, Sniper, Soldier, and then chooses a set of customization options represented by collectible cards. The classes and what they do should be pretty self explanatory for anyone who's ever played a class-based shooter, with the exception of the engineer, who is focused around the new fabricator mechanic.

The fabricator is a key item you run into early in the main Gears of War 4 campaign. It's essentially an industrial grade 3D printer. In Horde mode, you'll use the fabricator to build weapons, fortifications such as MG turrets and fences, and even teammates that have died in combat. It's a fantastic addition that lets players prepare and modify their defenses however they want to, and adds for what Microsoft is calling "emergent gameplay". I've always enjoyed Gears of War's horde mode and Horde 3.0 is the best version of it yet.

Even if you don't happen to have a buddy, the campaign is still a blast. It's like the "Michael Bay Movie" of video games - a paper-thin plot, cringe worthy one-liners, and plenty of explosions - that nevertheless makes for a jolly good afternoon. This time around, you play as Marcus Fenix's son, JD Fenix, best friend Del Walker, and obligatory love interest Kait Diaz, 25 years after the events of Gears of War 3. Starting off as rebels, fighting against the Cogs and their robot armies, a new enemy - the Swarm, rises from the ashes of the defeated Locust, forcing you to seek out old man Marcus himself for help.

Gears of War 4 isn't the "smartest" game out there, but it is certainly one of the most satisfying.

While there is plenty of the "gothic castle" stuff that Gears is famous for, GoW4 also has a lot of fresh locales to help keep things from getting stale. You'll fight robots in giant technological cities, ride motorbikes through open plains and forests, and defend a rag-tag corrugated iron shanty town. A particularly cool prologue at the start of the game puts you in the role of a "random soldier" during several different pivotal events from Gears of War history - a great nostalgia trip for series veterans, and introduction for newcomers. Enemy variation is also lot more broad this time around, and a couple of tweaks to the standard "hide behind a chest high wall and pop out every so often" combat, like close-range combat knife executions, improve on the formula.

It's worth pointing out how beautiful this game is, and more importantly, how incredibly smooth it runs. On my GTX 970, I was able to run the game at "Ultra" settings, and I never dropped a single frame below 60. I also experienced no graphical or gameplay glitches in my playthrough, and didn't have a single crash. The models are gorgeously rendered, the weather effects are breathtaking, and the locations are awe-inspiring. While I know it will never look this great on an Xbox One, it certainly feels like it was built with Project Scorpio and high-end PC gamers in mind. I can see Gears of War 4 being one of Scorpio's flagship titles in the near future.

Just like with Michael Bay films, there is a certain flavor of mindless fun associated with the Gears games. Gears of War 4 isn't the "smartest" game out there, but it is certainly one of the most satisfying. It's more of the same, with a lot of small tweaks and additions, but sometimes that's enough. Sometimes you just need to chainsaw a dude in half.

Bottom Line: Gears of War 4 is the best Gears yet. Don't expect a revolution, but a refinement of all of the aspects that make Gears great, including an over-the-top, almost cartoonish campaign, and a kick-ass upgrade of Horde mode. It's also a flawless representative of Microsoft's new "Play Anywhere" and Universal Windows Platform initiatives.