The latest mice to join Kaliber Gaming's lineup are the Fokus, the Symmetre and the Retikal. The Fokus and Symmetre are ambidextrous, meaning that they are great for lefties as well as right handers, while the Retikal is a more "traditional" gaming mouse, built specifically for FPS titles. We check out Kaliber's new offerings, and see how they stack up against the competition.

First up, let's take a look at the Fokus, which is the most "high-end" of the three models. But, at just $49.95 it's still considerably cheaper than counterparts such as the Logitech Proteus Spectrum ($89.99) and even the Razer Chroma ($69.99). The first thing you'll notice about the mouse is that despite this low cost, it's exceptionally well-built. It has a white aluminum frame, and is easily one of the most sturdiest mice I've ever used. I like my mouse to be a bit more weighty than most, and while the standard workaround for this is adjustable weights, the Fokus solves the problem by just being heavy. 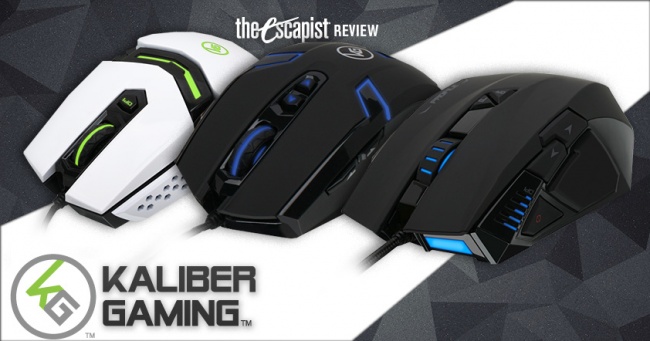 The mouse features eight buttons, including the DPI switcher. This is where the symmetrical design can become somewhat of a hindrance. First up, the two side buttons on the left side (i'm a right hander) are in a kind of awkward location. With my palm clasped over the mouse, I had to really move my thumb to be able to hit the closets button. The two buttons on the right side are at best, useless and at worst, a hindrance. There's no way to comfortably hit these buttons, and as my ring finger rests on this side of the mouse, i found myself accidentally pressing them during play quite a bit. By default, they control volume, and I ended up simply disabling them.

I imagine left handers would have the exact same problem for the buttons on the left side. The flaw of symmetrical design is that while either hand can use it, it's not really optimized for right or left.

The rest of the buttons are fine. The two main buttons in particular, being a part of that aluminum frame, are very satisfyingly clicky. The DPI switcher is great, and I particularly like how it changes color depending on which DPI you have selected. I do really wish it was an up-down toggle, rather than a single button though. Similarly, while the mouse wheel is solid with nice grippy rubber, I do miss the scroll wheel "unlock" button from my G502, as well as being able to click the wheel left and right to switch tabs in my browser.

The mouse also has a full spectrum of RGB lighting, and comes with a neat "breathing" effect by default. It fits in my hand very comfortably and moves very smoothly thanks to its anti-stick pads.

The Symmetre, on the other hand, seems like it's simply the "budget" version of the Fokus. At just $24.95 it's very cheap, but the the build quality is noticeably worse. Gone is the smooth, cool aluminum of the Fokus, replaced with flimsy plastic. It suffers the same problem/feature of the Fokus in being ambidextrous, but I feel that it's even more pronounced on the Symmetre. The right side buttons have that same problem of being nigh impossible to click, and even the left side thumb buttons are in an incredibly awkward position. I had a really hard time reliably reaching the furthest button.

The Symmetre is also quite small physically, so as someone with big giant hands it wasn't particularly comfortable. It doesn't have the full spectrum RGB lighting of the Fokus (it instead glows blue), but it does have the up-down DPI toggle that the Fokus lacks. It also only goes up to 4000 DPI, while the Retikal goes to 5000 and the Fokus goes all the way to 8200.

As for the Retikal, it's a more familiar asymmetrical design that we're used to seeing in other gaming mice. It has the standard mouse 4 and 5 on the left side, as well as a DPI and profile switcher on top. Curiously, there is also a 6th mouse button on the right side, that rests just under your ring finger. It's a nice addition to be sure, and I found its best use is as a "mouse 3" replacement, as sometimes clicking the scroll wheel as a button can be finicky.

It also has a "sniper button" - a button just below the thumb buttons that when held temporarily lowers DPI. It's useful for when you're sniping in an FPS like Overwatch. I loved this feature on Logitech's Proteus Spectrum and it works just as well with the Retikal. Adjustable weights and fully customizable profiles (though why anyone would need five separate profiles for a mouse is beyond me) round out the usual suite of gaming mouse features.

At just $34.94, it's only slightly more expensive than the Symmetre, but unfortunately, it suffers from the same build quality issues. The buttons are unstable and shaky, and the strange "stunty" shape of the mouse isn't particularly comfortable.

All three mice can be fully customized with Kaliber Gaming's proprietary software. Unlike other gaming peripheral software (hello Logitech!) the installation was very easy, and didn't give me any hassles. The software itself is also pretty lightweight and won't be a huge drain on your system, and as the mice have on-board memory, once you've set up all your customizations you can close the software and they'll remember your settings.

Bottom Line: The Fokus is a fantastic mouse for the price. It's the cheapest "premium" grade gaming mouse out there, with a sturdy, solid aluminum build and a lot of customization options. While I'm not a fan of the ambidextrous design, as I think it leads to awkward button placement, it's a feature lefties may appreciate. The Symmetra and Retikal on the other hand, while incredibly cheap, are hard to recommend. I disliked the build quality, button placement, and small size on both.

Recommendation: If you want a premium gaming mouse at a non-premium price, then the Fokus is for you. I'd shy away from the Symmetra unless you really need an ambidextrous mouse on a budget, and as for the Retikal, there are much better options.