It's crazy to think that Pokemon Sun and Moon mark the seventh generation of Pokemon games. We've come a long way since Red and Blue's Kanto region. We've traveled all over the fictionalized Japan in Gen II, III and IV, went to the fictionalized New York and Europe of Gen V and VI, and this time around we're heading to the beautiful tropical paradise of Alola, the Pokemon universe's Hawaii. Sun and Moon, like other Pokemon generations, doesn't remake the wheel, and instead brings with it plenty of quality-of-life changes, new features, and of course, new Pokemon. It's an iteration on one of the most iterative games in gaming, but it may just be the most successful one yet. 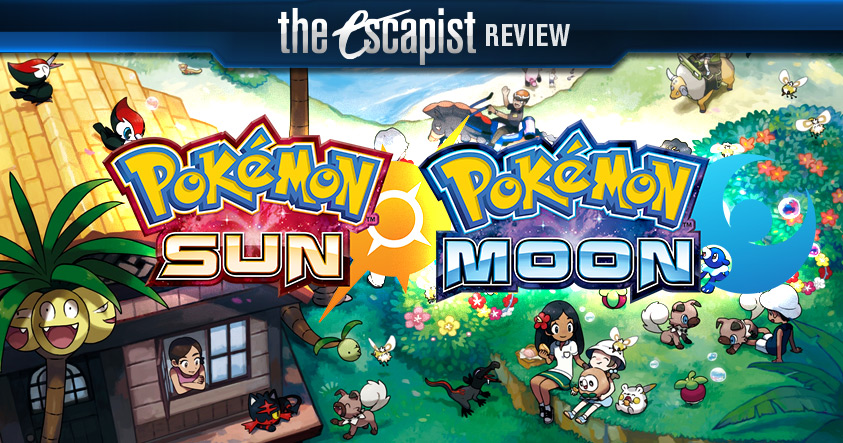 The first thing you'll notice about Alola is, just like in real-world Hawaii, how chill everyone is. The Pokemon Professor wears an open lab coat with no shirt. Your "rival" actually picks the starter that is weak to yours (unlike every other generation) and doesn't really care if he wins or loses. Even Team Skull, the game's new "evil team" is seen as a mere nuisance by the local population and flat out ignored most of the time.

Gyms are gone, replaced with the new Kahuna and Captain island trial system. Each of Alola's four islands has a "Kahuna" and several captains. In order to face the Kahuna, you'll have to first complete each of his or her captain's trials. The trails all take place in Alola's natural landscape, and involve tracking down and defeating a super-powerful "Totem" Pokemon. It's a really nice, twist on the old gym system.

The island trials are far from the only welcome new feature. As I covered in my top five new features article, there's a lot for longstanding fans of the series to be excited for. The integration of the type-chart into the battle menu, and the replacement of Hidden Machines with "Poke Ride" are the biggest of these, and is something we have been waiting for for a long, long time. Smaller changes, like Pokemon Refresh being used to cure status conditions, the "Rotom Dex" and its new features: the ability to scan QR codes to add Pokemon to your Pokedex, and the "Pokemon Snap"-esque Poke-finder that lets you snap pictures of Pokemon, help complete the experience.

Poke Pelago is another neat new feature that allows you to actually do something with all those Pokemon you've been cramming into PC boxes. Pokemon stored on boxes are able to explore the islands in Poke Pelago, to collect items, level up stats, grow berries, and even encounter new wild Pokemon. Festival Plaza is the new multiplayer zone, and allows players to collect "festival coins" by performing streetpass tasks, that can be traded in for rare items.