Developed and published by Smiling Buddha Games. Releasing Q1 2017. Available on PC(reviewed), PS4, Xbox One, and Wii U. Review copy provided by publisher.

Use Your Words is a new kind of party game from the mind of Brent Black, Julian Spillane, and the team at Smiling Buddha Games. It's a game that borrows from the party game genre from titles like Pictionary and the extremely popular Cards Against Humanity. Use Your Words uses a different approach by being much more interactive with the use of phones and tablets. This creates a more auditory and visually pleasing experience. It's one of that things that drew me to the game in the first place because I did enjoy Pictionary as a child and this game really feels like the current generation's equivalent. 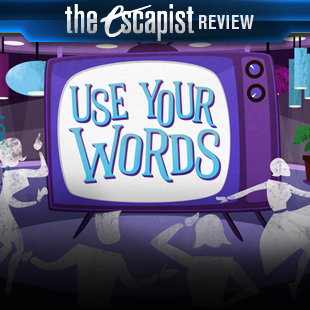 Each player must use either their smartphone, tablet, or other electronic device to visit the game's website and insert their game room code. Once entered,the game will begin automatically and take you through a series of game modes each round.

There's so much to say about this game and it's only in early access. While that may turn some gamers off, Use Your Words is a grand exception to the rule that early access games must be bad. . It's witty, has a pace that can be controlled by the player, and an awesome soundtrack and art style that some would argue is more relevant to the 80's.

However, with the Gary Owens inspired voice over and color scheme, Use Your Words is more more relatable the swingin' sixties. The old television sets, the oddly shaped chairs, even the caricatures on the menus and such lend it a very pleasant and old aesthetic. It may not be for everyone, but individuals of a certain age, as well as connoisseurs of the jazz scene will likely enjoy it.

Players can choose from an initial set of four minigames at launch. Sub The Title, which has players substituting their own dialogue into scenes from movies. Probably one of the best parts of this game mode is being able to pretend that you're doing your own fan version of MST3K. It's a boat load of fun and my favorite minigame so far.

Blank-o-Matic is where the game really shines because it allows players to use their own words (get it?) to fill in the blank. Think Pictionary, except no one is crying at the end and your parents won't be getting a divorce. This is the trickiest of the modes in my opinion, because the seven house decoy answers for this mode genuinely seem like things any rational person would say to what they're seeing. This is a serious problem for some, because choosing the house answer will lose you points. This particular mode is where you will start to see the creativity of the game's writers come through.

Now I know that I said that Sub The Title is a lot of fun for me because I really like the idea behind it, but the truth is that Blank-O-Matic is probably the most fun that the average player will have with this game.

EXTRA, EXTRA is amazing. It essentially boils down to who can write the most click baity title for a picture. Players are given a series of photos, almost every photo you see in this game is going to do one of two things to your mind: Give you an aneurism from laughter, or make you question if the people behind this game are folks you would feel comfortable being in the same room with. You're going to have fun with this one regardless of how silly the pictures get and some of them are off-the-wall stupid at times. Overall though, I still had a good time with it.

Finally, we have Survey Says. This one is literally what it sounds like, except without the velvety mustache of Steve Harvey attached to it. Instead, we get a series of phrases to fill in, with very little time to do so. In my experience, at least most of the time, you don't have time to finish your answer unless you're a world champion texter. This may seem like a drawback but it often times make the answers funnier because the context is distorted.

One thing I think needs to be addressed is that Use Your Words can be a bit tricky to grasp at first but that's only because of pre-generated answers referred to as "house answers". These are used as a decoy of sorts and are basically this game's equivalent of giving the smug player with one card left in UNO a draw four card.

Bottom Line: For the first time in a long time I only have one complaint about a game I'm reviewing. This game really needs to add a single player mode. I have no idea how it would work but it's kind of pain finding people to play with. The game has occasional hang ups and graphical missteps on occasion. As I said earlier, the average player should expect to spend at least 15 minutes getting the hang of the games concepts and core principles of the game and that's mostly because of the seven house card rules.

Recommendation: If you enjoy party games and insanity, play this game.