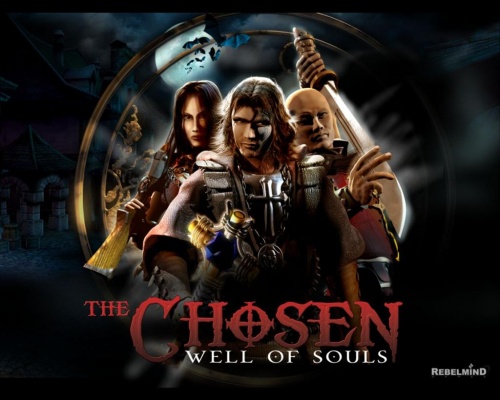 Simile-based advertising, long a favorite of marketing types in just about every industry, is a double-edged sword. It simplifies an advertiser's life by offering a fast and direct means of getting across to a potential customer what's inside the box. You ease the demands of explaining your product to an easily distracted public when you can point at something else and say, "See that? Like that."

The downside, of course, is invoking names from the past unavoidably invites comparison and creates in the audience an expectation that the new product will be better than, or at the very least on par with, the old. By bringing up the names of Diablo and Dungeon Siege, two franchises that have achieved enviable levels of success, Meridian4's The Chosen: Well of Souls has taken the risky path of lining itself up against some very stiff competition.

The Chosen: Well of Souls is technically sound, and kudos to the developers at Rebelmind for that. I had initially expected to weave a tale of buggy woe, as within the first hour of playing I had one crash-to-desktop and three hard locks; since then, however, the game has performed flawlessly. Either I was extremely unlucky at the start or I've been even luckier since, but overall the game has been an absolute rock. It even alt-tabs like a champ, an important feature for those of us who don't just game when we game.

The landscapes are also attractive. It's not going to make you forget about Crysis, or even Oblivion, but the environs in Well of Souls are certainly prettier than those found in its aforementioned (although admittedly dated) competitors. Even compared to more recent offerings like Titan Quest, Well of Souls stands out. Its renderings of lush jungles, medieval cities and rocky, barren deserts are respectable eye candy at the very least.

Unfortunately, the good news is also the bad news, because that's all there is. Solid technical chops does not a great game make; it's why id games are the target of seemingly endless heaps of scorn while a bug-ridden nightmare like Vampire: The Masquerade: Bloodlines is held up as a pinnacle of design excellence. And as much as the game succeeds technically, it fails in virtually every other area.

Character creation is almost a direct lift from Diablo. In The Chosen: Well of Souls, you play one of three classes: a beefy, sword-swinging goon; a mystic wielder of magical energies; or a lithe, agile (and, continuing the pattern of similarity, female) master of long-distance death. Attributes are split between the familiar four categories of strength, dexterity, knowledge and vitality, with a player's health and mana levels derived from them, while a class- and level-based skill tree rounds out the proceedings.

It was at the character creation screen, in fact, that I felt the first pangs of trepidation over Well of Souls. Deciding to play the Swordsman (having learned long ago that hokey religions and ancient weapons are no match for a good sword at my side), I was introduced to the character with the following:

"Born in the Tien-Szan Mountains, Khan has trained in the martial arts since early childhood. His goal has always been to use his abilities to help the oppressed. He is known as the Blade of Spring, and has become synonymous with terror among the demons. Everywhere people suffer Khan appears to ease their burden. He has become a legend for his battles against the mountain demons, the Qi-Mei."

Impressive, no? You can't help but feel a tingle. As it turns out, however, The Blade of Spring, Legend of the Mountains and Terror of the Qi-Mei apparently forgot all his stuff back in Tien-Szan, because he arrives in the demon-infested city of Kamieniec armed with a branch.