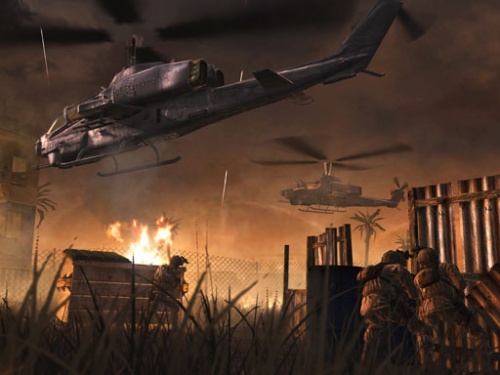 Back in 2002, before the Call of Duty series began, Medal of Honor: Allied Assault was created by 2015 Inc. Allied Assault became an instant PC classic, and it made WWII videogames a cinematic, heart-pounding experience. The Omaha Beach mission remains one of my favorite levels in gaming history. From its tension-filled beginning on the coast of France to the desperate scramble to the top of the beach, Spielberg's Saving Private Ryan had a contender in videogame format.

Like an adrenaline shot rammed into your chest, it's hard not to be stunned by the whole experience. The time Infinity Ward took off between Call of Duty 2 and Modern Warfare has been well spent; it's by far the best Call of Duty game yet.

The first mission, which opens with your crack SAS team infiltrating a military ship, is an exhilarating action experience that sets the game's modern tone. Fast-roping down a helicopter rope, you watch a bridge full of soldiers look up in surprise as you open fire from outside the ship. It's a sublime cinematic moment that speaks to the series' ambitious progress.

While Modern Warfare's visuals, Mis-En-Scene and overall feel are a departure for the series, the interface and controls are reassuringly familiar. It's the fundamentals of gun combat that the Call of Duty series has down to an art, and Modern Warfare represents a subtle evolution. The quiet thwack of a bullet finding your enemy's cranium; the distinct contrast between a wild blast of gunfire and pin-pointedly accurate assassinations; the panic you feel as your vision blurs red, a sign you've been hit.

Switching between normal view and zoom mode is used as a narrative device: When it's time to kick ass and take names, we squeeze the left trigger. When it's time to pay attention to dialogue and environment, we release it. This cognitive system allows us further freedom in playing the active protagonist in Modern Warfare's campaign.

It's within these fundamentals where players will find an infinitely re-playable killing experience. Make no mistake; at its heart, Call of Duty 4 is still all about widow making. Every gun game glorifies violence, but this one makes it beautiful.

This is a violence-obsessed game. The opening credit sequence features an in-game cut-scene viewed from the perspective of a soon-to-be executed president of a vaguely undetermined Middle-Eastern country. The game's villain, Al-Asad, draws a Desert Eagle in your face; reverberating bass thumps shake your console, as poor President Al-Fulani's heart strains in anticipation. In slow motion, the terrorist fires a single shot directly into your field of view, and the game blacks out.