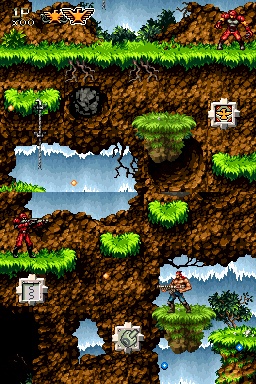 Nostalgia is perhaps the biggest moneymaker in videogames. It brings us Mario every couple years for a hop around Mushroom Land. It keeps the Virtual Consoles and Xbox Live Arcades of the world stocked with a library full of material.

And in 2007, 20 years after the original was released, Konami bring us Contra 4, which is actually the 13th Contra game. Fortunately, this type of misleading branding is commonplace in the videogame lexis.

Let's get the obvious out of the way: Contra 4 is a very tough game. If you have kids, or know any, don't let them play this game. Not because of any violent content, but because of its difficulty; it will make them cry.

The science of Contra works on a simple equation: You get shot, you die. When most of a game's enemies can withstand more damage than you can, it's a surprising and frustrating experience. Dying every time you get shot? Why, that must make Contra the most true-to-life shooter ever made.

And just like in life, dying in Contra 4 sucks. You begin each level over from the start; no quicksaves here! The only way most people will be able to beat the game is by memorizing all the levels, just like the first game. In this respect, it can be addictive and ultimately rewarding, if you've got the endurance for it.

"Hard" mode is a vast understatement. My lives barely last more than 10 seconds at a time. Getting past the first level without seeing a "Gamer Over" screen is an ordeal in itself. And then there's the start menu, glowing ambivalently in your face as you shamefully return to "Easy" mode for the umpteenth time.

In the same way that the Guitar Hero and Ninja Gaiden series have ramped up their difficulty to follow players' development, Contra 4 represents an even tougher challenge than its original namesake. The toughness is softened with the help of an ad-hoc multiplayer buddy, but the amount of bullets passing by on your DS' screens can make it even tougher to avoid enemy fire.

I found myself wanting to be satiated by the game's old-school ways, but try as I might, I just didn't get much out of it. Contra 4 is a cycle of death: The first time you face a boss, you have a snowball's chance in hell of surviving. But on your second attempt, your muscle memory clicks in, and you systematically find ways of avoiding its signature attacks. Some people are going to love this binary of challenge/reward gameplay, but others, like me, are just going to get fed up very easily.

In real life, I've actually found myself eyeing street corners suspiciously for the presence of commandos lying prone atop sandbags ... it's those sneaky bastards that get me every time in the game. Them, and those fucking grenade tossers. Play the game long enough, and you'll start to really enjoy the action. When you can run through an entire level, killing every enemy without dying yourself, you feel like Rambo.

When you're not busy trying to focus on massacring the chump hordes, the environments in Contra 4 offer an appealing view. Each level has a distinct personality and is frequently broken up with interludes of mini-bosses or changes of direction (for example, moving upward as opposed to sideways).

The DS' screens are both a blessing and a curse; they function well in multiplayer mode if each player tries to occupy a screen to himself, but it's often difficult to notice bullets or bad guys coming at you when they pass through the horizontal divider.

Getting far enough in the game will give you access to some rather delicious unlockables, including the first Contra games, Contra and Super C, versions ported from the NES. And yes, thank God, you can still punch in the Konami Code and get 30 lives. But there's no multiplayer support in the older games.

For people with rose-colored glasses, Contra 4 is a satisfying side-scroll down memory lane. It's a cockle-warming reminder of what made games great in those days: rewarded perseverance, gratifying power-ups and terrifying boss-battles.

But I like to think that today's action gamer prizes narrative, immersion, depth and innovation. Contra 4 has none of this. By that comparison, it's still not a bad game; it just might not be what everyone wants to play in 2007.

Bottom line: An entertaining or frustrating experience, depending on the player. Contra 4's punishing difficulty level may set it apart from contemporary peers, but it makes the game a rewarding combination of distinction and reminiscence.

Recommendation: Rent it, or buy it used. It's not quite worth its sticker price new.

Alex Hayter is a student and journalist living in Waterloo, Ontario. When he's not working on his university newspaper he is busy eating candy and blogging about videogames on www.cordweekly.com.