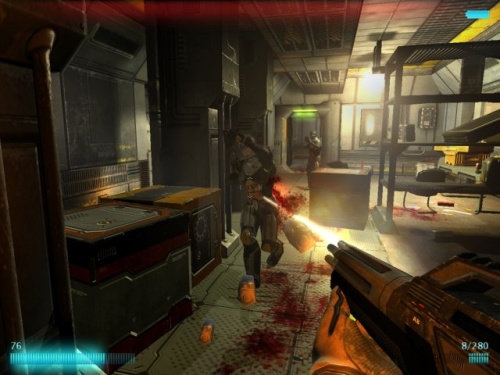 European games, like European women, are different. And like all things exotic, the promise of reward carries with it a certain degree of risk. Buying a title developed for European audiences is a bit of a dice roll: You might end up with something uniquely cool and far removed from your everyday experience, or you might end up with haggis. With that in mind, we've got two offerings from European developers to look at, both action games and each with a healthy dose of that special "not from around here" distinctiveness.

First up is Alpha Prime, a futuristic FPS by Czech developer Black Element Software. The game takes place primarily on the eponymously named mining colony of Alpha Prime, where a faceless megacorporation known only as The Company extracts and refines Hubbardium, "the fundamental raw material for cybernetics, biomedicine and nanomedicine." Humanity runs on Hubbardium, and Alpha Prime is the place to get it. But something has gone terribly wrong: Hubbardium radiation has driven the miners violently mad, and The Company is taking drastic steps to keep a lid on the bad news. You, as one of the finest prospectors ever to break rock in search of a fortune, must descend into this investment-driven quagmire of suffering and death to rescue the guy who stole your girlfriend.

The game opens with a long and confusing cut-scene centering around Hubbardium as "the heart of Glomar," an old miners' tale that comes up repeatedly throughout the game without ever approaching even a hint of explanation (or, as it turns out, relevance), that culminates in an encounter with the aforementioned old girlfriend who dumped you years ago for your ex-best friend. Turns out he's trapped on Alpha Prime, and she wants you to go get him.

Hard-bitten and cynical though your character may be, he nonetheless agrees to go off on this mission of mercy with just slightly more than a minimum of fuss. A brief interlude for a bit of tutorial-like running around and another cut-scene or two later, and you find yourself on the arid surface of Alpha Prime.

In the early stages of the game you'll encounter miners, who appear to be not so much violently insane as just gainfully employed, going about their jobs in a fairly normal manner, watching gauges and conversing among themselves until you show up with gun in hand and bad news on your face. Wasting these guys was more than a little surreal, since they showed no signs at all of hostility until I - an armed trespasser, remember - came charging into the room waving my piece around. It was an odd way to begin and made me feel more like a mass murderer than an intrepid rescuer, but apparently that's business as usual on Alpha Prime.