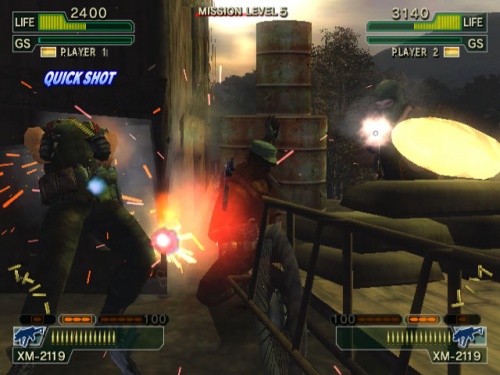 The arcade was a treat for me when I was younger. Even if I was busy playing more complex games like The Legend of Zelda or Mega Man X, there was always something alluring about the simple physicality of the arcade cabinets — beating the sticks and buttons, reloading a gun with a flick off-screen.

Ghost Squad, Sega's Wii version of the 2004 arcade shooter, does an excellent job of bringing the arcade feel home. All you have to worry about is pointing the cursor at the screen and pulling the trigger, occasionally using the “A” button to disarm bombs or engage in hand-to-hand brawls.

The game is three levels long and takes about half an hour to beat. Branching paths and increasing complexity levels balance it out a bit, and a leveling system that rewards the player with more weapons and costumes (including the Virtua Cop 3 uniform and a panda suit) incentivizes you to play more. Since the game's so short, there's a “just one more” quality to see how your new equipment looks and performs.

An online leaderboard adds some dimension for the hardcore shooter fans out there, although for me it really just meant I could throw it in my roommate's face when I scored a regional rank of No. 72 of 465 worldwide.

If you're still interested, I recommend grabbing an extra Wii remote, for starters. When I was by myself in an arcade, I would always choose House of the Dead 2 over Time Crisis because the former is easier to play using two guns. In this respect, Ghost Squad succeeds nicely. Dual-wielding two shotguns is awesome, especially when you're shaking both fists wildly to reload.

There's a party mode for up to four players, but I admit the first thing I wanted to know was whether I could play it myself. I managed my way through three-player mode, but only because I'm double-jointed in my left foot. Careful not to become too heady with power, though — to paraphrase Superintendent Pang in Hard Boiled, “Give a guy a Wii-mote, he thinks he's Superman. Give him two and he thinks he's God. Give him three and he thinks he's Mecha-Cthulhu.” I didn't play soul-consumer too long, though, because you can't unlock anything in multiplayer mode.

That's really a shame, though, considering how much mindless fun Ghost Squad is when you bring over a bunch of friends. There's still stuff to do, such as playing the game in the unlockable Ninja Mode, where the enemies are (yes) ninjas, the guns are replaced by shurikens and the helicopters are frogs with paper wings. In Paradise Mode, the Ghost Squad uses dolphin-shaped water guns to face off against a terrorist cell made up of bikini-clad women.

These two modes still aren't quite as silly as the story, however. The over-enunciated dialogue, inexplicable plot jumps, convoluted objectives and general absurdity are entertaining in that bad movie way. I mean, come on. I have an advanced “E-Targeting System” to see if an enemy's about to fire at me, but I can only keep my flashlight on for five seconds before it needs to be recharged? And how do 10 guys pop out from behind the same tree? Why are enemy soldiers shooting at me when I'm trying to defuse a mine right next to them? Is it because I'm dressed like a cowboy? No, seriously, is that why?

Ultimately, Ghost Squad is mindless fun, perhaps a bit too mindless and repetitive to want to play all the time, but certainly dependable for some quick fun. It also makes for a nice Wii arcade collection alongside Metal Slug Anthology and Street Fighter II.

Bottom Line: Good for a weekend with some friends, Ghost Squad has plenty to keep you playing — at least for a little while. Best in small doses, don't expect it to unseat Call of Duty.
Recommendation: Rent it.