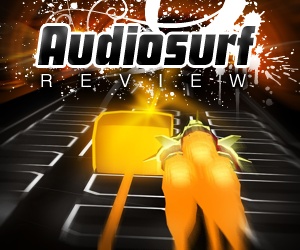 The highway pulses in time to the music. All around me the void explodes with colors and shapes. In response to the notes blaring through my speakers, colored blocks begin to appear on the highway before me. I steer my ship over one red block, then another, then quickly shift lanes to pick up a third. The audience cheers my efforts. But the music is picking up pace, and I'm starting to speed downhill. The blocks are coming at me fast and furious now; I can hardly keep track of which colors I've collected from which lanes. Suddenly, the song ends. The race is over. But like a good slave to the rhythm, I'm not done. I can squeeze in at least one more song before I've got to get to work.

Audiosurf is an Independent Games Festival 2008 finalist, and with good reason. Part racing game, part match-three game and part rhythm game, Audiosurf synthesizes these three genres into a wholly satisfying experience. The basic premise of the game is simplicity itself - you steer a ship down a three-lane highway, scooping up colored blocks into a grid and trying to get matches of three or more blocks. What makes Audiosurf such an enjoyable experience is how the highway, blocks and background is generated.

Like many other racing games, Audiosurf can import music from your collection - including CD audio, MP3s, M4As, WMAs and OGGs. Unlike those other games, Audiosurf actually analyzes each track you upload and generates a course specific to that song, using the primary instruments to place colored blocks and tempo to alter the elevation of the highway. The result is a compelling and intuitive experience, and like most things musical, you just have to be there to truly appreciate it. As your song slows, you find yourself slowing, moving uphill, weaving between lanes and casually scooping up the blocks. As the tempo increases, you start heading downhill and pick up speed until the blocks are flashing past you so quickly it's practically dizzying. Red and yellow blocks are worth more points, and you'll find more of them in the up-tempo portions of your soundtrack. The blue and purple blocks are worth fewer points, but they are easier to come by. Gray blocks get in your way as you zoom around.

Not content to rely upon this simple, yet novel mechanic, Audiosurf's developer, Dylan Fitterer, has included three play modes: Casual, Pro and Elite. As you would expect, the number of blocks increase with each rise in difficulty. But each mode has multiple characters, or ship types, as well. The simplest ship, the Mono, reduces the amount of blocks onscreen. Another ship can scoop up blocks and release them into the column of your choice. Still others can push blocks to the left or right, erase a color, or shuffle the entire grid. This allows you to completely control the gameplay intensity, which opens the game's appeal to a broad spectrum of gamer - from the casual to the hardcore.

And as if that weren't enough, Audiosurf even allows you to upload your race results to a central server, where they can be compared to other players' scores. This adds a social element to the game and is a feature that makes it an excellent fit for Xbox Live Arcade.

I've played a lot of Audiosurf over the last couple of weeks. I've raced to everything, from the Wu-Tang Clan to Nine Inch Nails to Burl Ives, and every track has been challenging in its own way and, most importantly, a lot of fun. Slower songs that I thought would be a cake walk, like The Gothic Archies' "Tiny Goat," turned out to be surprisingly complex, proving that Fitterer paid a lot of attention to the way Audiosurf interprets your music library.

Audiosurf will be officially released in February 2008. While it's a Windows based game, I've been running it quite satisfactorily under Kubuntu with WINE. You can keep up to date with the game's development on the official website and developer blog. Fitterer is up against some tough competition at this year's IGF, so I wish him the best of luck. It's the least I can do given the hours of enjoyment he's provided me with Audiosurf.

Bottom line: Audiosurf is such a simple and compelling idea, packed with several extra features to appeal to a diverse audience, that I simply can't help but recommend that you keep your eyes peeled for its imminent release and add it to your permanent collection.